[dropcap]W[/dropcap]e really don’t travel. Or, at least, we try not to. Every once in a while, we travel out of obligation. For instance, this June, Si’s youngest brother is graduating from high school. We will make the 8+ hour {round-trip} drive because we love him. 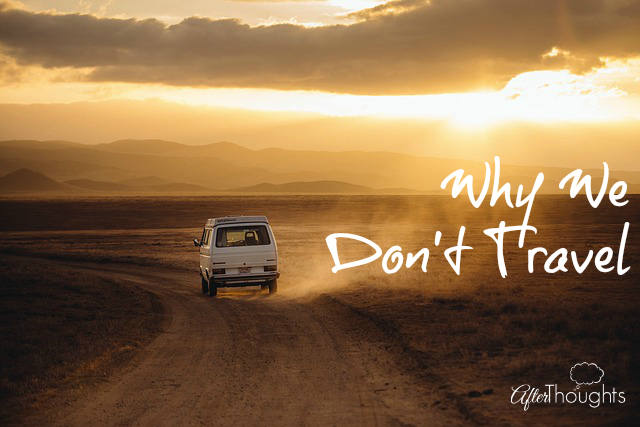 We would love him more if he moved in, say, next door. We could see him all the time, and never drive 8 hours again.

If you have been reading here the past few years, then you have already been told some of our worst traveling tales. There are more. I only tell the worst here, folks. No need to complain about everything.

So, as a refresher, there were the severe flight delays {in both coming and going directions} when I took a trip {sans children} to D.C. with Si for his Centurion commissioning when A. was an infant. And, of course, there was this past January, when we and our {sick} three children suffered a flight cancellation and we only survived because Si’s mom drove half an hour to drop off hypoallergenic foods for our oldest two babes. And I never mentioned it, but once we visited some friends of ours {you know who you are} who lived in a beautiful mountain community. On the way home, our then-two-year-old Saturn lost its transmission for the first time {never buy a Saturn Ion, by the way}.

The only traveling that seems to be safe for us is to head west and hit the lovely central California coast. We enjoy it there, and part of that probably has to do with the fact that we can drive there and drive home again without having anything bad happen.

However, if I am going to tell this story properly, I have to admit that things begin to go wrong for us before the traveling part even gets off the ground. Take Saturday, for instance. We were making a day trip {7 hours of driving total} for my nephew’s seventh birthday party. So, naturally, the night before the ants that we have been battling made a huge strategic move and nearly won the war.

They found the dining table.

I wanted to cry, and I could not stop them, try as I might.

So we ate dinner at the kitchen island.

And then, when we were doing the dinner dishes, the sink backed up. As I type, it still isn’t draining properly.

So we left feeling stressed, and dreading coming home to ants doing a victory dance and a pile of dishes that we were unable to conquer before heading out.

The drive over was so smooth I almost got confident. I told my mother that this experience made me feel better about making the even longer drive for the aforementioned graduation in June. The kids did well. There was no crying, no wet pants, nothing. We read a Little House book, and it was great. Sort of like having school right there in the car.

We left my sister’s house at 7pm, a little later than planned since we knew the drain needed to be snaked upon our return, but it was nice to be with their family again.

Forty-five minutes into our drive, one of our back tires blows out. On the infamous I-5 freeway in Orange County. In the dark. In Saturday evening traffic.

And we’re on the left-hand shoulder.

A very nice policeman followed us with blinking lights while we moved to a wider part of the left shoulder. Thump thump thump went my poor Suburban’s tire.

And then we sat there with our three patient children who I love more than ever while we waited for the tow-truck to come. I gave the baby a bottle {we were protected by a concrete wall at that point}, and then I read aloud again to keep everyone calm.

The boy thinks having a vehicle break down is just about the most exciting thing that can happen. Little A. was terrified of all the traffic noise. Baby Q. stared at all the cars flying past out the window and waved bye-bye to them all.

All one million of them.

We got home close to midnight.

We fell into bed.

The ants are still on our table.

The dishes are piling up.