I have written before that I think each child comes with a life-affirming story. Each child is a survivor. If you have had enough children for enough time, you become very aware not only of how resilient children are, but also how fragile. God sustains them, and we parents look on with gratitude. 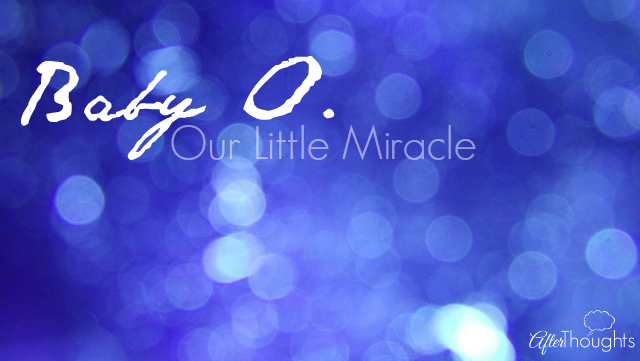 When I say Baby O. is a miracle, I mean it. It’s ironic that I anticipated writing a very boring birth story for this child. Scheduled C-sections are so routine and uneventful, right? You show up, have surgery, out comes baby {sans drama and contractions} and two-and-a-half days later, you go home and start life with your new blessing. I joked with myself that I could write O.’s birth story beforehand and then come home and edit it for accuracy.

How wrong I was.

To begin this story, I must begin with Tuesday of last week, when O. was very still all day. However, that night he moved a lot, so when I saw my OB on Wednesday and he asked if the baby was moving, I explained what had happened, but that I thought the baby must be fine. The doctor spent extra time listening to O.’s heart and checking on him. His only comment was that O. seemed surprisingly small, considering that he had measured so large earlier in the pregnancy. But there were no indications of a problem, so I went home.

Wednesday night, O. didn’t really move much. Thursday during the day, O. did not move. Thursday night, O. did not move. On Friday morning, I was shaken up. I had a pre-op appointment at the hospital, so I went through the motions and did what had to be done, but I couldn’t stop thinking about how the baby wasn’t moving. After lunch on Friday, we drove over to my OB’s office, where I planned to request a nonstress test. I figured I was over-reacting, but that a test with good results would help me to not spend the weekend worrying.

The OB office was closed. My mom paged the doctor, and he sent us to the hospital for monitoring. At the time, I was annoyed. I didn’t want to be one of those false-alarm mothers, but I also wanted to check on my baby. So I went. I called Si and asked him to meet me there. Deep inside, I really did have a bad feeling. My mom needed to take the other children home, and I didn’t want to be at the hospital alone.

We got into the hospital and onto the monitors. About five minutes into the process, I had a contraction — not a bad one at all, but the monitor showed the baby’s heart rate plunge from 150 to 60. The nurses ran in, said everything was “fine,” but rolled me on my side and put an oxygen mask on my face. The nurse in charge of me made it clear we would not be going home. One of them called the OBGYN with the news. He said he could perhaps do a C-section after 7:00 p.m. His concern was that I had just eaten lunch and they try not to perform surgery on full tummies. Well, that was four hours away. Then another contraction happened. The heart rate dropped below 60 and disappeared for a short while. One nurse scrambled to adjust the monitor to locate the heartbeat. After a while, she found it again. It became evident that with every contraction the baby’s heartrate either dropped or disappeared. Other nurses began prepping me for an emergency C-section and urged the doctor by phone to come in immediately. The nurses were all very serious and worried.

Everything happened so fast after that. It was a whirlwind of getting everything ready so that the doctor could literally walk in the room and get O. out. When the baby came out, Si took a picture, but was told quickly to not do that. Then I saw the baby. He was so tiny and thin, even though he was full term. And he had the cord wrapped around his body five times. The anethesiologist counted aloud as each wrap was untied. Also, my amniotic fluid was full of meconium. The anethesiologist later said that in all the 20,000 births he’s attended, he has never seen a situation this bad result in a baby who survives.

My baby was limp and bluish. He was taken to a nearby table where, for two minutes, he did not breathe. Si watched from a few feet away as a doctor and nurses suctioned meconium from his throat and lungs. They pushed tubes down his throat and nose to pull out the sticky, black goo. He was horrified — he thought that he was watching O. die and could do nothing to stop it. I thought all was well because the anestheiologist said things were fine. He was concerned, though, but he told me they would clean him up and he would be fine.

The baby cried once and again went limp. The nurse kept slapping his foot to stimulate his senses. Another tube went down his throat. Two minutes went by. Then another cry. And another. A nurse finally checked the clock for his birth time. Si was pretty emotional at this point, but he told me that O. had black hair, like Q. did at birth. He was trying to give me something to think about other than my worries.

O. weighed 4 lbs, 15 oz. and was 18.5 inches long, even though he was full term. The doctor later told us that the baby probably had the cord around his little body for three months, which prevented proper nutrition from getting to him. Even though his organs were functional, he had hardly any fat on his bones. His blood sugar was low, so they put him on an IV for a day. Because of all the IV and monitoring he required, he wasn’t able to stay in our room with us that first night, though the nurses were kind enough to bring him to me and let me nurse him before he received his bottle feedings. I’ve been consistently nursing and supplementing with formula to get him chubby, but that will take some time.

He is truly our little miracle. Nurses {even from other departments!} stopped in the nursery to see the “lucky” baby. The anesthesiologist told us that O. must have a special purpose in the world, because he shouldn’t have lived through that. I don’t know about a specific calling on his life, but I do know his purpose is the same as all of ours. As the catechism says, “The chief end of man is to glorify God and enjoy Him forever.”

Thank you all for your prayers. For now, we focus on helping O. grow, and also my recovery, as I ended up losing more than twice as much blood as usual and am quite weak and anemic.

If we could say anything about all of this, it would be that God alone guided O. to safety on Friday. There were so many things that could have been different, and we know that O. would not have made it through the weekend alive. We rejoice that God is faithful to protect and preserve!