Toward a Philosophy of Physical Education

But to come to the particular game with nothing but a hygenic motive
or to the tragedy with nothing but a desire for self-improvement,
is not really to play the one or to receive the other.
Both attitudes fix the ultimate intention on oneself.

–C.S. Lewis, An Experiment in Criticism

[dropcap]I[/dropcap] have a love-hate relationship with sports. When our son was playing T-ball, he was so cute. Of course, his favorite part was climbing the backstop. I distinctly remember watching his coach pluck him off the fence like fruit from a tree, only to see him climb right back up. He might not have been the star player, but he was the shortest and climbed the highest, so I got prideful about it anyhow. 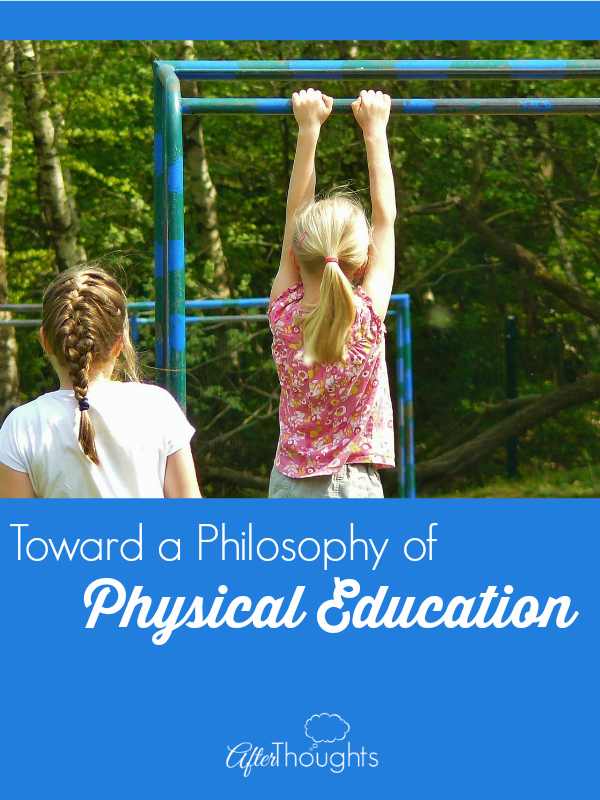 And then there are the lovers.

My sister’s family is like this, and I have a cousin who is, too. They love sports. They just do. The parents love them, the kids love them, and it is something they all do together. They have a great time, they bond, they get or stay in good shape, they reap all the benefits.

My husband was a kicker for a football team in his youth and we spent the first couple years of our marriage heading to the park so that he could kick around. He just loved kicking.

Love compels in a way that other things cannot.

So the question arises as to what to do with a boy who doesn’t want to play sports. A boy who might be a bit shy of the crowd of parents watching.

One of the reasons I’m asking this question is because many homeschooling parents use sports as P.E. They don’t teach physical education in their school.

I, on the other hand, tend to use a trampoline.

I know I’m not the only one. You know who you are.

Anyhow, another way of asking the question is to say how do I pursue physical education {as required by the State of California} according to my child’s natural bent?

A Brief and Terribly Incomplete History of Physical Education

And as I was thinking about all of this, I started to wonder what the deal is with physical education. Why was it ever part of the curriculum in our state? In the world? What is the purpose? Other ideas, like professional sports or keeping our girls looking like models have, I think, crowded out an original intention or two.

So my first thought was back to Poetic Knowledge

{my favorite book ever, ever, ever, amen} and the classical idea of the gymnastic. The student is a whole person and there is an extent to which knowledge is worked out when the student applies it with his body. In the book, the example is given of a student who couldn’t understand physics until he performed manual farm labor. As he worked, the concepts of pulleys, levers, and such became vivid to him. What he had learned at school {or not learned as the case may be} didn’t come alive until that moment.

So we have one principle here, and that is that the awareness of their bodies and their use of tools in certain types of physical activities will enhance their understanding of the world. There is a dynamic interaction which takes place, where the theories in books come alive in the world and the student begins to not only understand the theories, but also why anyone would have considered thinking about such things in the first place.

I did a little research about the Greeks and also learned that gymnastic training was considered so integral to schooling because children were being reared to be good citizens of the Empire. Gymnastics was essentially a form of military training for the youth of the nation. The Hilter Youth practiced something similar, as did many European nations. I think that even Charlotte Mason’s Swedish Drill originated from preparing young men for hand-to-hand combat in their adulthood.

But Charlotte Mason was able to rise above the imagery of war, reach back into Greek culture, and focus these benefits on a broader scale. Mason talked about the formation of heroes.

Let’s savor this and not rush right over it:

the formation of heroes.
She wrote:

All the same, it is questionable whether we are making heroes; and this was the object of physical culture among the early Greeks, anyway. Men must be heroes, or how could they fulfil the heavy tasks laid upon them by the gods? Heroes are not made in a day; therefore, the boy was trained from his infancy in heroic exercises, and the girl brought up to be the mother of heroes.

She goes on to suggest that while many men in her time were prepared to die as heroes, not so many were trained to live as one.

What we are talking about with classical education really is, in a way, a rearing of everyday heroes.

The object of athletics and gymnastics should be kept steadily to the front; enjoyment is good by the way, but is not the end; the end is the preparation of a body, available from crown to toe, for whatever behest ‘the gods’ may lay upon us. It is a curious thing that we, in the full light of Revelation, have a less idea of vocation and of preparation for that vocation than had nations of the Old World with their ‘few, faint and feeble’ rays of illumination as to the meaning and purpose of life. ‘Ye are your own,’ is perhaps the unspoken thought of most young persons — your own, and free to do what you like with your own.

But if children are brought up from the first with this magnet — ‘Ye are not your own’; the divine Author of your being has given you life, and a body finely adapted for His service; He gives you the work of preserving this body in health, nourishing it in strength, and training it in fitness for whatever special work He may give you to do in His world…It would be good work to keep to the front this idea of living under authority, training under authority, serving under authority, a discipline of life readily self-embraced by children, in whom the heroic impulse is always strong. We would not reduce the pleasures of childhood and youth by an iota; rather we would increase them, for the disciplined life has more power of fresh enjoyment than is given to the unrestrained.

There are many attractive phrases in this passage, but my favorite is: a body finely adapted for His service.

Is this not the essence true heroism? Being adapted for His service?

Of course, we must keep this as part of the whole in our minds. When I have thoughts like this, which is to say that I am thinking the thoughts of other {wiser} minds long after they originally thought them, I am often tempted to change focus. After all, if physical prowess helps make a hero, why not drill the children a couple hours a day?

Well, because physical aptitude without proper nourishment of mind and spirit breeds not a hero but a brute, that’s why.

A Nation of Everyday Heroes

I don’t think that our nation will be improved by me, myself, attempting to produce two heroes and two mothers-of-heroes. I really don’t. However, when I read that classical Christian day schools are growing in number, that more families are homeschooling each year and that those families also tend to have more children besides, well, then I have great hope.

Sure, some of those kids will rise above and stand out as the Washington and Franklin of their age. But my hope is that they stand out among a generation filled with everyday heroes, raised in such a way that they are fit for heroic deeds performed in the course of everyday life.

To go back to the Lewis quote with which I began this post, we are turning the focus of physical training in its many forms from being a personal quest into a duty performed in the service of others. It is loving-your-neighbor worked out in the flesh. After all, can a weak man push a stalled car out of an intersection? Yes, love of the game, of the activity, is wonderful. I think love is a great motivator. But love of our fellow man can compel us still further.