[dropcap]I[/dropcap] found myself thinking about reading comprehension this past week while we were traveling. {I am the same person who emails a friend regarding curriculum when I should be packing … this sort of thing is always on my mind.} I was thinking about how trips like these open the world up for children {and for their parents, of course}. 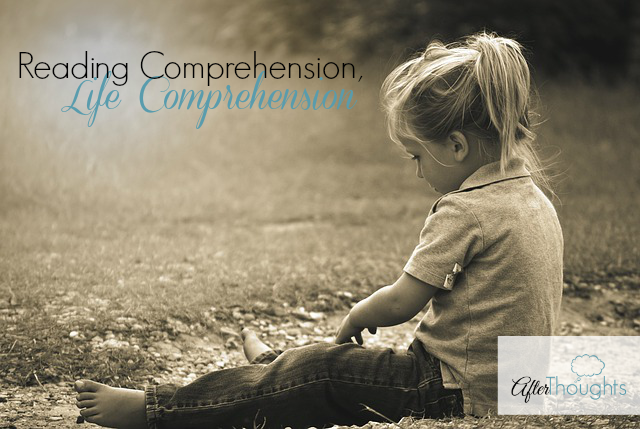 I remember that when I was in elementary school, I had attended a magnet school for the gifted, which was the district’s attempt to get upper- and middle-class children into an urban wasteland’s neighborhood school.

I consider this a learning experience for me on so many levels.

One thing I remember specifically was that the poor children took a field trip once a year to the beach. Like all children, the children in my class were interested in fairness. So we asked our teacher why we didn’t get to go to the beach also. {Can you hear the whining in our voices?} The teacher must have been feeling very Socratic that day, for he simply asked everyone in the room who had ever been to the beach and seen the ocean to raise their hands.

And then he explained that the children from the neighborhood, those children in the other classes, they had never been. And they never would be. Their families didn’t have the money to go, and it was possible that those children would live their whole lives and never see an ocean outside of a magazine or some wallpaper mural in the mall.

This quieted us all down. After all, we all delighted in writing our “About My Summer Vacation” composition at the beginning of each school year, it never dawning on us that the children in those other classrooms weren’t asked to write a similar essay.

I don’t remember the teacher’s exact words, but I remember thinking that he understood. He knew that comprehension involved more than reading a book about a subject. He knew that seeing the ocean, feeling the sand between the toes, feeling the waves tug at the ankles when they pull back, seeing the gulls diving for fish, and walking on a pier, all had significance. He knew that, after such a trip, the children could read a book about the ocean with a new level of understanding.

Now levels of understanding are interesting things because we never reach the top level {where God is, knowing everything there is to know}, and so life is an adventure for us, regardless of our circumstances.

What interested me was seeing my children reach these new levels of understanding. Two of them had never seen an ocean before {well, perhaps one glimpsed it at 8-months of age while waking from a nap}. The two-year-old asked all sorts of funny questions as she tried to comprehend exactly what all that water was about. The baby cried the first time he felt sand on his hands, but within thirty minutes, his opinion changed, and later we found ourselves cleaning sand out of his diaper.

The older two were exploring the world in ways I wouldn’t have connected with when I was their age. For instance, when they discussed the birds, they used their real names. They didn’t say, “Look at that bird!” but rather, “Look at that sea gull!” Or they asked what a bird was, or looked it up in their field guide {the four-year-old can’t read, but she knows where to find a seven-year-old who can}. And so I overheard more than once a backseat conversation concerning the merits of the brown pelican, or plans to maybe hunt that egret and get it to let them touch it {this comes from having pet ducks; they think all birds should allow petting}.

The fact that they can distinguish between various birds {or know when they see a new one} is tribute to Charlotte Mason, and her passion for nature study. I see now that there is an understanding of the world available to Sons of Adam who know the names of the animals.

And when I heard my son yell, “Look! A blackcapped chickadee!” while looking out our sliding glass door, I thought that he, becoming intimate friends with the birds, will understand poetry that would have been enigmatic to me as a child. Take, for instance, an excerpt of Eric Ormsby’s To a Chickadee in Winter:

The chirp you hurl defines humility
As something almost savage in its swoop.
Discalced against December, Chickadee,
You snap the frozen seed-husks as you stoop.

All of this is to say that reading lessons cannot be separated from the rest of life, for reading is an endeavor to understand and learn about real things. May we never forget that words do not exist on their own, but rather as symbols and expressions of the things which are.

Farmer O. is 12. Still letting that sink in. He

"I don’t know about you, but I am not a grand co

I have said this in #charlottemasonbootcamp a zill

We just entrusted E-Age-18 to both this school and