There was a time when I eschewed all things princess. I had adored Disney growing up, and when I began reading the original fairy tales and realized how Disney had stripped them of almost all of their meaning, those same movies I had once loved rang hollow to me. Around this same time, I had my first daughter, and everywhere I looked there was “Princess” garb. The word was plastered on socks, onesies, dresses, and bibs. During that time, the word “princess” became equated in my mind with “spoiled brat who thinks she is royalty.”

Oh, the stories I could tell, but that would hardly move this post forward, so you’ll just have to trust me.

So, while, once upon a time, I thought of my future daughters as “little princess,” I found myself at a point of tension {I know you are all shocked by this seeing as I am so relaxed about everything as a general rule}.

Enter Daughter Q., who has recently grown her affection for princesses from a bloom to a blossom. She adores princesses. Her grandma sent her older sister a princess dress a year ago, and suddenly, Disney’s Snow White was showing up at breakfast.

And during chores {she wasn’t too proud to work!}.

You get the picture.

When I asked her, about eight weeks ago, what sort of cake she wanted for her birthday, she confidently announced that she would have a Princess Cake.

You may recall that I have the necessary supplies for crafting a princess cake, which I procured for the Annabelle Cake last spring. But a princess cake? Really?

I found myself pondering this little one. Was this something I really wanted to encourage?

I had recently found myself, ironically enough, defending fairy tales, and beautiful princesses in particular, on a Yahoo group to which I belong. I decided to go and reread what I had written, and in the process I convinced myself to throw a full-fledged princess party. Here is a bit of what I had written:

Recently, we read The Princess and the Pea {original version}. It was interesting to all of us, how the prince couldn’t seem to find a real princess, how many girls looked like princesses, but weren’t. It actually fell right in line with the Prov. 31 verse above when we thought about it. So we discussed how the princess was put to the test, a test of physical sensitivity. Somehow this ended up being a discussion on real sensitivity. If the prince was looking for a good wife, what sort of wife should he find? Would she be kind? Would she be sensitive to the needs of others? How is that like being able to feel a pea 100 mattresses or whatever down? And the other girls, did they look like princesses? Were they authentic? Why not? This became a wonderful, wonderful conversation within the group {7yo boy, 5 and 4 yo girls that day}.

When I read the text, there is so much in the old stories that is drowned out by the fact that I was exposed to Disney versions that turned them into nothing but vapor, rather than the lasting truth tales they were meant to be. I have to work to see what they were really intended to mean. My children, however, are untainted by the modern retellings, so they tend to “see” more clearly than I sometimes.

I understand that some daughters are just very tempted to be vain, and I would never suggest stumbling a child. But we must keep Beauty and hold her fast, for she is the companion of the Gospel and without her the world is a dark and chilly place to live.

When I reread, I realized I had already answered my own question. I myself said that my children are not tainted by the Disney versions. I am, and my hesitation is based on all the faulty associations of my own mind, not the reality of princesses and ancient tales about them. In fact, my daughter only calls the Snow White dress a Snow White dress because her mother told her that was what it was.

To her, it is just a pretty dress.

My eyes were opened and I realized that this little one was simply enjoying the beauty of something. She loved the pretty dresses and the crowns, and she loved to see them not just on herself, but on her sister and her friends.

Now, affection for princesses is rather low on the list when it comes to love of Beauty, but what I see in this is something which can be developed, not something which should be crushed. It is innocent, and a joy.

So, we threw a princess party. Her grandparents gave her a beautiful new princess dress for the occasion. Her very exuberant little friend, who we adore, came dressed as Cinderella, and they wore crowns and tossed beanbag lady bugs onto flowers and had a grand time. To the dismay of the men in our family, we played opera music in the background {that is our official princess music}.

And it was beautiful. And it was fun. And her mother really needs to loosen up.

So, my little daughter is three now. What a year it has been, raising such a funny, happy child. She is a joy to us, princess dress and all. 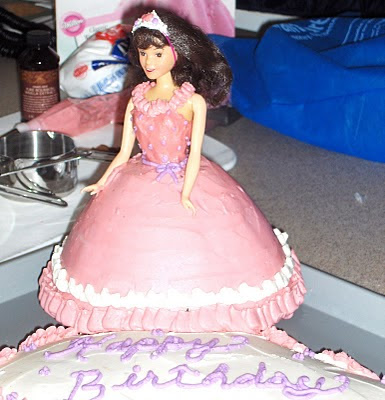 a cake fit for a princess

Lessons with the Easily Overwhelmed Student