Father of the Year

June 21, 2010 by Brandy Vencel
My husband won Father of the Year hands down. Granted, there was little competition here on the microhomestead, but even if there had been, Friday night sealed the deal. Some fathers lounge around on Friday night. Mine makes me nervous by saying things like, “Hey, you think tonight is a good night for ________________?”

Anyhow, here is a photo: 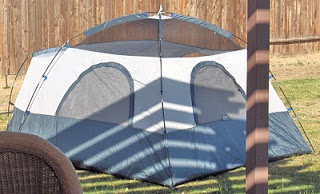 Yes, that man is brave. He slept in this contraption with an eight-year-old, a five-year-old {who was ecstatic, by the way, and all of her jumping up and down was reminiscent of dribbling a basketball}, and a three-year-old {who was happy, yet sober}.
I, on the other hand, remained inside in order to be within hearing distance of Number Four, who was best left in his crib for the night.
In all, it was a great success, though they were surprisingly cold.
A. said they could see stars through the top.

Lessons from Charlotte: On Kindergarten

Lessons from Charlotte: Guidelines for Lessons

1. Ourselves 2. The Social Skills Guidebook 3. Nutrition and Physical Degeneration 4. What Jane Austen Ate and Charles Dickens Knew 5. Waverly 6. The Complete Father Brown Stories 7. The Lion and the Saint 8. Summer of Monkeys 9. The Ruins of Gorlan 10. The Boy Who Harnessed the Wind 11. The Burning Bridge 12. Northanger Abbey 13. The Icebound Land 14. The Lost Baron 15. The Baronet's Song 16. The Sea-Hawk 17. The Shepherd's Castle 18. Harry Potter and the Half-Blood Prince 19. The Boat Who Wouldnt Float 20. The Giver 21. Gathering Blue

Tonight, I prepped my lesson. Tomorrow, I begin my

Someone was a little annoyed with pre-algebra toda

What if you poured yourself out homeschooling your

Soul care on tap. Today I started reading this b

When you are the youngest child, the copy of TH Wh