Lessons from Charlotte: Habit is Ten Natures {Part I}

[dropcap]P[/dropcap]art III of Charlotte’s first volume, Home Education: Training and Educating Children Under Nine, is called Habit is Ten Natures. I talked about this a little bit in my post Nipping it in the Bud early last week. This portion of the volume, just as the previous portion, can be divided into two parts. The first is how Charlotte came to this conclusion {that habit training is imperative for a sound education}. The second is some practical matters concerning Miss Mason’s approach to formation of good habits.  We’ll discuss the former today and the latter in the near future. 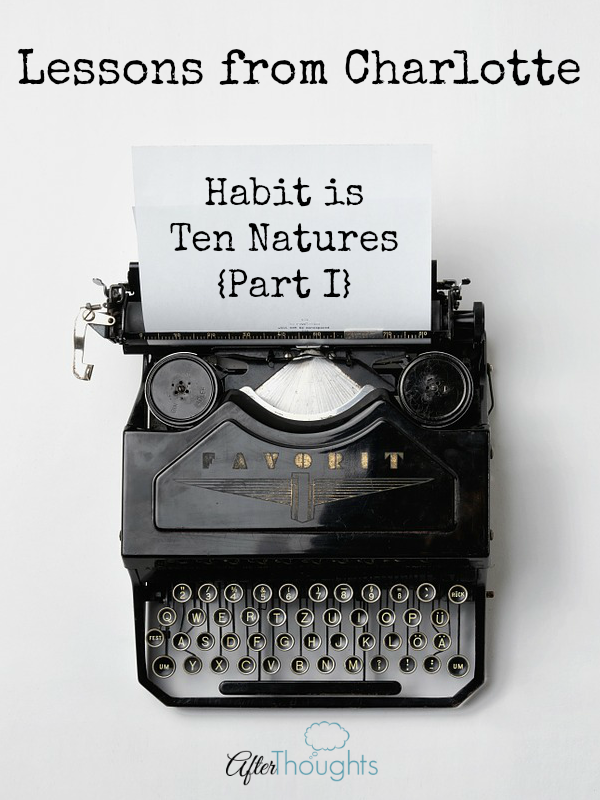 Incidentally, if you want to study habit training in depth, I would highly, highly suggest reading all of Volume V: Formation of Character as well as the pertinent sections from Volume VI: A Philosophy of Education. {There is probably quite a lot also in the volume Parents and Children, but I’ll be honest and say that I haven’t read a bit of that one yet and can’t say for sure.}

Okay, so, why and how did Charlotte come to her conclusion? She tells us that she regularly heard from the pulpit of her church — perhaps as often as once per month — that habit is ten natures. During the time that she was listening to sermons containing this wisdom, she found herself to be a young teacher, full of zest for her students … and frustrated by the results of her efforts. She found the children to remain mostly unchanged by the process of education, other than “being able to do harder sums and read harder books.”

And why did they remain unchanged? She concluded that children “have no self-compelling power.” They simply do whatever it is the easiest thing — the thing that is according to their nature. Their natures, in turn, are strengthened by the “exercise” of acting in accord with them.  Here is a good time to jump forward and see how Charlotte defines nature:

Human Nature the Sum of Certain Attributes. — What, then, with the natural desires, affections, and emotions common to the whole race, what with the tendencies which each family derives by descent, and those peculiarities which the individual owes to his own constitution of body and brain, — human nature, the sum of all these, makes out for itself a strong case…

This is a summary of what she had previously broken down in depth. So, for instance, the “desires, affections, and emotions common to the whole race” involve those things common to the human race which are even, for instance, observed in primitive tribes by missionaries. People are born desiring knowledge, society, and esteem from others, just to name a few. Likewise, we all know love, joy, grief, and so on. Next, we have our inherited traits — the tendencies we have in common with our specific ancestry. And lastly we have just plain us, the characteristics which are all our own, including but not limited to our constitution {how naturally strong or weak, healthy or sickly we are in body}.

So, Charlotte says that our natures “make out for themselves a strong case:”

[W]e are inclined to think the best that can be done is to let it alone, to let every child develop unhindered according to the elements of character and disposition that are in him.

Children, on the other hand, have “no strength of will” and are “incapable of making steady effort.” They have “no power to make themselves do that which they know they ought to do.” Children left alone, then, simply run their natural course, which implies both good things and bad. Charlotte at this point echoes the words of classical educators for millennia:

It is the business of education to find some way of supplementing that weakness of will which is the bane of most of us as well as of the children.

Here, we meet up with Norms and Nobility. Charlotte is essentially asking the question, Can virtue be taught? as well as, How is virtue taught? We know that it went without question {until the days of Darwin and Dewey} that virtue could in fact be taught, and ought to be taught. “Virtue is the end of learning,” asserts David Hicks, and he in good company

. Mason agrees with him, and considers an education which does not result in virtue to be fruitless. The ancient debate was over how virtue was to be taught. Charlotte’s answer is that virtue is acquired into the character over time through, among other things, formation of proper habits.

Well, we are already halfway there. Miss Mason was searching out a way to teach virtue because she had noticed that children are naturally less-than-virtuous, remember? Not that they don’t have their good points, but that they do not naturally improve much at all over time. In some cases, she noticed something more frightening, which was decline over time. The children were running into bad habits, becoming less virtuous as the years went by.

To take her argument a bit out of order, I think that Mason’s strongest point in this regard is that humans are creatures of habit. Period. Therefore, people either have good habits, or they have bad habits. Mason said that “habit rules ninety-nine in a hundred of our thoughts and acts.” Because of this, we do children a very great favor in helping them form good habits. And what about the 100th time? That time when a body needs to make a choice? Mason says:

And the little emergencies, which compel an act of will, will fall in the children’s lives just about as frequently as in our own. These we cannot save them from, nor is it desirable that we should. What we can do for them is to secure that they have habits which shall lead them in ways of order, propriety, and virtue, instead of leaving their wheel of life to make ugly ruts in miry places.

Moreover, the habits the child has will necessarily impact that once-in-a-while decision they must make:

And then, even in emergencies, in every sudden difficulty and temptation that requires an act of will, why, conduct is still apt to run on the lines of the familiar habit. The boy who has been accustomed to find both profit and pleasure in his books does not fall easily into idle ways because he is attracted by an idle schoolfellow. The girl who has been carefully trained to speak the exact truth simply does not think of a lie as a ready means of getting out of a scrape, coward as she may be.

If that last part about cowardice is a bit confusing, let me put it in context. Mason uses the example of the fearful child. The nature of the child is one of cowardice. The temptation which runs with the nature is to use falsehood to avoid, for instance, consequences of which the child is afraid. The idea is that if the child is trained to be exactly truthful, lies will not come as easily as they would naturally. The habit, then, is the antidote to the temptations associated with the Nature.

As Mason was exploring this idea of habit being stronger than Nature, she read the work of a physiologist named Dr. Carpenter. He explained that our actions actually form themselves into our tissues, so to speak. The structure of the brain is like a muscle. A repeated action “strengthens” that part of the muscle which is responsible for the action. Over time, the action becomes akin to a reflex. The learned behavior, then, becomes easily done.

Charlotte said that after reading the work of Dr. Carpenter, she concluded that herein lies the power of habit: it is written into the physical tissues of the body. In other words, habit is stronger than Nature because there is a very real, physical sense in which it supersedes Nature, being itself written into the body. Nature is still there, yes, but there is also something just as real present in the person, and those are the good habits the parents and educators in the child’s life have helped him to form.

We all know that it is easier to run with our Nature. The real work of the will in a child is not in throwing a tantrum, but in having enough self-control to not throw a tantrum. Real strength is required not in asserting my wishes to Mommy, but in learning to submit when I cannot have my way. In many ways, Mason is encouraging parents help their children become intimately familiar with that path of self-denial which the Christian is called to trod.

Next time, we’ll discuss the rest of the chapter, the very basics of how Charlotte suggested forming habits in children.