[dropcap]I[/dropcap]n Part I, we discussed why Charlotte Mason was {1} interested in discovering a “lever” to lifting children up and out of their natures, and {2} why she determined that habit had the power to be just such a lever. Today is Part II. Charlotte gave a bit of information on basic habit formation {and I emphasize again that if you want the 401, rather than the 101, course, you’re going to need to crack open Volume V: Formation of Character} in this same chapter, so now seems to be as good a time as any to discuss how it might be done. 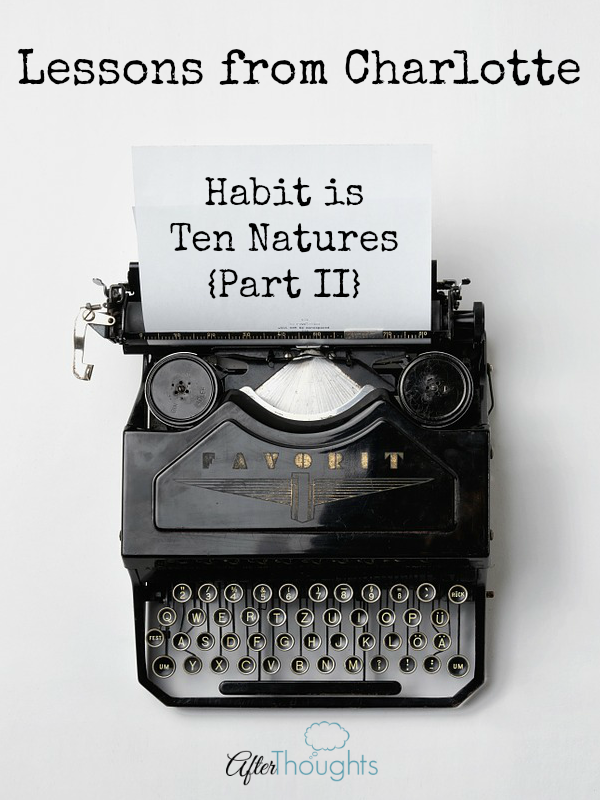 I have had mixed results in my attempts at habit formation, and something near the end of the chapter helped me determine where I have taken a misstep or two.

First, we must repeat the concept of nipping these things in the bud. Charlotte used this phrase herself! I didn’t realize that before. Charlotte explains that often we do something because we saw someone else do it. We do it a few times, and suddenly, a new habit is born. This can be a good thing or a very bad thing, depending on the issue:

It is necessary that the mother be always on the alert to nip in the bud the bad habit her children may be in the act of picking up from servants or from other children.

Children experiment. There are a couple ways to deal with this: {1} keep them away from bad influences, and {2} “nip it in the bud.” Everyone is going to have to do a bit of both. It is just that simple.

Because even we parents can be bad influences from time to time. It’s that whole sin thing.

I have truly found it effective to watch and see the first time our children try some or other bad habit. Then, I just say something like, “No. We don’t do that.” If they tell me they saw So-and-So do so, I just reaffirm that we, in fact, do not do that. Sometimes it is that simple. Other times, I keep them home from an event or activity that I think they can’t yet handle.

To use a neutral example, when we needed to be on a GFCF diet {due to severe food allergies}, the older two children were quite young. I wasn’t going to expect a three-year-old to practice self-denial and decline when someone offered her a cookie. Instead, I tried to keep her away from activities that were centered around shared eating {like a pizza party}. I fully expected that, if we needed to continue the diet, a day would come when she would have the strength of will to make the right choices. But I didn’t want to put her in the position of regularly weeping over her food. Therefore, we avoided certain situations.

We all can guess at what our children can and cannot handle, can we not?

Okay, so let’s say Mommy decides to set out to train her children in a habit. Perhaps they are ready to make their beds daily, close the door behind them when they go outside, clear the table when they are finished eating, or whatnot. Even more difficult, let’s say that Mommy has realized that one of her children has a bad habit, from which he requires breaking. Step one, sayeth Charlotte, is for Mother to:

… devote herself for a few weeks to this cure as steadily and untiringly as she would to the nursing of her children through measles.

In other words, this is not for the weak. In fact, I would say that Step Two should probably be “pray for strength to persevere to the end” because that is where we mothers often fail. We start a good thing, but we do not finish, and sometimes the result is that the bad habit ends up being strengthened, leaving the child worse off than he was initially.

I know that sometimes in our house, when we are about to “crack down on” something {or simply begin a new good habit, such as potty training}, we commence on a Friday evening, when my husband is at home and there are two of us to persevere together.

Okay, so far we have:

Next, we have Mother’s approach. Mother {or Father … Mason says Mother, but we start a lot of things with our son with Daddy rather than Mommy} should first speak with the child {if the child is old enough}. Mason doesn’t say this needs to be a particularly long talk, but that the child and Mother need to be on the same page. In the instance of forming a new, good habit, Mason suggests challenging the child:

‘Johnny,’ she says, in a bright, friendly voice, ‘I want you to remember something with all your might: never go into or out of a room in which anybody is sitting without shutting the door.’

‘I will try to remind you.’

‘But perhaps I shall be in a great hurry.’

‘You must always make time to do that.’

‘Because it is not polite to the people in the room to make them uncomfortable.’

‘But if I am going out again that very minute?’

‘Still, shut the door, when you come in; you can open it again to go out. Do you think you can remember?’

‘Very well; I shall watch to see how few “forgets” you make.’

Having in a few — the fewer the better — earnest words pointed out the miseries that must arise from the fault, and the duty of overcoming it, and having so got the {sadly feeble} will of the child on the side of right-doing…

I usually tell my children that we must practice being the sort of people we wish to be. If we do not wish to be liars, for example, we musn’t practice lying. This is a good fall-back reason if we have trouble thinking of particulars.

Mason’s underlying point through these conversations is to make Mother and child a team. Mother is not the child’s adversary, but rather more like a coach, cheering him on, helping him to become better than he presently is.

At this point, then, the fault being eliminated is simply not allowed, or the new good habit is expected to appear. Period.

In the case of the door, Johnny remembers a few times, but then forgets. Mother, because she is committed to this cause, is watching Johnny, waiting for him to forget, so that she can remind him:

She does not cry out, ‘Johnny, come back and shut the door!’ because she knows that a summons of that kind is exasperating to big or little. She goes to the door, and calls pleasantly, ‘Johnny!’ Johnny has forgotten all about the door; he wonders what his mother wants, and, stirred by curiosity, comes back, to find her seated and employed as before. She looks up, glances at the door, and says, ‘I said I should try to remind you.’ ‘Oh, I forgot,’ says Johnny, put upon his honor; and he shuts the door that time, and the next, and the next.

In the case of the dawdling child who is being broken of her dilatory habits, Mother, again, is on the watch:

The child goes to dress for a walk; she dreams over the lacing of her boots — the tag in her fingers poised in mid air — but her conscience is awake; she is constrained to look up, and her mother’s eye is upon her, hopeful and expectant. She answers to the rein and goes on; midway, in the lacing of the second boot, there is another pause, shorter this time; again she looks up, and again she goes on. The pauses become fewer day by day, the efforts steadier, the immature young will is being strengthened, the habit of prompt action acquired.

Mason also suggests giving the child the lightest touch if her mind has really wandered off.

In breaking a habit, there is the additional step {if suitable for the situation} of giving the child a challenge:

By-and-by, ‘Do you think you can get ready in five minutes to-day without me?’ ‘Oh, yes, mother.’ ‘Do not say “yes” unless you are quite sure.’ ‘I will try.’ And she tries, and succeeds.

Now we reach the point where I believe my methods have fallen apart in the past. When the dawdling child in my home, for instance, began to dress and make her bed in fifteen minutes, when the child leaving the door open appeared to have a good habit of closing it when he went outside, I stopped watching. I even closed it for him. I overlooked that, suddenly, dressing took the entire fifteen minutes.

I mistook early victories for success, and then ignored obvious failures, hoping they were one-time events.

Mason says that we mothers, in letting them slide so soon in their new habits, are failing to understand the nature of habits themselves.:

[A] habit is a delight in itself; poor human nature is conscious of the ease that it is to repeat the doing of anything without effort; and, therefore, the formation of a habit, the gradually lessening sense of effort in a given act, is pleasurable.

Here is Mason’s most important point in regard to this subject: when we form a habit, we are lessening the effort required to perform the task. We mothers often think that making the bed is as hard on Day Thirty as it was on Day One, and we are wrong:

This is one of the rocks that mothers sometimes split upon: they lose sight of the fact that a hiabt, even a good habit, becomes a real pleasure; and when the child has really formed the habit of doing a certain thing, his mother imagines that the effort is as great to him as at first, that it is virtue in him to go on making this effort, and that he deserves, by way of reward, a little relaxation–she will let him break through the new habit a few times, and then go on again. But it is not going on; it is beginning again, and beginning in the face of obstacles. The ‘little relaxation’ she allowed her child meant the forming of another contrary habit, which must be overcome before the child gets back to where he was before.

So the last step is simple: guard the habit. Guard it with diligence. Don’t get tired. Don’t stop. The easiest thing, over the course of extended time, is to maintain the good habit.