[dropcap]C[/dropcap]harlotte Mason believed that children under nine should spend four to six hours outside on every nice day. Yesterday, we discussed why she thought this should be done. Today, we’re going to talk about what she expected to be done during that long period of time, especially since she also says, “no books.” She equates going outside to going to a carnival or other attraction — would you take a book and read when there is so much going on around you? 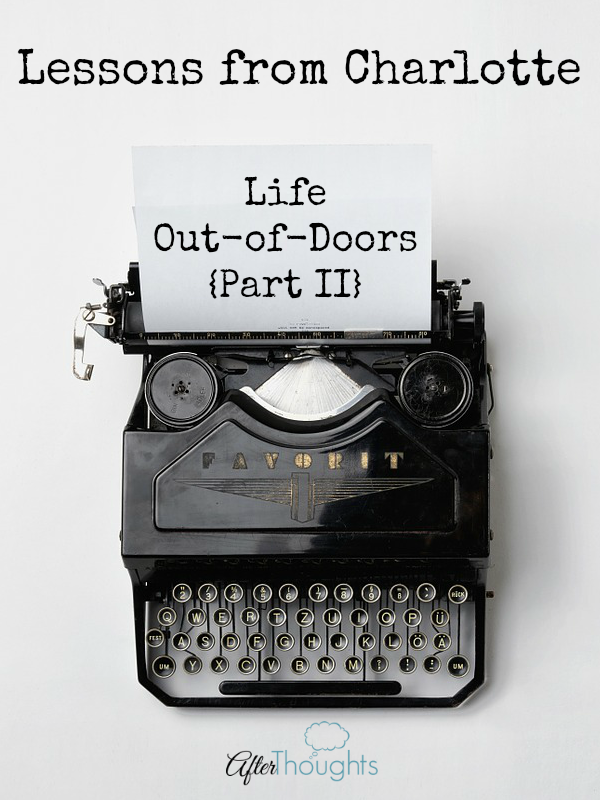 First, Charlotte says that the children will engage in rigorous play for at least an hour, if not two. {Methinks Mommy should definitely bring a book if this is the case. Never let a good playtime go to waste!} So now we are down to only two to four hours to fill.

At least some of this will take care of itself.

Charlotte gives us a whole bunch of ideas:

I really think of it as a treasure-trove of ideas, though. I am not a natural at this, so being armed with a list of ideas will help a person like me. No need to reinvent the wheel!

If this sounds like a huge responsibility for the mother, I would say that it is … and it isn’t. Over and over, Charlotte emphasizes the mother simply offering this environment and then, for the most part, getting out of their way, other than making sure they stay safe. The mother is there to answer questions, not to give lectures. The children will wonder about what they are seeing or hearing, and they will come and ask, and that is the time for a small lesson or two. As far as taking command of the situation, Charlotte suggests that happen no more than perhaps once per week, even as rare as once per month. Most of their direct learning will come when they are ready for it, when they ask a question.

I am thinking that if I can make myself available to them, and arm myself with a birding book

, and my Handbook of Nature Study

{to use in the event of the inevitable questions}, we’ll do pretty well.

My question today is: do I keep reading? Or, do I write down some ideas for this large portion of our kindergarten studies, and then get back to reading after I’ve got something on paper? Hmmm…

Lessons from Charlotte: Habit is Ten Natures {Part I}