Lessons from Charlotte: Paying Attention is a Mental Habit

[dropcap]T[/dropcap]his next topic can, unfortunately, be considered a bit controversial. After all, in a world of epidemic ADHD, children find a million excuses for not paying attention, and the adults in their lives tend to coddle them. This doesn’t mean, incidentally, that I don’t believe that some children have a much harder time than others. I had a child with ADHD-like symptoms at one point, and we changed her diet and that did miracles. Charlotte already, if you recall, talked about providing the optimal environment for brain and other physical growth and development. 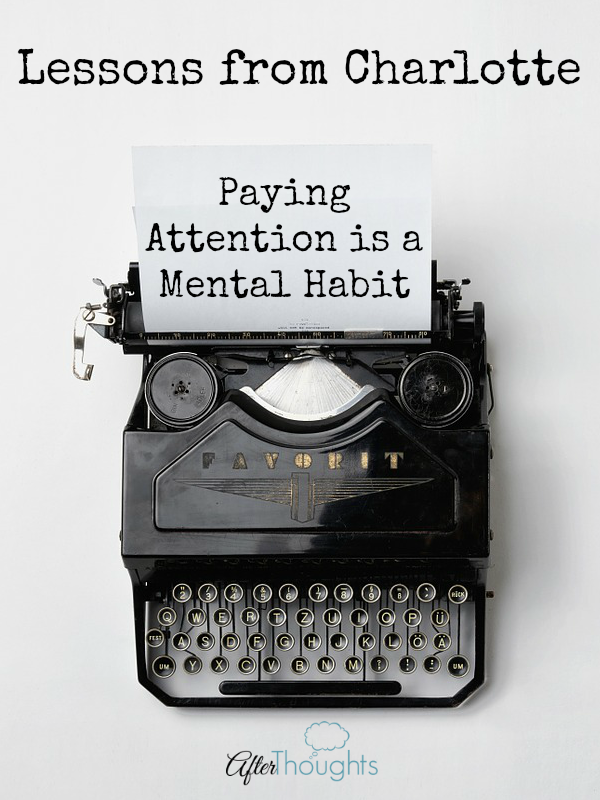 Charlotte has a list of mental habits that ought to be developed in children, and one of them is attention. I do not think, however, that if Charlotte were alive today and saw the epidemics in our society, she would only say to build the habit. She would look at the child’s whole life. Does he watch television? Postman wrote years ago that this builds bad thought habits. Does he have food allergies? Does he eat a lot of sugar? Does he get enough sleep? Charlotte taught that the conditions for healthy brain activity were our initial, preliminary considerations. So we need to think about her mental habits in light of the fact that she has assumed, at this point, that we have done our best to provide said environment as the foundation upon which to build these habits.

Charlotte has a list of six imperative mental habits:

I was going to try to cover all of them in one post, but I find that attention requires a lot of … ahem … attention … therefore, I’ll save the other five for a future post.

The Habit of Attention

First, why is this important? Charlotte points to the greatest men. They are distinguished by, among other things, their power of attention. They are able to fix their minds on something for a very long time, sorting through issues. One of the distinguishing marks of a highly educated, intelligent person is this habit of attention:

[C]ontrast this with the wandering eye and random replies of the uneducated; — and you see that to differentiate people according to their power of attention is to employ a legitimate test.

We are talking about producing highly educated, virtuous people. We do our children no favors by letting them remain as they are — easily distracted, undisciplined in their thoughts, incapable of controlling the direction of their thoughts.

You see, we are all born this way.

A baby, notwithstanding his wonderful powers of observation, has no power of attention; in a minute, the coveted plaything drops from listless little fingers, and the wandering glance lights upon some new joy.

The modern response to this is to provide a playroom full of toys, that Baby might never get “bored.” I have seen some women whipping out new toys as fast as some men flip through television channels. This is training the habit of inattention, which is something we’ll come back to.

Charlotte says that there is a law which governs the way we think. She calls it “association.” One thought leads to another, no?

In the wanderings of delirium, in the fancies of the mad, the inconsequent prattle of the child, and the babble of the old man, we see the same thing, i.e. the law according to which ideas course through the mind when they are left to themselves. You talk to a child about glass–you wish to provoke a proper curiosity as to how glass is made, and what are its uses. Not a bit of it; he wanders off to Cinderella’s glass slipper; then he tells you about his godmother who gave him a boat; then about the ship in which Uncle Harry went to America; then he wonders why you do not wear spectacles, leaving you to guess that Uncle Harry does so. But the child’s ramblings are not whimsical; they follow a law, the law of association of ideas, by which any idea presented to the mind recalls some other idea which has been at any time associated with it–as glass, and Cinderella’s slipper; and that, again some idea associated with it. Now this law of association of ideas is a good servant and a bad master.

Once the child gains the habit of attention, he has been liberated from a careless, undisciplined mind, and we can use the law of the association of ideas as a proper servant in his learning.

So how does Charlotte train attention? Well, she starts with babies. When Baby drops a toy, mother does not reach into her bag and get a cooler, flashier toy. Instead, mother picks the toy back up and attempts to engage Baby’s interest for another minute or two. In other words, the mother takes small steps toward attention from the very first days of Baby’s life. Mother takes a similar approach with her older child.

Is little Margaret fixing round eyes on a daisy she has plucked? In a second, the daisy will be thrown away, and a pebble or a buttercup will charm the little maid. But the mother seizes the happy moment. She makes Margaret see that the daisy is a bright yellow eye with white eyelashes round it; that all the day long it lies there in the grass and looks up at the great sun, never blinking as Margaret would do, but keeping its eye wide open. And that is why it is called daisy, ‘day’s eye,’ because its eye is always looking at the sun which makes the day. And what does Margaret think it does at night, when there is no sun? It does what little boys and girls do; it just shuts up its eye with its white lashes tipped with pink, and goes to sleep till the sun comes again in the morning. By this time the daisy has become interesting to Margaret; she looks at it with big eyes after her mother has finished speaking, and then, very likely, cuddles it up to her breast or gives it a soft little kiss. Thus the mother will contrive ways to invest every object in the child’s world with interest and delight.

This is one of my main motivations for nature journals and art narration at this age. These are activities which help them fix their minds on the object for longer than they would otherwise. Sustaining attention is a worthy goal in education.

So, what exactly is attention?

Attention is hardly even an operation of the mind, but is simply the act by which the whole mental force is applied to the subject in hand.

Charlotte is constantly using words like “force” and “strength” to show that attention in adults is like a muscle. On the other hand, we have our culture, full of ADHD, and whatever the cause, the result is nothing less than weak minded children growing into weak minded adults. I do not say this because I lack compassion but because I am aware of the gravity of this fact. Whenever you reach a critical mass of weak minded people, you have a serious problem, culturally speaking.

Charlotte has a list of ways to encourage attention:

So, we do these things for the children, and eventually they learn for themselves:

As the child gets older, he is taught to bring his own will to bear; to make himself attend in spite of the most inviting suggestions from without. He should be taught to feel a certain triumph in compelling himself to fix his thoughts. Let him know what the real difficulty is, how it is the nature of his mind to be incessantly thinking, but how the thoughts, if left to themselves, will always run off from one thing to another, and that the struggle and the victory required of him is to fix his thoughts upon the task in hand. ‘You have done your duty,’ with a look of sympathy from his mother, is a reward for the child who has made this effort in the strength of his growing will.

In older children who are responsible for their own work, then, Mother still needs to be on the watch, guarding against “mooning” over their work. Make sure that when they are done with their work, they are rewarded with pleasant times.

Some children will require discipline. The natural result of inattention over the entirety of the child’s education is ignorance. Do you see why I take ADHD so seriously?

Lessons From Charlotte: Habits of the Mind