At School with Charlotte: Beginning with Authority

[dropcap]I[/dropcap]t is always interesting to discover Charlotte’s beginnings. If you recall from Volume 1: Home Education: Educating and Training Children Under Nine, we find that the subject of her first chapter was not randomly selected, but rather the most important thing, the collection of ideas which formed the very foundation upon which everything else might rest — she commenced with what she called preliminary considerations. These were the nature of children, of God’s commands in regard to them, and so on. 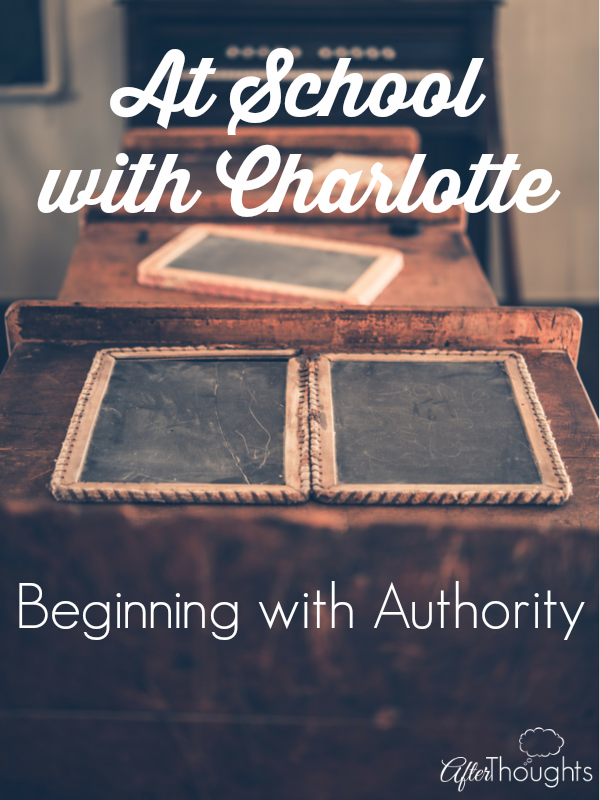 In Volume 3: School Education: Developing a Curriculum, we find that Charlotte begins with two concepts: authority and docility. She equates them to a ball-and-socket joint, two complementary parts that require one another to work. She didn’t offer a clear and concise definition of either word, so I decided to use my handy dandy Webster’s 1828 Dictionary to get me started. Webster sayeth:

Legal power, or a right to command or to act; as the authority of a prince over subjects, and of parents over children. Power; rule; sway.

This fits with Charlotte’s discussion, especially when she notes that true authority is derived not from the individual wielding it, but from the office the individual holds. Likewise, I found Webster helpful here:

Teachableness; readiness to learn; aptness to be taught.

Authority can be wielded over unruly subjects, but it’s a hard life for the one in power. Likewise, docility means that the heart is so ready and willing to learn that the authority must be wielded properly, rather than arbitrarily.

The wielding of authority is given lengthy discussion in Charlotte’s first chapter. She explains that her generation was almost entirely reared by parents exercising an arbitrary authority, and this is not entirely a failure on the part of the previous generation, for they managed to mold many impressive, truly great men. However, she explains that this childrearing approach also resulted in a giant chasm between adults and children.

Charlotte, it seems, wishes there had been more intimacy between parents and children, even while the parents exercised their proper authority.

Charlotte goes on to explain the spirit of the day, where many are being tempted to dispense with authority altogether. {Miss Mason has an amazing power — she looks deep into her subject and identifies cause and effect with facility.} So our friend Charlotte points the finger directly at John Locke — thanks to the TV series LOST

, I will always envision him as a middle-aged bald man who carries knives — who popularized the doctrine of “infallible reason.” Miss Mason explains that Locke actually believed that only the reason of a man with a fully-trained reason and a mind “instructed as to the merits of the particular case” could be deemed infallible, but that the masses took the doctrine and dispensed with the proviso, and the rest is history.

She then traces history, {rightly} blaming Locke for his share of fault in that disaster we refer to as the French Revolution, and so on and so forth.

So why is this important, and what does it have to do with authority, arbitrary or otherwise? Well, let’s take a look at what was happening in Britain in Miss Mason’s day. Herbert Spencer had imported Locke’s philosophy and applied it to education, and Charlotte was trembling in her boots. The Doctrine of Infallible Reason “leads to the dethronement of authority,” says Charlotte.

Well, because of the nature of authority that the British at the time {and I think ourselves today as well} had adopted. It was an arbitrary authority, depending upon the person rather than the office. In regard to parenthood, Charlotte has a few examples of this sort of authority sprinkled throughout her chapter {and more in the second chapter, which further develops this subject}.

Parents and teachers, because their subjects are so docile and so feeble, are tempted more than others to the arbitrary temper, to say — Do thus and thus because I bid you.

If you recall from Home Education, she compared this “because I say so,” to a different approach: “because you ought” and “because this is right.” The situation may result in the same action on the part of the child {obedience}, but rather than being trained to obey what is perceived to be the arbitrary will of the parent, the child is instead introduced to the idea of his obligations and duties. In other words, he is submitting himself to the laws of God and nature.

But “because this is right” was not the reigning rationale in Charlotte’s youth. Once authority was deemed to have an arbitrary nature {and only an arbitrary nature}, it was easily dispensed with … especially when my own reason is deemed infallible. Charlotte calls this “doing right in our own eyes” {quoting the book of Judges}. To some extent, this was an early form of what we think of as postmodernism — there is no authority, and even if I don’t know, who’s to say that you know any better than I do? You have no right {no authority!} to tell me what to do!

So we see that our time and Charlotte’s time suffered from a similar disease.

Why does any of this matter?

Well, let’s return to David Hicks for a moment:

Love is the principle of truth in philosophy and of beauty in art that draws the spirit of man off center to participate imaginatively in the object of beauty or truth … Unlike self-denial or self-negation, love is a positive force, but it requires an object above the self for which the self is transcended. Once the knowledge of this transcendent object is established, whether by reason, by example, or by faith, love binds a person to this object. This binding is the supreme aim of classical education, the union of knowledge and responsibility tantamount to the formation of the virtuous man.

A proper Christian education binds students to the Father in love. Charlotte knew that this was what was at stake in building an educational philosophy on the faulty foundation of Infallible Reason:

[Parents] accept the philosopher’s teaching when he bids them bring up children without authority in order to give them free room for self-development; without perceiving, or perhaps knowing, that it is the labour of the author’s life to eliminate the idea of authority from the universe, that he repudiates the authority of parents because it is a link in the chain which binds the universe to God … When we take up [Spencer’s] volume on education, … we must bear in mind that we have put ourselves under the lead of a philosopher who overlooks nothing, who regards the least important things from the standpoint of their final issue, and who would not have the little child do as he is bid lest he should learn, as a man, to obey that authority, other than himself, which we believe to be Divine. {emphasis mine}

Today, Spencer’s legacy is alive and well. I remember when my oldest was a toddler, the popular parenting magazines were instructing us to never tell our children no and instead redirect them to something else. Charlotte was big on redirection also, and there is nothing wrong with it per se, but my hunch is that those attempting to eliminate “no” from the family vocabulary had aims other than developing the child’s aptitude for future virtue.

Why would Charlotte begin her volume with this debate? For now, I must speculate, having read only a handful of pages past this point. But I can guess. First, she was trying to connect her book to the issues of the day. Second, and perhaps more importantly, she understood that the concept of learning rests on authority. Once we eliminate authority, no one may teach or correct or instruct and, ultimately, there is no knowledge at all, for even knowledge is authoritative. All certainty disappears, and despair sets in {for those who realize all of this, anyhow}.

Charlotte was trying to stop the world from heading down this road. She was protecting the very nature of education.

Have you ever tried to teach a child who is captivated by his own self, his own reason? Who thinks he is infallible and there is nothing he can learn from you? I have. I doubt I am alone. We all know that homeschooling such a child is “impossible.”

So before we can plan the curriculum, we have to correct the authority problem in the child’s life first.

And that, friends, is why Charlotte begins here … because education begins here, too.

Norms and Nobility: The End

At School with Charlotte: How Authority Behaves