Picture study is one of those indispensable elements of a Charlotte Mason education. If you’ve read her works, you know that Charlotte adored art. I don’t know much about art, so I always become keenly aware of my own ignorance when reading those portions of her books. Nevertheless, picture study has become one of the weekly rituals of our home. I have learned to trust Charlotte, incorporating even the practices that I am naturally resistant to, because…well, frankly, she just makes a lot of sense.

Why do Picture Study?

Mason had a number of reasons for beginning picture study with even her youngest of students {meaning age six}. First, she believed that this would increase their interest in the artists’ works. This is akin to John Hodges’ assertion {made in regard to music} that exposure encourages appetite. If you want children to like art {or music}, you have to familiarize them with it.

Second, she believed it was one other way of increasing their power of attention and observation {of course, this might depend upon how you go about it}. In addition to this, at various times she mentioned its value in regard to the ability to make a clear mental picture, increasing the power of imagination, training their ideas of “form and colour,” and even enjoyment and populating the mind with beautiful images to think upon.

This is nothing less than a habit of the mind, and this habit requires a lot of content. Lucky for us, the world is full of beautiful, noble, lovely things to think about. As a child becomes so acquainted with a beautiful picture that it is stored forever in her memory, this is one more image that he can draw up and ponder whenever he might need it.

How is Picture Study Planned?

Ambleside Online assigns six pictures from a single artist per term. These may be line drawings, oil or watercolor paintings, etchings, etcetera. In Volume 6 of Mason’s work, we see that this is exactly what was done in Mason’s own schools. I think that Mason exposed the children to them one at a time, but I have them all printed up on cardstock at once, frame them, and hang them upon a wall in our dining room. When it is picture study day, I bring down that day’s assigned piece.

How is Picture Study Done?

I’ll tell you how Mason described it, and then I’ll tell you what we here on the microhomestead actually do. Here is a quote from Mason’s first volume: 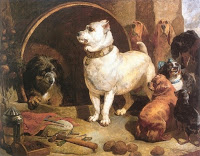 “Step I.––Ask the children if they remember what their last picture-talk was about, and what artist was famous for animal-painting. Tell them Landseer was acquainted with animals when he was quite young: he had dogs for pets, and because he loved them he studied them and their habits––so was able to paint them.

“Step II.––Give them the picture ‘Alexander and the Diogenes’ to look at, and ask them to find out all they can about it themselves, and to think what idea the artist had in his mind, and what idea or ideas he meant his picture to convey to us.

“Step III.––After three or four minutes, take the picture away and see what the children have noticed. Then ask them what the different dogs suggest to them; the strength of the mastiff representing Alexander; the dignity and stateliness of the bloodhounds in his rear; the look of the wise counselor on the face of the setter; the rather contemptuous look of the rough-haired terrier in the tub. Ask the children if they have noticed anything in the picture which shows the time of day: for example, the tools thrown down by the side of the workman’s basket suggesting the mid-day meal; and the bright sunshine on the dogs who cast a shadow on the tub shows it must be somewhere about noon.

“Step IV.––Let them read the title, and tell any facts they know about Alexander and Diogenes; then tell them Alexander was a great conqueror who lived B.C. 356-323, famous for the battles he won against Persia, India, and along the coast of the Mediterranean He was very proud, strong, and boastful. Diogenes was a cynic philosopher. Explain cynic, illustrating by the legend of Alexander and Diogenes; and from it find out which dog represents Alexander and which Diogenes.

“Step V.––Let the children draw the chief lines of the picture, in five minutes, with a pencil and paper.”

There is no talk about schools of painting, little about style; consideration of these matters comes in later life, but the first and most important thing is to know the pictures themselves. As in a worthy book we leave the author to tell his own tale, so do we trust a picture to tell its tale through the medium the artist gave it. In the region of art as elsewhere we shut out the middleman. {emphasis mine}

There is a huge temptation here, as in all areas, to make these things harder than they have to be. Mason simply allowed the child to interact with the picture.

It isn’t that we can “be lazy” and not do all of these activities. It is that these activities come between the child and the object of study. Too many distractions cause him to not know.

In other words, picture study is simple because it is focused. It has one goal: to know the painting.

So here is what we do: Once per week, I take down the assigned picture {each picture gets two weeks}, and we look at it. I tell them the name of the artist and the name of the picture. If the picture is referring to a story, I first read it to them {except when they are already very familiar with it}. This usually takes a short period of time because most paintings, if they reference a story at all, reference a short myth or passage of Scripture. Then, the children crowd around and they take turns telling me what they see. I call this “narrating the painting.” In the past, I had them try and “draw the lines” but there were tears {they were too young, for the most part} so last year, this oral description was all that they gave me. On his exam, my son would describe a painting in the most detail he possibly could without giving us the name, and then we had to guess which one he was talking about.

This year, I plan to have my oldest {age nine} draw the lines. The others can do so if they like, but it will not be required. I like that Charlotte limited the time on this activity to five minutes.

On occasion, I’ve bought a children’s book about a particularly famous artist or painting, but for the most part, we keep it this simple.

Charlotte believed that artistic analysis was appropriate in the older years, not in the younger years. This makes sense to us because Poetic Knowledge already taught us that small children must deal in wholes, and that the wholes must precede analysis by years, not days. When the time for analysis comes, we will find good books to aid us. For now, we stick to very simple, but very regular picture study.

I don’t think a child is ever too young for this activity, as long as our expectations are age-appropriate. Picture study is by far my two-year-old’s favorite time of the week. He literally cheers when I grab a picture off the wall! For him, though, we turn it around. Do you see the woman? The door? The house? The tree? The dog? He points and points and enjoys every minutes of it. We ask him what he sees, and sometimes we understand him, and sometimes we don’t. And then he listens to what the others are saying about the picture.

Because of my poor experience with drawing the lines of the painting, I would say that, unless a child is a natural artist, beginning this before age six or seven might be unwise. But other than that, this is a wonderful way to begin incorporating the elements of a broad and generous education into a lives of our youngest members.