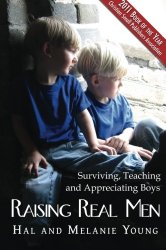 [dropcap]L[/dropcap]ast night, I read a chapter of the book I’m reviewing {Raising Real Men} to Si while he was working out. The first chapter starts with a little boy, who is disappointed because while his big brothers and father are climbing a waterfall, he’s staying behind with Mom and the little girls. Here is Mom’s response:

She looked around for a climb that would allow her to compromise, to allow him to exert his growing manhood without taking too big a risk.

She finds one, of course; a little hill he can conquer on his own. He is ecstatic.

Soon after, the book tells me:

It may not seem important to let your little ones take reasonable risks, but it is part of a principled attitude toward raising our boys to be real men, godly men, warriors for Christ.

More than once, I’ve wondered where these wimpy, effeminate guys behind the counter at Starbucks come from. Oh, I don’t mean that every guy has to be That Guy. {You know the one, right? The man with the machismo, or maybe the Texas cowboy type.} I couldn’t think of how to describe it exactly, but this first chapter had words for that, too:

But what about the dirt? Why do boys love dirt? And blood and guts and worms and insects? Because one day he might be waist-deep in a swamp, pulling your family out of a wrecked automobile. Or splattered with arterial blood while pioneering a new surgical procedure. Or eating roasted grub worms with the natives to earn their permission to share the Gospel. It might not be our cup o’ tea, any of them,. but would you rather have men able to overlook things like that for the higher business at hand–or would you prefer fastidious pseudo-men who are only good to wait for someone else to take care of it? {emphasis mine}

I found all of this very interesting, because we just finished up reading Men of Iron.

Myles Falworth doesn’t realize until close to the end of his training {from squire to knight} that he is being carefully raised up for a purpose. He initially thought that he was simply being given the best possible start in his career as knight errant, something he would need in light of his father’s fall from the king’s favor. His family having plummeted into poverty and forfeited all their lands and riches to the throne, Myles needs all the help he can get.

But it turns out that the Earl of Mackworth {under whose care he resided for many years of his youth} was not giving him a “good start.” Myles was being carefully groomed to perform a very special task, the effects of which would ripple throughout the kingdom.

He was to challenge the Earl of Alban to a trial by combat.

This requires many details to fall into place, which I won’t go into at this time. All of this is the just the context for two connected passages I’ve been pondering for a few days now, both of which tie neatly into the above point:

So Myles went to France in Lord George’s company, a soldier of fortune… He was there for only six months, but those six months wrought a great change in his life. In the fierce factional battles that raged around the walls of Paris; in the evil life which he saw at the Burgundian court in Paris itself after the truce — a court brilliant and wicked, witty and cruel — the wonderful liquor of youth had evaporated rapidly, and his character had crystallized as rapidly into the hardness of manhood. The warfare, the blood, the evil pleasure which he had seen had been a fiery, crucible test to his soul, and I love my hero that he should have come forth from it so well. He was no longer the innocent Sir Galahad who had walked in pure white up the Long Hall to be knighted by the King, but his soul was of that grim, sterling, rugged sort that looked out calmly from his gray eyes upon the wickedness and debauchery around him, and loved it not.

The Earl of Mackworth stroked his bear softly. “Thou art marvellous changed,” said he. “I would not have thought it possible.”

Myles smiled somewhat grimly. “I have seen such things, my Lord, in France and in Paris,” said he, quietly, “as, mayhap, may make a lad a man before his time.”

“From which I gather,” said the Earl, “that many adventures have befallen thee. Methought thou wouldst find troublesome times in the Dauphin’s camp, else I would not have sent thee to France.”

What does this have to do with the quote from Raising Real Men?

Well, did you notice that in both instances, a youth was directed toward manhood through putting him in a position of risk? In both situations, the possibility of danger-as-tutor was considered and used.

I’m not one to say we need go back to the wild dangers of knight-errantry. I do not pretend to understand the extremes of that time in regard to hazarding a man’s life. But I do think that something has been lost over time, until we have reached the point of today, where we coddle and protect boys, smothering their natural instincts, and telling them that the most important thing they can do in this world is to Be Careful.

I don’t pretend to know much about raising boys. Generally, I feel more competent with girls. But I do know that Being Careful is not the path to forging heroes.

Not even normal, everyday heroes.