I was so excited when I found out that I was going to be able to review The Gospel Story Bible. I’ve now read The Jesus Storybook Bible and The Big Picture Story Bible countless times to my four little people, and I was looking forward to adding this to our collection of good, quality children’s Bibles.

So, what’s the verdict? 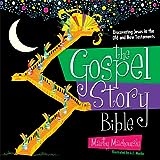 Quite frankly, I wish the illustrations were different. I’m not sure what this style of illustrating is called, but I am not in love with it. Some of it looks like something my preschoolers would do, though admittedly with better proportions. On a number of pages, my girls have been mystified: “What’s that supposed to be?” Truly, it is not to my taste, and I can’t figure out if it’s me or them. Do I have bad taste? Or is the art just bad? I don’t feel like I yet have enough aesthetic training under my belt to judge properly.

I do wish sometimes they would bring back the old Bibles illustrated with fine art. As a child, I was amazed by those. Cartoons just don’t lend themselves to awe and reverence in like manner.

With that said, I appreciate the content of this Bible. It definitely seeks to be covenantal, reminding readers of how this or that in the Old Testament points to Jesus. It does this without being annoying. It also tries to help children make some connections that are only available in the original languages. For example:

Did you know that the word God used for Moses’ basket is the same word that is used for Noah’s great boat, the ark? Just like God used the ark to save Noah, God used the little basket to save Moses. God protected baby Moses from Pharaoh’s order because God planned to used him to rescue his people from their slavery in Egypt. Many years later, God protected baby Jesus from another evil king. King Herod tried to kill him, but God warned Joseph in a dream to go to a place of safety. Jesus, like Moses, grew up to rescue God’s people from slavery. But it was a different kind of slavery–a slavery to sin.

I did find myself asking if the author was making too many connections for the children. As you know, my educational philosophy rests partly upon the assumption that children are created to learn and remember best the connections they made for themselves. There is a sense in which education takes place mostly in that space between confusion, wondering, and the aha moment.

I’m not sure if this book gives enough room for a child’s own aha moments. 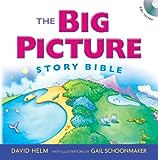 I’m comparing this mainly to The Big Picture Story Bible and The Jesus Storybook Bible, both of which are, in my opinion, more spacious…meaning they are also less obvious. The former, being written to ages 2 and up, mainly focuses on repetition, allowing children to make the connections along the way as they are able. So we see constant allusions to God having a rescue plan and keeping His promises. This is repeated {artfully, by the way} when Noah builds the ark and when Joseph works for Pharaoh during the famine and when Moses delivers the people from Egypt and on and on. When you get to Jesus, you realize that all of these little deliverances and promises kept are pointing you the Big Deliverance and Promise Kept.

The Jesus Storybook Bible is a little more direct, but never completely specific.  For instance, when Moses leads the people out of Egypt, it says:

The difference is subtle, but important. Being too obvious kills the wonder. Leaving a little of it to mystery and imagination is the key. In my opinion, this Bible fills the spaces a little too much. It is probably symptomatic of how we respect children too little, and fail to realize they are willing and able to ponder the mysteries of Scripture and then be delighted when one comes into the light and they grasp its beauty.

But I like it. I did say that, right? We’re using it with our children {Si is reading through it in the evenings once or twice per week}. It is definitely a step up in maturity from the other two Bibles I mentioned, which is great since our oldest is almost 10 now. But I have to admit that I was hoping for something just as perfectly magical and mysterious as the other two children’s Bibles, and this is, in some senses, an almost.

It is funny to me that something can be an almost because it said too much, rather than too little. Perhaps I should take that to heart in my own writing!
________________________________
Final Note:
The Gospel Story Bible was given to me free of charge by The B&B Media Group in exchange for a frank and unbiased review.

Because Philosophy is Where We Start

AO with the Less Academic Child