[dropcap]T[/dropcap]he Master-Maid is a fairy tale from Andrew Lang’s Blue Fairy Book, assigned in AmblesideOnline Year 1. Unlike many of the other stories in this volume, I had never heard this story before when I read it to my oldest child a number of years ago. I wouldn’t consider it one of the best fairy tales because there is a little too much going on. It’s almost as if the writer took two separate fairy tales — one about a prince working for a giant and then escaping with a beautiful lady, another about a lady whose prince is stolen from her, and how she reminds him of herself — and smooshed them together.

Smooshed is a word, right?

Nevertheless, it is one of those tales that reflects small parts of the story of our faith, and I always get so excited when I find these hints nestled inside the old stories. 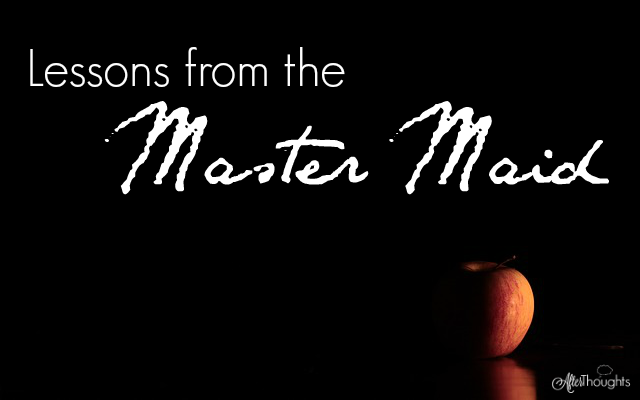 Today, we read the second half. The Prince tells the Master-Maid that it would be bad form for him to bring her to his father’s house on foot. He will return to the King’s palace, get the horses, and come for her, that he might present her to his family in a royal fashion.

She begs him not to leave her. You will forget me if you go! Because he will not yield, she makes him promise that he will not have anything to do with anyone or anything other than the horses when he arrives at the palace. He must keep his mind on his mission. Do not greet anyone. Do not eat or drink anything. They will gather around you, because they have missed you, but you must pretend they are not there.

He gives his word, and then he makes a valiant effort. When he arrives, people are everywhere preparing for the wedding of the Prince’s brother. They crowd around him. They want to know where he has been, what he has been doing. When he ignores them, and continues to prepare the horses, they bring him fine food from the wedding feast. You must be hungry after your journey.

Still, he stays the course.

And then it happens.

Well, if you will not eat anything, you might as well take a bit of this.

And an apple is rolled (by the bride’s sister, incidentally) his way across the grass.

In that moment, he forgets his promise.

He takes, and he eats.

And then he really forgets, for suddenly he has no recollection of why he is saddling the horses and puts them back. The Master-Maid waits for him for a long time before she finally gives up on him and tries another course.

The first time through, I didn’t catch it, but this time I did.

That apple, rolled across the grass? It’s rolled by a troll-witch, though the Prince doesn’t recognize her as such.

The Prince, you see, is a reflection of Adam.

Oh, I’m not saying Adam forgot. I’m just saying the Prince’s downfall was a result of a simple piece of fruit. Don’t think for one minute the author randomly chose an apple.

I asked my little scholar who else in history ate a piece of fruit and paid a price, but she didn’t want to discuss it. She wanted to know what happened to the Master-Maid.

And who can blame her? Isn’t that really what we want when we read about Adam? Gosh, he ate the fruit. Now what happens? Is there any hope?

For a long time in the story, it really does look hopeless. The Master-Maid settles herself quietly in a little hut in the woods near the palace. She has a variety of suitors who visit her, none of whom are the Prince. The Prince is engaged to the troll-witch (he still is blind to her true identity). We begin to think that all really is lost. Will the Master-Maid remain forever hidden away in the woods? Will the Prince marry a troll-witch?

Will one piece of fruit really change history forever?

It is not until the very last moment that the day is saved. A series of strange happenings lead to the Master-Maid being seated in the place of honor beside the Prince at his wedding banquet, because the King believed she was more than she appeared. She makes a simple comment at the table, and the effect is as if scales fell from the Prince’s eyes.

He remembers who he is, who she is, who he ought to be marrying. And he finally recognizes that he has been tricked.

The troll-witch is torn to pieces by horses, and the couple is finally united. All is set right in the world.

And we’re left remembering that this is how it is in our world, too. One day, all will be set right. One day we will not forget, nor will we be forgotten, and the Wedding Feast will be in perfect order.