[dropcap]A[/dropcap] while back, a friend of mine pointed out the above verse in Genesis and mentioned that she was “trying this” on her children. She explained her reasoning, and I thought: What have I got to lose? On the one hand, I could possibly have some good conversations with my children. On the other hand, it could prove a fruitless endeavor.

I’ve had my share of fruitless endeavors, and I’m no not much worse for the wear. 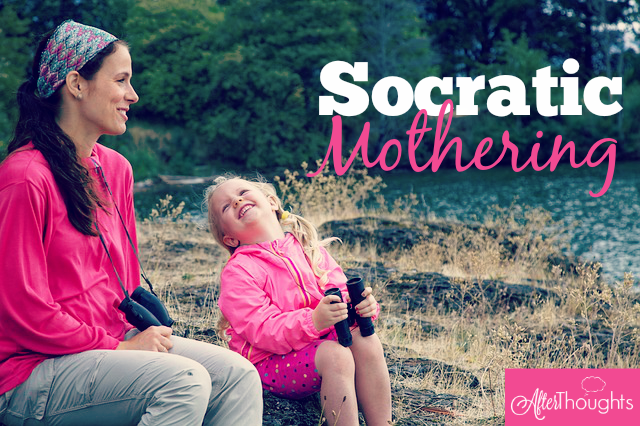 So I’ve been trying this, too. After all, God was facing the first sin, and His response was to engage His people in conversation. The Bible doesn’t set this up as the Most Ultimate Magic Mothering Trick Ever, but it also doesn’t say Thou Shalt Not Do This.

Tt went pretty well, so I did it again.

It’s been so interesting, almost like an intellectual exercise, and now I kick myself whenever I don’t remember to do this.

Let’s give an example. Son A {hypothetical child} does something Really Stupid and Also Previously Forbidden. Instead of jumping on his case {my usual wisdom cough} I get to play with his head a little. So: “Have you just done the Stupid Thing Previously Forbidden?”

Along with Blaming, which is interesting, because that is what his father Adam did as well.

I’m not saying I’d do this with a two-year-old. With toddlers, I don’t get into mind games. They are too smart for me. But I can’t help but think that this was what made Socrates so effective.

Then again, he died a tragic death, so the jury is still out on what will happen here. Consider yourselves warned.

Oh, the Things I Think I Know

1. Ourselves 2. The Social Skills Guidebook 3. Nutrition and Physical Degeneration 4. What Jane Austen Ate and Charles Dickens Knew 5. Waverly 6. The Complete Father Brown Stories 7. The Lion and the Saint 8. Summer of Monkeys 9. The Ruins of Gorlan 10. The Boy Who Harnessed the Wind 11. The Burning Bridge 12. Northanger Abbey 13. The Icebound Land 14. The Lost Baron 15. The Baronet's Song 16. The Sea-Hawk 17. The Shepherd's Castle 18. Harry Potter and the Half-Blood Prince 19. The Boat Who Wouldn't Float 20. The Giver 21. Gathering Blue 22. Natural Born Heroes 23. Messenger

Um NO. 🤢 My daughter told me she needed new je

New episode out today and OH MY wasn't this one to

Prepping to speak at the @scholesisters online loc

"The art of the hero wasn't about being brave; it