[dropcap]L[/dropcap]et’s talk about math, at least for a little while. If you have been reading here over the years, then you know that there came a time with E-Age-10 that we needed to take a break from math*. This lasted about six months, I think. The funny thing is, he has slowly caught up. Whereas last year when he began the school year, he was still about four months behind, he went so quickly during the year that this year he only had five weeks of fourth-grade math left to do. This means he has already commenced with fifth grade math. 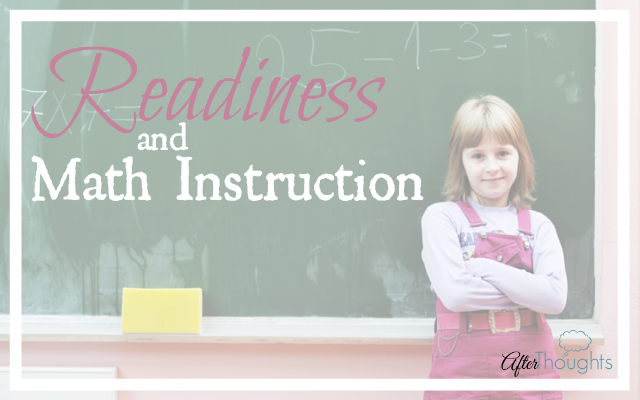 Putting him right at grade level.

I hate the idea of “grade level” because I think that, for the most part, children are where they are. So the same mothers that worry because their friend’s baby walked at 10-months, but their baby didn’t walk until 16-months are worried if their third grade child is doing “second grade” math.

I used to be this person, by the way.

But I’ve calmed down over the years because I see that not only did my child benefit in real ways from a math break, but he also caught up, all on his own, without either of us ever trying to do so!

Some of you may know that there is a whole subsection of homeschoolers who believe that you do not need to start formal math until age 10, and then they can be “caught up” {as in: prepared for higher math like algebra and geometry} in only two years.

I do not go to this extreme, but I am learning that teaching math is sort of like teaching a child to tie their shoelaces. You can labor with them, day after day, often in tears, when they are three … or you can wait until they are six or seven and teach them in a day. Similarly, when a child is ready for math, they just do it. When they are neurologically capable of thinking in a mathematical way**, it is a delight to them {for the most part — never underestimate the fallen nature, of course}.

Last year, very early in the year, we hit a roadblock with math. A-Then-Age-Six did well in the beginning, but she quickly became befuddled. She didn’t have an attitude problem, and she was more than willing to “do math” every day, but the more we talked and worked and played and talked some more, the more it became apparent to me that she was in no way learning to think mathematically. She was simply learning to do tricks.

That, in my opinion, is not education.

So we dropped my beloved Math Mammoth and spent some time with Ray’s Arithmetic, which means we basically spent a year in daily brief talks about numbers and doing lots of mental math.

So here we are in Year Two, and I brought my First Grade Math Mammoth sheets back out.

Last year it took us fifteen or twenty minutes to get through half of a sheet. And lots of times I felt like I was carrying her through the assignment, which concerned me greatly. I think that if a child is thinking properly about numbers, they can actually be very independent in mathematics.

Today, I brought out a sheet {first time this year as I spent the first five weeks reviewing what we did last year} and we talked about the first portion. Then, E-Age-Ten entered to inform me he had a narration, so I told A-Age-Seven to just do what I had taught her if she could and I’d get back to her. She did the entire section! She also “accidentally” started the second half, doing it properly. I suddenly realized that last year was such a pain because her brain simply was. not. ready.

And this year? Well, she did two sheets because, as one was so much fun, why not two?

And I think the whole thing took only ten minutes.

I wonder how many children it will take before I am completely comfortable adjusting math to where my child is. I wonder how much better last year would have been if I had completely cut math in favor of logic puzzles like I did E-Age-Ten when he was small? I resisted that because it seemed silly to “cut” math before we had ever really begun, but now that I’m seeing what a difference a year makes, I’m very tempted to take it slow on math.

Except for Q-Age-Five, who is already able to do addition and subtraction when she wishes.

These children always keep me on my toes.

*You also have to deal with me needing to learn the same lesson over and over, it seems.
**GAPS is also helping — she has taken leaps and bounds in all parts of her schooling.

Books Read in July and August