[dropcap]L[/dropcap]ately, I’ve noticed that there is a bit of confusion over Charlotte Mason’s disdain for unit studies. I’ve encountered some folks who say, “What’s wrong with unit studies? That’s what I do and I love it!” But then they tell me what they do, and it’s not exactly what Mason was talking about. 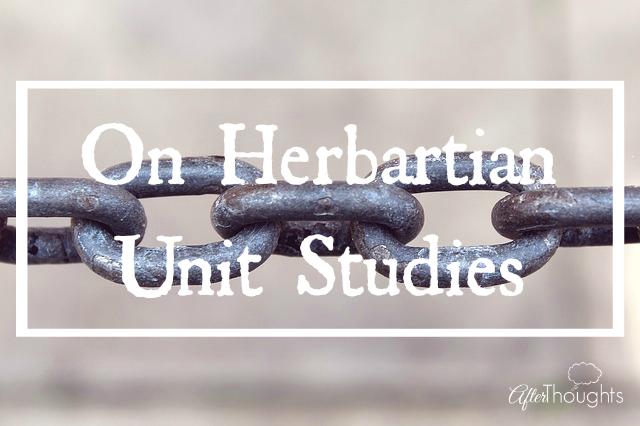 For example, I met a gal who explained that she and her children would go to the library and check out a stack of books on whatever subject they were interested in. Isn’t this what an adult would do? If I really wanted to know about, or simply had my mind on, a topic, I’d read a number of books on that topic, right?

Well … that may be a type of unit study. I can certainly see why someone would do something like that. In fact, it sounds like it has the making of what Mortimer Adler called syntopical reading.

But this is not what our friend Charlotte was so adamantly against. She was against the unit studies in her day that were based upon the work of the philosopher Herbart.

So let’s look at what this is all about.

As a disclaimer, I must confess that I have not read Herbart. I have only read what Mason says about Herbart. So when I summarize Herbart, I am actually summarizing Mason’s summary of Herbart.

Okay, so Mason explains in one or two of her volumes that she actually agrees with Herbart in some places–much more so than, say, Froebel and his invention of kindergarten. But where she differs with Herbart has huge practical implications.

So, briefly, in Herbart’s philosophy:

Charlotte’s criticisms of this are many. If you are familiar with her writings, then you know that she believes — and this falls into line with the thinking of traditional teachers, from Socrates on down — that the learner is responsible for his own learning. Remember, Charlotte often utilizes a food analogy — we set a varied and nutritious banquet, full of the best ideas of mankind, flavored with highly literary works, and so on. And we teach them to eat. We set the example of love. But we do not force feed, and we do not predigest the food for them.

Charlotte gives a very thorough explanation in her sixth volume:

A successful and able modern educationalist gives us a valuable introduction to Herbartian Principles, and, by way of example, “A Robinson Crusoe Concentration Scheme,” a series of lessons given to children in Standard I in an Elementary School. First we have nine lessons in literature and language, the subjects being such as ‘Robinson climbs a hill and finds he is on an island.’ Then, ten object lessons of which the first is, — The Sea, the second, A Ship from Foreign Parts, the sixth, A Life-Boat, the seventh, Shell-Fish, the tenth, A Cave. How these ‘objects’ are to be produced one does not see. The third series are drawing lessons, probably as many, a boat, a ship, an oar, an anchor and so on. Then follows a series on manual training, still built upon ‘Robinson’; the first, a model of the seashore; then models of Robinson’s island, of Robinson’s house, and Robinson’s pottery. The next course consists of reading, an infinite number of lessons, — ‘passages from The Child’s Robinson Crusoe and from a general reader on the matters discussed in object lessons.’ Then follows a series of writing lessons, “simple compositions on the subject of the lessons. … the children framed the sentences which the teacher wrote on the blackboard and the class copied afterwards.” Here is one composition, — “Robinson spent his first night in a tree. In the morning he was hungry but he saw nothing round him but grass and trees without fruit. On the sea-shore he found some shell-fish which he ate.” Compare this with the voluminous output of children of six or seven working on the P.U.S. scheme upon any subject that they know; with, indeed, the pages they will dictate after a single reading of a chapter of Robinson Crusoe, not a ‘child’s edition.’

Arithmetic follows with, no doubt, as many lessons, many mental examples and simple problems dealt with Robinson”; the eighth and last course was in singing and recitation, — ‘I am monarch of all I survey,’ etc. “The lessons lasted about forty-five minutes each.

. . . Under ordinary conditions the story of ‘Robinson Crusoe’ would be the leading feature in the work of a whole year … in comparing the English classes with the German classes I have seen studying ‘Robinson Crusoe’ I was convinced that the eagerness and interest was as keen among the children here as in the German schools .”

Basically, the class is going to view everything they learn the entire year through the lens of Robinson Crusoe. These days, I doubt many are studying a single book for an entire year, especially in the sense of organizing the entire year’s lessons around said book. But still, unit studies are alive and well. Konos, for instance, organizes units around character qualities, while

Five in a Row* has shorter units, focused on reading one book every day for five days. Each day, the book is used to illustrate a different subject {five subjects, one for each day of the week: social studies, language arts, art, applied math, and science}.

Why Did Charlotte Have a Problem with Unit Studies?

At this point, I must say that we need to first go back and understand that the idea of unit studies was born of Herbart. It is very easy to look at unit studies today, and simply appreciate them for what they are. I can almost guarantee you that most of the Christian authors who write unit studies for homeschoolers never, ever read or heard of Herbart.

This is because Herbart took hold. He became cool. If you go to teacher college in this country, chances are that you will be required to write a number of unit studies before you graduate, and the better you are at it, the better your future in the classroom seems it will be.

In my reading of Charlotte, though, I’ve never read her objecting to this approach in the way that I do, so I thought I’d share my own opinions.

First, I get concerned because this is not the way a good reader approaches a book. I do not read, for instance, a book by Jane Austen in order to learn the geography of England, or to do a math problem about how if Mrs. Bennett has five daughters and marries off two of them, then how many does she have left? I’m not saying that, in reading a book, one never asks questions of geography or math. It does happen. What I am saying is that these are not natural questions to ask of the text, nor are they the most important questions to ask of the text. If this is how children are reared to view books, as objects to dissect the life out of, they will never learn great ideas from books — it is a being-too-distracted-by-the-trees-to-see-the-forest sort of situation. In other words, they will never be great readers, and Mortimer Adler will be forced to roll over in his grave. Chances are, they’ll never be able to formulate plots enough to write a great book, either, as they will fail to understand the nature of a book.

Second, and I already alluded to it, this is not the path to comprehension of a book’s greatest ideas. I haven’t read Robinson Crusoe*, but last year I fell in love with Captains Courageous when I read it for the first time.

It could be dissected in much the same way. Someone could take the book and use it as a jumping-off point to discuss fishing in general, bait, tackle, ship construction and maintenance, sailing, weather, current, water safety, and so on and so forth. But the book is about redemption and becoming a man, and if you don’t read it this way, you miss the point. Is it an allusion to baptism, when Harvey falls into the water and nearly drowns? And is it Messianic, when he is pulled out, rescued, and then “discipled” in true manhood? A million rich conversations could pour forth from thinking the noble thoughts of the book, but unit studies a la Herbart tend to dwell on the minutia. All books have their interesting details, but the great thoughts — the Permanent Things — presented, transcend those details.

In fact, many books written don’t make the cut and aren’t worthy of being preserved for generations because the author was too locked in the details of his own time; he failed to transcend and speak about the Permanent Things.

And So it Goes

My motivation here in writing this was not to convince folks who love unit studies to stop, nor to cause those who don’t to feel smug. I really hate fighting about methods. But I’ve found lately that there is a lot of confusion as to why Charlotte objected to unit studies, so I hope that this helps us understand the nature of her concerns. Whenever we adopt or reject methods or philosophies, we ought to be aware of their historical background and reason for being, rather than just being enamored with the method itself.

*I read Robinson Crusoe later in 2011. It is a story of selfishness, sin, tragedy-as-redemption, and repentance, much like Captains Courageous.

You Know You’re on the GAPS Diet When…