[dropcap]I[/dropcap] think I mentioned before that I added in Signs and Seasons: Understanding the Elements of Classical Astronomy for Circle Time this year. It was basically love at first sight over here. Like many other books I read, I’m having Charlotte Mason sightings everywhere. Now, I’m using this with very young children–my oldest child is only 10–so we are going very slowly. I’m reading one section at a time {and only once or twice per week}, and then my 7-year-old and 10-year-old are asked to narrate. We’ve finally gotten to the point where it makes sense to go outside and apply our knowledge, which makes it especially fun for the 5- and 4-year-olds. They love anything hands-on, which is typical for that age.

There is a field journal for use with older children that we are not doing because we are so young.

Why We Study Astronomy

I always like to have an apologetic. Anytime we’re adding to our schedule, there better be a good reason. It is my policy that we do not do busy work. We are called to make the most of our time. I added astronomy based upon a gut instinct, but after that I was watching for a real reason. I found one in Signs and Seasons: 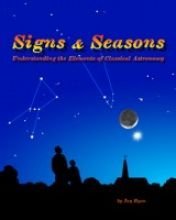 All of our modern methods of timekeeping have their origins in the cycles of the heavenly bodies. Time has always been reckoned by changes in the periods of light and dark, variations of the Sun and moon int he sky above.

And God said, Let there be lights in the firmament of the heaven, to divide the day from the night: and let them be for signs and for seasons, and for days and years. –Genesis 1:14

My mind was blown away. How many times have I read that verse, and yet never sought to know the sky in terms of its God-designed purpose? Oh, I have always known that the sun gives light, and the light helps plants grow and the earth keep warm and even my own skin make vitamins it needs to live. I understand that type of design, and I appreciate it. But I have never tried to know the sun and moon and stars for their primary purpose of … time keeping.

Charlotte Mason suggested practicing basic sky-watching from the youngest of ages. In her first volume, for instance:

The Position of the Sun. — And not only this: the children should be taught to observe the position of the sun in the heavens from hour to hour, and by his position, to tell the time of day. Of course they will want to known why the sun is such an indefatigable traveller, and thereby hangs a wonderful tale, which they may as well learn in the ‘age of faith,’ of the relative sizes of sun and earth, and of the nature and movements of the latter.

Recently, my children started noticing that old books mention that even little children know what time it is by looking at the sun. Laura Ingalls knew it when she was just a tiny thing, and Ralph Moody mentions in a number of times in his stories as well. It’s also mentioned in various books we’re reading through right now, such as Carry On, Mr. Bowditch. They all — but especially the oldest — began harassing me about the sun. Why do all the children in old books know something and that they don’t know? “How is that even possible?” my oldest asked.

I didn’t mention to him that if I’d been taking all of Charlotte Mason’s advice he would likely have known such a thing before he was school age.

Thankfully, Signs and Seasons is slowly taking care of this. {We really need to figure out how to make a sundial, something I have been putting off.}

At one time, everyone knew how to “read” the sky. People could roughly tell the time of day just by knowing the Sun’s position in the sky. When you live close to the land, you just know what time it is. Maybe not to the exact minute, but close enough!

The Sun is very bright, much too bright to look at. But we can look at the shadows of objects that block the Sun’s bright light. We can know the Sun’s position in the sky just by looking at the direction of the shadows on the ground. A lot of astronomy involves shadows, as we will see.

Miss Mason goes on in Volume 1 to cover measuring distance {in paces}, and then moving from distance to direction and from general direction to knowing the compass points:

East and West. — Of course the first two ideas are that the sun rises in the east and sets in the west; from this fact he will be able to tell the direction in which the places near his own home, or the streets of his own town, lie. Bid him stand so that his right is towards the east where the sun rises, and his left towards the west where the sun sets. Then he is looking towards the north and his back is towards the south. All the houses, streets and towns on his right hand are to the east of him, those on the left are to the west. The places he must walk straight forward to reach are north of him, and the places behind him are to the south. If he is in a place new to him where he has never seen the sun rise or set and wants to know in what direction a certain road runs, he must notice in what direction his own shadow falls at twelve o’clock, because at noon the shadows of all objects fall towards the north. Then if he face the north, he has, as before, the south behind him, the east on his right hand, the west on his left; or if he face the sun at noon, he faces south.

It has been many years since I have read through Volume 1 in its entirety. I remember that during my very first reading, my eyes glazed over during this portion. My brain simply could not take it in, and that is hard to admit because in rereading it today, it all sounds so simple.

It is rare to go outside, toting Volume 1 and giving lessons. I’m sure someone, somewhere has done it, but I have always taken what I remembered and taught from that. Unfortunately, this is a portion I forgot…until we got to this week’s first lesson from Signs and Seasons:

If you can follow the movements of the Sun, you can find your directions just as easily as people did in ancient times.

After observing the quarter in which the sun rises on any given day, at the middle of the day take your position in such a manner as to have the point of the sun’s rising on your left; you will then have the south directly facing you, and the north at your back. –Pliny the Elder {circa A.D. 70}

It was quite cloudy when we read this, so we have our “lab time” slated for high noon today.

By the time Miss Mason’s students were in Form III, they were expected to answer questions such as:

“How would you find the Pole Star? Mention six other stars and say in what constellations they occur.”

Eventually, Signs and Seasons will get us there, but we’re taking it one step at a time, and I assume we’re many months out from learning something like that.

I suppose this post is something of a review, though I didn’t begin it with that intention. I just wanted to share a resource. When I read Charlotte Mason, I see her teaching some things that {1} are not yet {yet — I think we all know that science has been being improved and refined over the last few years} scheduled somewhere in the AmblesideOnline curriculum and {2} I need a book to help me accomplish. I know next to nothing about classical astronomy, and I always need a book or other resource when I am teaching up the hill of a giant learning curve, which is basically what this is.

I can see how a high schooler or junior higher could move much more quickly through the text, reading a section per day instead of a section once or twice a week, and adding in the journal and lots of practice. However, Miss Mason was doing at least some of this at much earlier ages, and the book is so interesting that I’m not afraid to work through it to the end … and then begin again once we’re done. After all, I doubt that my littles will remember all that we’re covering, though I don’t underestimate the impact of having the entire family — their environment — becoming more infused with astronomy.

We are up with the sunrise every single day. You can’t see it very well from the milking shed, but it’s there. A-Age-Seven is outside as the sun is coming up about 80% of the time. And yet this child was shocked to learn about sunrises in Signs and Seasons. She was doubly shocked to learn that the sun moves through the day. This child has watched hundreds of sunsets with her dad {who is an avid fan and our yard happens to have a decent western view} and yet it never connected in her brain that the sun was moving. All of this is to say that going through these lessons has brought things to the attention of every age. It isn’t what an older student would gain, but it is a gain nonetheless, and as she and the others make these gains, I think they are becoming more observant of the sky in general, which I count as a very positive thing.

So. If you’re looking to add a little astronomy into your day, I cannot recommend Signs and Seasons enough. It it thoroughly Christian, it is a delight to read {there are some well-crafted sentences that you wouldn’t normally find in a “textbook”}, and it’s going to teach some things that Miss Mason expected children to know, and yet most of us {especially me} do not have the knowledge required to teach it on our own.

Anyone else using Signs and Seasons? How do you like it?

Ideals: Loving Knowledge for its Own Sake