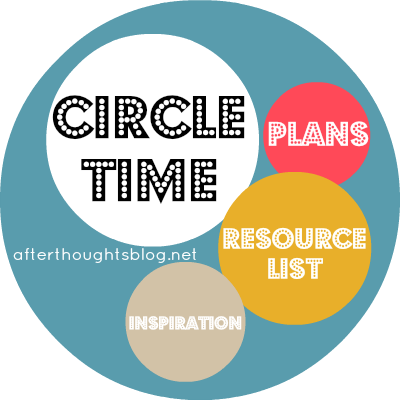 I was supposed to be back in business last week, but my computer was broken and my ten-year-old’s laptop refused to cooperate, so I’m a week late and a dollar short. Actually, after paying to repair the computer and the Suburban, and knowing I have to buy tires for said Suburban next week, I think I’m more like a thousand dollars short, but who’s counting?

I certainly don’t intend to count that high.

Below are my Circle Time plans for this term, and below that will be all the resources I’m using. This coming week will actually be Week 4 of the term for us because we continued with our regular lessons during DecemberTerm this year. I didn’t used to do that, but now that we are older, and I have more students, it seems to be a necessity.

Making hay while the sun shines and all that.

I find that Circle Time is still a favorite time of the day and I think I intend to expand it as my children grow older. Already I see a huge difference between this year and last year, and I am thrilled with it. We’re beginning to have real discussions, not just between myself and one other child, but between the children themselves.

So here are the plans.

Yes, I was in a beach mood today. I ate fish and chips last night for dinner, and I’m pretty sure that is what started it. If I could have taken off to Avila for the day today, believe me: I would have!

Here are the Renoir selections: portrait and landscape. I usually email these to a print shop and have them printed on cardstock. I frame them and they hang on the wall in the dining room {which is where we do Circle Time} for the term. On the scheduled day of study, I take down the assigned selection so we can see it better. I love having the selections up on the wall.

Notes on Changes and Tinkerings

Let’s see. What else is there to say? Oh! Our Bible reading time felt too long. What I mean is, I was losing the children’s attention, and if there is one goal I have, it is have them like {and not hate} our Bible reading time. I looked up the old PNEU schedules and discovered that the schools were alternating Old Testament with New Testament, rather than reading both daily, so I thought I’d try that last term. It worked wonderfully, and the children are back to looking forward to this time.

I have also added a lot more memory work than usual. There is a good chance this is too much, but we’re going to try it. You may notice that the parable I assigned is the same one from Term 1. This is because we never got to it. That is reality. When it comes to memory work, I would rather overplan than underplan because if I underplan I end up scrambling for new selections in the middle of the term, which I despise doing. If I overplan, I have all sorts of fun stuff in my binder, and then I have less to think up the following term.

I do not start all of these selections at once. I usually get one spoken thing, and two songs, started in the first week, and then we work up from there. Too much newness is overwhelming for us.

With that said, I read up on what Miss Mason’s first graders were memorizing and decided we were not doing close to that. One of the schedules assigned six verses from Exodus 3 for first through third graders, plus many other things, so I added that on top of what we were already doing. Other than Psalms, we had not done any Old Testament memorization.

I also added a government documents section, which is something I’ve always wanted to do. We’re starting with the Bill of Rights because there has been so much debate about the Second Amendment lately that my ten-year-old suddenly asked me, “What are the other Amendments?” and I thought the best answer to that was, “You’ll find out during Circle Time starting next week!”

Now please don’t think we are tackling the entire Bill of Rights at once. We will start with the First Amendment. Once we know that pretty well, we’ll start learning the Second Amendment. And so on and so forth. I figure it will take us a year or two, but we’ve got time. Maybe they will surprise me and do it faster. Either way, I only printed off the first two Amendments, so that tells you what I am expecting for the term.

If you’ve posted your Circle Time plans, be sure and link them in the comments. I love stealing getting ideas from you all.

Why Latin? An Amateur Apology.