Because I became totally obsessed with the gun issue for a couple weeks there, I almost forgot to share the cake photos from when Q-Age-Five became Q-Age-Six. She is a New Year’s Eve baby, if you recall. 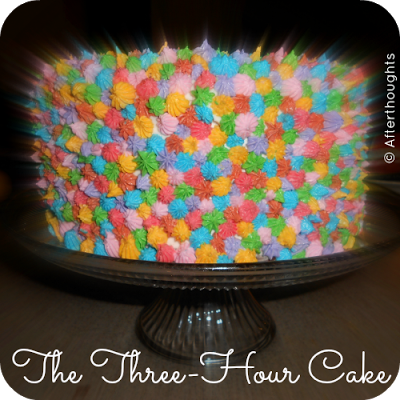 This is the first time I’ve chosen a cake directly from Pinterest. Usually, I search around on the web and pin things to Pinterest so that the birthday child can pick from a selection of cakes I think I can actually make. But this time I searched on Pinterest, repinned, and there you are. Talk about a time saver!

Q-Age-Six had requested a butterfly cake, but for some reason a photo similar to the ones you see here also turned up. I’m so glad, for I wasn’t really relishing the chance to make my 87th butterfly cake, despite how pretty they may be. I try to make something new each time, and I was coming to the end of butterfly options.

I call this The Three-Hour Cake because that is how long it took me–along with my husband–to decorate this cake.

I didn’t actually read directions for this cake, but instead tried to duplicate what I saw in the original photo. The cake underneath is a sourdough chocolate cake that came out a little heavy. Oh well. It is three layers. As a general rule, I choose the number of layers in a cake based upon how many guests we’re expecting rather than what the cake ends up looking like. 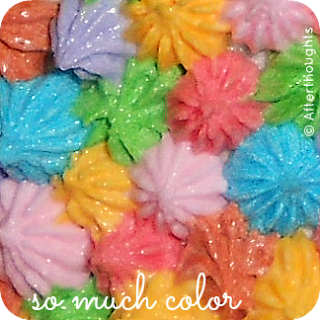 I made a triple batch of frosting. While it was still white, I stacked the cakes {using frosting as the fill} and also did a crumb coat {which you can see a bit and for the record I am not a perfectionist, therefore I don’t care}. There were seven colors: pale pink, bold pink, purple, green, blue, yellow, and orange. I divided the frosting evenly into seven bowls and tinted all the colors. Then, I put star tips onto bags and filled the bags with the frosting.

Do not try to make this cake without seven separate bags of frosting with their own tips.

You may lose your mind if you try to do that. I skimp on bags and tips as a general rule, but this cake makes that impossible.

I took four colors and my husband took three and we just started putting stars on, trying not to touch colors. As the night wore on, I cared less and less {Type-B} while my husband began to feel challenged to make sure no color ever touched {Type-A}. I accidentally touched two stars of the same color and he took it off and fixed it.

He was very passionate about it, even though when we started he thought cake decorating was a pretty lame way for us to spend a Friday evening.

Three hours later: pretty cake. It is really easy to make; it just takes a. lot. of. time. 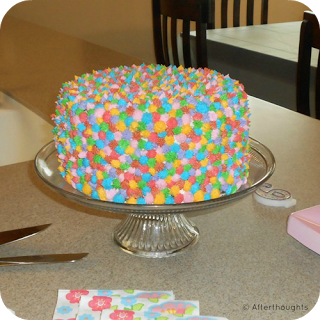 But it was fun and, more importantly, the birthday girl was completely thrilled. There was a lot of oohing and ahhing and jumping up and down cheering, which was very satisfying for the two tired parents hosting the party.

I keep joking to my husband that when they are big I’m not going to make fancy cakes anymore; I will retire. But actually, I can see myself calling my thirty-year-old and telling her to look at all the cakes I pinned on Pinterest–which one does she want?

What can I say? It is a fun tradition.

And see? I made it through the entire post without freaking out that my littlest daughter turned six.

I keep telling them to stop growing up, but they are all four disobedient.

Understanding Guns in America: <i>Res Publica</i>, the Nature of a Republic