[dropcap]T[/dropcap]he Declaration of Independence came after the start of the war, when it became evident that our differences with England — or, more accurately, King George — were irreconcilable. The text of the Declaration, then, gives us many clues as to the cultural, philosophical, and historical context — a context which eventually informed the Constitution and Bill of Rights, including our beloved Second Amendment.

In the Introduction, the Declaration says: 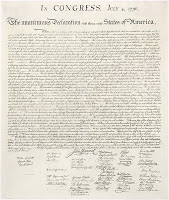 When in the Course of human events, it becomes necessary for one people to dissolve the political bands which have connected them with another, and to assume among the powers of the earth, the separate and equal station to which the Laws of Nature and of Nature’s God entitle them, a decent respect to the opinions of mankind requires that they should declare the causes which impel them to the separation.

So we see that the Founders start right off by referring to natural rights. The next sentence {the beginning of the Preamble} affirms this:

We hold these truths to be self-evident, that all men are created equal, that they are endowed by their Creator with certain unalienable Rights, that among these are Life, Liberty and the pursuit of Happiness.

We often focus on the end of this sentence, but I’ve highlighted some other words above because this is what I’m focusing on today: the concept of natural rights.

Now, the philosophical history of natural rights varies. Some, like Hobbes, believed they came from man himself, from man’s ability to use reason. The Declaration, however, claims that they come from the Creator.

So, you see, the traditional American view is that there are some rights that are universal {they are the birthright of all men}, that are normative {they are prescribed for man by Nature, but obviously can be ignored by men in power}, and that are not to be infringed by an ideal government.

The question, then, becomes whether gun ownership is a natural right. I wish that this was the actual discussion we were having, because then we would be discussing what is normative and prescriptive. We would be having a discussion about some of the most important ideas out there, about things which transcend our own time.

A man in full possession of his natural rights was said to be free. Bearing arms was the distinction of a free man, according to James Burgh {from Political Disquisitions, 1774}:

The possession of arms is the distinction between a freeman and a slave. He, who has nothing, and who himself belongs to another, must be defended by him, whose property he is, and needs no arms.

The purpose of this series, if you recall, is to try and understand gun ownership in America. Why do Americans own guns? Why do we like owning guns? {Why does no one complain that the Swiss own guns? But I digress…}

Today’s lesson is simple. We believe that gun ownership is a natural right — not a legal one. Because of this, any infringement upon it is immoral. Natural rights do not change over time — they are a right of all men at all times.

These are, I believe, good questions to think through.

Read the Understanding Guns in America Series:
Introduction
The Noise that Made the Redcoats Run
Our Inherited Rights as Free Englishmen
Natural Rights and Legal Rights ⇦ you are here
James Madison’s Angel Problem
On Amendments and Ratification
Res Publica, the Nature of a Republic

Understanding Guns in America: Our Inherited Rights as Free Englishmen