Understanding Guns in America: Res Publica, the Nature of a Republic

“The Hardscrabble boys came to school today, Royal tells me.”

“I hear they’re saying they’ll throw you out.”

Mr. Corse said, “I guess they’ll be trying it.”

“They have driven out two teachers,” he said. “Last year they hurt Jonas Lane so bad he died of it later.”

Big Bill jumped up and tore off his coat, yelling:

“Come on, boys!” He rushed up the aisle. Almanzo felt sick inside; he didn’t want to watch, but he couldn’t help it.

Mr. Corse stepped away from his desk. His had came from behind the desk lid, and a long, thin, black streak hissed through the air.

It was a blacksnake ox-whip fifteen feet long. Mr. Corse held the short handle, loaded with iron, that could kill an ox.

“The boys didn’t throw you out, Royal tells me,” Father said.

[dropcap]W[/dropcap]e the People of the United States, in Order to form a more perfect Union…” This is the famous beginning of our beloved Constitution. That little phrase — we the people — sums up the idea of a republic, which comes from the Latin phrase res publica, meaning “public matter.”

I have never lived under any other form of government. I find that, for example, my ideas about monarchy are being constantly unmade and remade as I read about different countries and different times in history because I do not fully understand monarchy.

Or any other form of government.

But I do have an intimate understanding of a republic because not only is our federal government republican, but the Constitution guarantees to each State a republican form of government as well:

The United States shall guarantee to every State in this Union a Republican Form of Government… {from Article IV, Section 4}

In President Lincoln’s famous Gettysburg Address, his final sentence was:

It is rather for us to be here dedicated to the great task remaining before us — that from these honored dead we take increased devotion to that cause for which they gave the last full measure of devotion — that we here highly resolve that these dead shall not have died in vain — that this nation, under God, shall have a new birth of freedom — and that government of the people, by the people, for the people, shall not perish from the earth. 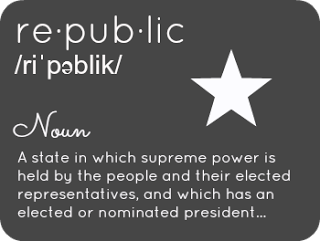 In a republic, the government is you and the government is me. We elect leaders and they lead according to the consent of the governed. If they lead badly, we can even recall them rather than allow them to finish out their term, as my great state did with Governor Grey Davis not so very long ago. We fired him; he no longer had our consent.

It is here, then, that we get into what I think is the symbolic nature of keeping and bearing arms. In a republic, I, the citizen, am a part of the government. I, along with the rest of the citizenry, hold the supreme power. What goes on here is my responsibility, not the responsibility of someone else out there in “the government.” Government starts with me. It starts at home.

In owning and using weapons, then, I affirm that I am a citizen of a republic. In Rome, which clearly had an influence on our founders, as evidenced by their almost unceasing quotation of Cicero, citizens owned and carried weapons. Slaves did not, unless the bearing of arms was a part of their duties {such as if they were an armed guard}. Accordingly, citizens had rights and duties while slaves did not. Slaves were property to be taken care of; only citizens were free.

My gun or my crossbow or my sword — whatever it is I choose to own and operate — is a symbol of not only my rights, but my duties as a citizen of the republic.

Conversely, if the government takes away my weapons, we are no longer on equal footing. It is asserting its right to rule over me. In effect, I become a subject of some sort of monarchy or ruling aristocracy, rather than a citizen.

That a well regulated militia, composed of the body of the people, trained to arms, is the proper, natural, and safe defense of a free state; that standing armies, in time of peace, should be avoided as dangerous to liberty; and that, in all cases, the military should be under strict subordination to, and be governed by, the civil power.

The only nation I’m aware of that practices this traditional republican form of defense today is Switzerland. America obviously has a standing army, and a big one at that. Even though this is true, many of us still believe that the most natural defense is the body of citizens itself because, again, a republic is a public matter, not a private one. It belongs to us all, not to a ruling elite.

This is the way of a republic. This is its nature. We vote. We walk precincts. We run for office. We own weapons. This is all part and parcel of self-government.

Many citizens of our country have not studied the republic. Classical education has been dead here for a hundred years, and consequently we are no longer producing the caliber of men we once saw — the type of men who made up the founding generation. In the public schools, we are constantly told that we live in a “democracy,” while snacking upon shallow soundbites about how George Washington owned slaves or Thomas Jefferson had an affair. When we graduate, we are ignorant.

I was mostly ignorant, and would have totally been so had it not been for the intervention of my father, and one teacher who dared to have his students read the original documents.

I did not really study up until years after I had graduated from college.

In spite of our ignorance in the details, many Americans still have a collective memory, fuzzy though it may be. When someone mentions taking our guns, we get literally up in arms {ammunition sales have skyrocketed lately, as have new memberships to the National Rifle Association}. I think this is a reaction to a symbol. Guns still remain as a symbol of not only our natural rights and freedoms, but of our equality to our government — to the fact that we are not a ruled people.

Read the Understanding Guns in America Series:
Introduction
The Noise that Made the Redcoats Run
Our Inherited Rights as Free Englishmen
Natural Rights and Legal Rights
James Madison’s Angel Problem
On Amendments and Ratification
Res Publica, the Nature of a Republic ⇦ you are here

Understanding Guns in America: On Amendments and Ratification