An Antidote for Theological Naïveté

[dropcap]T[/dropcap]he last time I flipped through the Christian Book Distributor catalog, I sighed. I really shouldn’t have because, after all, Cindy has taught us to mock laugh at their fiction offerings. It is just amazing to me what Christians will {1} believe, {2} sell to each other, and {3} buy. I’m not saying it’s all bad. There are always diamonds in the rough, of course. I really could go on about the mediocre writing put out by most publishing companies these days, but truly it is the ideas that concern me.

A year or two ago, I quit doing book reviews {unless I’m offered a book that I really would be willing to buy with my own money}. This was a very intentional decision. I had enjoyed doing book reviews in the past. It was fun, and I liked the idea of receiving books for free. {I’m a sucker for books, what can I say?} After a while, however, I realized that I was spending my time reading and reviewing books filled with bad ideas and bad writing — and subsequently spending a lot of time anguishing over how to give an honest review while still be gracious and encouraging.

I decided that reviewing these {mostly} terrible books was a bad use of my time. 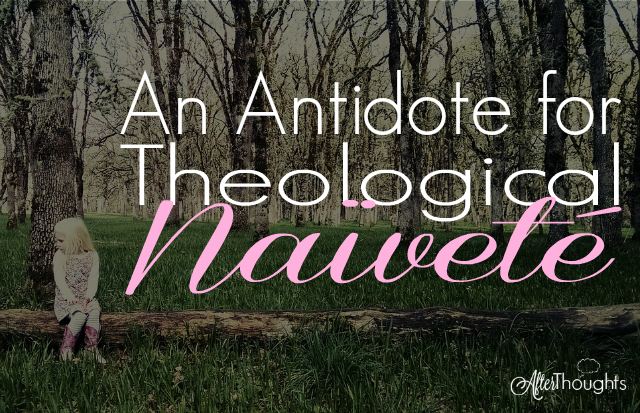 But still, I inwardly cringe throughout the year. I ache for my community when it embraces bad ideas, bad theology, bad stories. Let’s take The Shack. It got a pass into the mainstream because it gave a lot of people warm, fuzzy feelings about God. But if “stories are catechisms with flesh on,” as N.D. Wilson once said, then Houston, we have a problem.

Of course, truly good writing is much more compelling, and therefore dangerous. But I digress.

I flipped through the offerings of the catalog, torturing myself.

I was going to give examples, but I decided that I can only sound cruel and insensitive when I doubt the wisdom of people who “believe in Heaven more” because some child claims that he went there, rather than because the Bible says it’s true.

Over the years, my question has become one of protecting my own children and those I love. How do I help my children become the sort of people who are not blown about by every wind of doctrine, who do not naïvely embrace every new silly book published by a “Christian” publisher, without encouraging them to become also prideful or cynical, neither of which ought to be characteristic of a believer?

I was reading chapter 6 of Charlotte Mason’s sixth volume, when I stumbled upon her answer to this conundrum.

It is as we have seen disastrous when child or man learns to think in a groove, and shivers like an unaccustomed bather on the steps of a new notion. This danger is perhaps averted by giving children as their daily diet the wise thoughts of great minds, and of many great minds; so that they may gradually and unconsciously get the courage of their opinions. If we fail in this duty, so soon as the young people get their ‘liberty’ they will run after the first fad that presents itself; try it for a while and then take up another to be discarded in its turn, and remain uncertain and ill-guided for the rest of their days.

Let’s walk through this quote. In this chapter, she warns against us feeding our children opinions instead of living ideas. Opinions — even if we truly believe they be correct — do not have the sort of substance upon which we can build a foundation for good thinking. Living ideas, Miss Mason says, do.

I once listened to a lecture on teaching the progymnasmata, in preparation for our own endeavors here. The lecturer — it might have been James Selby — discussed the different writing assignments. We ask the student to rewrite what he has read, and we call these writings “variations.” In the Fable Stages, he is to write the story shorter, write the story longer, write it from the perspective of someone in the story, write the same plot but with different characters in a different setting, and so on.

The idea is that the student becomes able to view a story from all sides and from different perspectives. First, he reads the story, which is much like seeing a cube drawn upon a piece of paper. But then, he picks it up and plays with it and turns it around and feels it and views it right-side-up and up-side down.

When he is older, he must do this with arguments. The ultimate orator has the ability to view his arguments from all sides, anticipate possible objections, and answer them himself before they are ever raised by his opponents or audience. This is what we see the Apostle Paul doing over and over in his writings, especially in Romans — raising and answering objections. The is one sign of an expert orator.

To return to Miss Mason’s quote, then, she warns us against the “disastrous” effects of a child or man who has the habit of “thinking in a groove.” This is the person who has never picked up the cube and played with it. He comes of age, and never realizes there are other ways to think about things, and it shakes him to his very core when he begins to hear other perspectives. He loses what little confidence he once had. The ultimate result, she says, is “running after fads,” which is exactly what we see in many Christians — hastening to uncritically embrace every new thought or idea, every new hip blogger, every new book put out by CBD or their local Christian bookstore.

If Charlotte had just left us with a warning, I would have felt discouraged. How do we get children to think outside of the groove? Very few people are teaching the progym; surely there is more to it than that. But right inside her quote is the answer:

This danger is perhaps averted by giving children as their daily diet the wise thoughts of great minds, and of many great minds; so that they may gradually and unconsciously get the courage of their opinions.

So, in addition to their Bible reading and catechism , the “wise thoughts of great minds, and of many great minds” is an antidote.

I love AmblesideOnline. I am currently reading through Year 5, pre-reading for my oldest son, and Year 2, aloud with my oldest daughter. This week alone we’ve had the opportunity to think about Christian ministry to Muslims, women in ministry, the treatment of the poor, how God answers prayer, why it is important for a king to love his country, tactics in war, how the human eye works, and more. We’ve discussed how Jed Smith acted out his faith while among Indians and nonbelieving whites, how he handled the pressures of being a mountain man, and how he repented when he did wrong. We’ve discussed friendship through the lens of Badger, Mole, and Rat’s intervention with Toad. We’ve discussed the power of story and how it seems superior in persuasion in regard to the influence of Uncle Tom’s Cabin upon slavery sentiment {essentially agreeing with Russell Kirk that imagination, not dialectic, rules the world}.

And it’s only Wednesday.

So what about theological naïveté? What specific works guard against this?

Well, I don’t know that I’m the right person to come up with a list, but I’ll try.

For adults, I think much can be done by simply reading Athanasius’ On the Incarnation {this link is to the version that CS Lewis considered “a masterpiece”} and Augustine’s City of God. I haven’t finished either of these {yet — like everything, this is a marathon, not a race}, but just as I’ve noticed that reading Mason inoculates me against every new educational fad and idea that comes along, so reading bits and pieces of Augustine and Athanasius inoculates me against new theological ideas. In fact, they teach me that these “new” bad ideas aren’t new at all, and likewise the best reasons for rejecting them were thought many, many centuries ago.

My husband assures me that Kuyper’s Lectures on Calvanism is equally fortifying, but I have yet to read it. And how could we forget Russell Kirk’s assertion that Pilgrim’s Progress was the antidote to Hobbes’ Leviathan?

For my children, we read Scripture and narrate. That is key. If we don’t do that, we might as well not do anything. But lately, I have discovered something really excellent. Or, should I say, someone really excellent: Simonetta Carr. Last term, we read Augustine. This term, we’re reading Athanasius. {John Calvin is waiting in the wings.} We read a chapter at a sitting, and the children take turns narrating. Through these books, we’ve discussed the importance of prayer, the courage of convictions, sin and salvation, the false doctrines of Arius. Augustine laughed at baptism, but was rebuked by his friend, and we discussed the implications of their conversation. We’ve discussed the right of the Church to govern herself, free from the intervention of kings and emperors.

These little books have been excellent, and my children have discussed doctrine, gently and without knowing it, without getting their minds bogged down in a sort of analysis that isn’t appropriate for their ages, especially the younger ones.

These books essentially do for depth what Trial and Triumph tends to do for breadth and have been a wonderful addition to our weeks.

When we think of “good books,” we often think in terms of books that are pleasant to us. We think subjectively. But good books are more than that. To the extent that they get good ideas into our souls, they fortify us against falsehood, strengthen and challenge and refine our convictions, and mature the soul.