Applying the Progymnasmata to Ambleside Online

[dropcap]B[/dropcap]efore I say anything at all, I need to be clear that all of this has been my own little experiment with my own budding writer. This is not anything that is officially AO. No one from AO has endorsed — or even commented — on what I’m doing in this area. I don’t want to inadvertently mislead anyone around here. 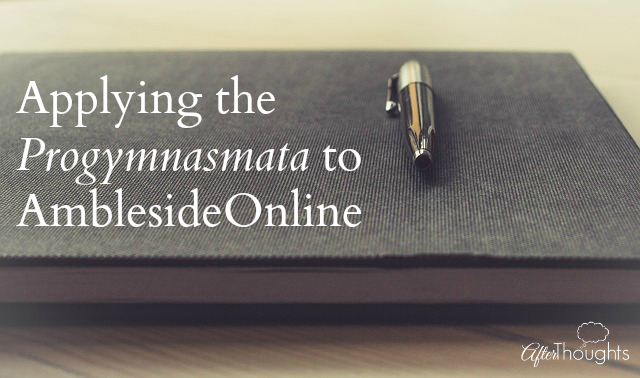 With that said, I am currently working with a ten-year-old Year Five student. My other students are too young for this. Not all AO students are ready for daily written narrations. We can start with one per week, and work up to daily {or even more than one daily} according to the child’s ability.

According to AO Advisory Board Member Karen Glass:

This idea that creative writing should be an extension of narration is not what you find in most writing curricula. The general sentiment of our age is that creativity comes from inside of ourselves, and so we give assignments that reflect this. I believe that only God creates ex nihilo. The rest of us must start with raw materials, and some of us need more raw materials than others. The stories that our children have read will function as their raw materials.

In Towards a Philosophy of Education, Charlotte Mason wrote:

One is not sure that so-called original composition is wholesome for children, because their consciences are alert and they are quite aware of their borrowings; it may be better that they should read on a theme before they write upon it, using then as much latitude as they like.

What is the Progymnasmata?

For those of you just joining us, my claim to “apply the progymnasmata” is misleading, now that I think about it. What I’m really applying are the first two stages of the progym: Fable Stage and Narrative Stage. For our purposes here, I will simply define the former stage as where a child takes a fable {usually by Aesop} and writes a variation of it, while in the latter, he takes a report of something that really happened — an historical narrative — and writes a variation of it. In historical narrative, the student cannot take quite as many liberties as he does with a fable — he cannot, for example, retell it with different characters in a different setting, whereas in a fable he will do so.

The progymnasmata was an ancient writing curriculum. Actually, it was the ancient writing curriculum. There wasn’t, according to James Selby, any other to speak of until about the late 1800s and early 1900s. My guess is that Miss Mason was trained in or at least familiar with the progym, as were her teachers, and that their methods hearkened back to it, hence her assertion that children should read something and then write upon it, taking latitudes.

Unlike what I’ve seen in the progym curricula I’ve looked at thus far, Miss Mason put an emphasis on poetry, and her students often {in their exams} wrote verse upon a subject.

And now I think we’re ready — or will be in Term 3 — to reach my goal of bringing the writing assignments back to the AO curriculum so that we’re not spread out so thin.

Each day, my child will have a written narration to do. At first, I’ll probably select the readings for him because I want to choose whichever works best lend themselves to the assignment. After a couple weeks of that, I think he’ll be ready to begin making his own choices.

For a fiction reading {or, with longer chapters, a chosen scene from the reading}, these are the variation options I’ve thought up so far:

The options would be essentially the same for a nonfiction, historical narrative, except that I’d eliminate the option to change the characters and setting, out of respect for the historical nature of the events.

In addition to this, one day every two weeks or so, I’ll have my student outline a reading instead of doing a written narration. Learning to outline has been really helpful for my student, and I notice that Miss Mason did mention something like it:

But this is only one way to use books: others are to enumerate the statements in a given paragraph or chapter; to analyse a chapter, to divide it into paragraphs under proper headings, to tabulate and classify series; to trace cause to consequence and consequence to cause; to discern character and perceive how character and circumstance interact; to get lessons of life and conduct, or the living knowledge which makes for science, out of books; all this is possible for school boys and girls, and until they have begun to use books for themselves in such ways, they can hardly be said to have begun their education. [emphasis mine]

I think the ideas involved in the first two stages of the progymnasmata suffice for this age and stage, at least in regard to basic literature and history reading assignments. I have considered, however, encouraging more “creative” narrations. For example, diagramming a Shakespeare scene is often the only way I can understand it. Why not teach him to diagram it himself? Miss Mason occasionally encouraged students to illustrate a scene {the story of Beowulf was specifically mentioned}:

I have spoken, from time to time, of original illustrations drawn by the children.

For a child who doesn’t do this on his own, perhaps assigning it once in a while would be a good idea. I’ve never done this, so I’m just speculating.

I plan for us begin this new approach in Term Three. I’m going to spend these last few weeks of Term Two helping him refine his narrative stage work, and then we’ll be ready. I’m trying to decide how to mix up his options. Some folks have talked about a “narration cube,” but I have more options than there are sides of a cube. Perhaps two cubes? Or I suppose I could just let him choose, but tell him to try and do everything once before he begins choosing from the entire list again.

Any ideas on that?

And do any of you have variation ideas to add to my list?

Of Other Worlds by C.S. Lewis