Before spring gets underway–and it was already making itself known at this time last year, mind you–I thought I’d write down some things before I forget them. We made some big decisions, and are anticipating an eventful spring, and so on. 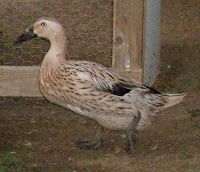 This photo isn’t a very good one, but I’m including it nonetheless. I have to admit that we got into Welsh Harlequins because I fell in love with them while looking through a breeder’s catalog. I loved the white. To this day, I love the way the navy blue wing stripe reflects the sunlight. I love the way the drake’s black head looks green like a mallard when it’s bright out. They are beautiful birds.
When I tried to convince myself that this was a good purchase, I used the points from the catalog: they are descended from, and supposed to be very much like, Khaki Campbells {which we’ve kept for years}, but supposed to be quieter. They are supposed to be equal to Khaki Campbells in things like laying eggs and foraging.
All of this sounded good. We’ve been happy with our Khaki Campbells.
Did you notice I kept saying supposed to be?
I don’t know if we bought from a bad breeder, got a bad batch, or if this breed has been falsely touted. I really don’t know what happened. I just know that they were pretty, but useless when it came to any practical purposes.
They started off well. Our flock of six Khaki Campbells was getting old. One died, and then another. In the meantime, once the Welsh Harlequins {we purchased four ducks and a drake} started laying, we were gathering six eggs per day, and sometimes more. That was pretty good. We had one duck that laid only egg whites during that time, and that was strange.
So for the first full year, from maturity to around their first birthdays, I’d say we got what we expected, except that they didn’t forage as well as the Khaki Campbells, refused to eat kitchen scraps, and consumed twice as much feed as the Khaki Campbells when it was cold. Not a deal breaker, but I know now that this portended of things to come.
Just like our Khaki Campbells, they molted and stopped laying in early fall. The thing is, we never got more than two or three eggs per day after this, even though we kept essentially the same flock for another year. Looking back, I would say that the Welsh Harlequins never started laying again after that.
Last spring, we lost another Khaki Campbell, so we were down to three Khaki Campbell ducks and four Welsh Harlequin ducks, and we were only collecting one or two eggs per day. My husband started making comments about who would be served for Easter, who for Thanksgiving, and so on. Things were not looking good for these birds, as it was.
And then the honking started.
I vaguely recall that our Khaki Campbells went through a stage like this around their second birthdays, but I can’t be positive. This was a loud, goose-like honking that the queen duck began letting loose at dawn. In the summer, it didn’t bother us so much because we were getting up at five to deal with goat kids and we could just let the ducks out and they would quiet down. But as goat chores calmed down and we dared to desire sleeping to six–or even seven–on Saturday mornings, the loudness was an issue.
And not just for us. We live in a residential neighborhood. We expect all animals on our property to be good neighbors, because we want to be good neighbors.
So my husband had me use Craigslist to get rid of them. Fist, I listed the queen, and she went within a day or two. It was so quiet the morning after she left! We thought that was the end of our troubles. But all that day they scuffled around, deciding who the new queen would be, and by the next morning, that queen became the loudest of the flock. This happened two more times as we rid ourselves of successive birds, so it seems that whoever is in charge gets to honk first thing in the morning.
The last two I sold for $10 each for my trouble.
When I listed them, I joked to my husband about how sorry he’d be when we didn’t have eggs anymore at all. We’ll be running a nursing home for old ducks! I said.
Um, no.
You see, I made the assumption that the one or two eggs per day were coming from the Welsh Harlequins because they were younger. But our production levels never changed once they were gone!
So these days we’re feeding less than half the grain {because the remaining ducks know how to forage}, and receiving the same amount of eggs per day. The yard is quiet, the ducks are happy, and though it isn’t a lot of eggs, it does add up to something for me to make eggnog with on occasion {I’d never serve raw eggs from a grocery store}.
We’re discussing what breed to get next. We know our current flock is ageing, and we don’t want to breed the Welsh Harlequin drake because we don’t like those blood lines. I should probably sell him, but he’s so pretty that he makes me happy. Our priorities are good layers, good foragers, not very loud. Do any of you have ideas? We like our Khaki Campbells, but it is always fun to try something new.

We bred Charlotte the Goat to one of Reese the Goat’s buck kids in the fall, and I really didn’t know if it took. We’ve not done this before {we bought Reese already pregnant last spring} and still have so, so much to learn. But after talking with a friend at 4-H, I checked her udder and lo! she is definitely expecting. This means we should have babies in a few weeks!
What I haven’t admitted until now is that this same buck jumped the fence and bred Reese {his own dam} a few weeks after he’d bred Charlotte. I know that some people say that inbreeding isn’t horrible, but Reese has a physical udder defect, so I really didn’t want to line breed her, or breed her for anything but meat babies for that matter. What I’ve read is that it is inbreeding if it has bad results, and line breeding if it has good results, so I guess the jury is out.
Reese is either pregnant or retaining a lot of water.
I keep imagining what the neighbors are going to think if both does have quads and I have ten goats in my yard. I might die.
We didn’t wether the bucks last time because we wanted them for breeding. This time, I think wethers will sell better, so we plan to do that, even though I’m a little nervous because we’ve never done it before. I’m told our 4-H club owns the proper tools.
We really enjoy goat ownership–they are great pets and something like dogs. But Charlotte? Charlotte is incorrigible. She is like the worst toddler you can imagine because she’s over a hundred pounds and very, very strong. I am trying to train her to the milk table these next few weeks before the babies come and I cannot tell you how frustrating it is. She will. not. obey.
Ever.
So every day, twice per day, I have to drag her by her horns to the table. Then, I pull up while A-Age-Seven grabs one front leg and E-Age-Ten grabs the other. They place her front legs on the table while Q-age-Six pushes Charlotte’s behind as hard as she can, effectively forcing her to jump onto the table. Then I force her head forward and lock her into the stanchion before she can escape. And then we reward her with her grain and mineral ration with sunflower seeds on top.
She loves the grain, but she has yet to love anything more than disobeying.
It feels like it’s never going to get easier, and the truth is I have tried before and it never did get easier, but now, if she’s going to be a respectable dairy goat, we’ve reached the point of no compromise and she just has to do it, period.
Can you sell goats to the glue factory like you can horses?
Ahem.
The only other thing I’ll say about goats is that I’ve learned a lot about parasite control this year. If you know anything about goats, then you know they are prone to worms–lung worms, intestinal worms, etc. They get them really bad right after giving birth.
Each goat that has come onto our property {and we’ve owned a total of six this year} has had a bad case. We’ve used an herbal wormer from Molly’s Herbals to clean them up, and then Pat Coleby’s suggestions to keep them clean. Truly, it has been amazing. Coleby basically says that worms will not stay in a goat that has the proper copper levels in its body. I had copper supplements available free choice, but the goats never ate enough on their own. Three or four months ago, I began sprinkling a daily copper ration on their grain feeding {along with dolomite powder}. Ever since then, they’ve been parasite-free.
There are two schools of thought on worming that I’m aware of. The first is that you worm on a schedule. You do it regularly, even if your stock have no symptoms. The second school of thought is that you wait until you see symptoms and then do it. The reasoning for the latter is that worms, like other critters, become immune to treatment over time because only the most immune survive to breed in the future. By only worming when you see symptoms, you are giving time for a weaker organism to establish itself–not just inside the animal, but also the ones that come out in their manure and become part of the environment of the pasture.
I chose the latter approach because that fits with my philosophy on a lot of things, and it fits my wallet really well, too. However, comma, my choice didn’t really matter because before we established good copper levels, we were treating almost as often as we would have needed to on a schedule. I haven’t had to treat in many months now, though. I think this means Coleby is right because the only thing I changed was their copper intake, though of course only time will tell me if it’s the new pasture {we redid it this fall} or the colder weather.
So that’s it: copper is good and Charlotte’s been bad, and spring is coming whether we’re ready or not.
✕

An Antidote for Theological Naïveté