Son E. turned eleven on Saturday! Si and the girls were out of town for Si’s {much} younger brother’s wedding, so opportunities to celebrate together were in short supply. Yesterday, I made a little cake, and then we had some extended family over for about an hour for cake and ice cream and birthday greetings and gifts. It was simple and fun.

If you recall, last year the boy insisted on pie and so I didn’t get to make a cake. I was pleasantly surprised that, even though he prefers other desserts to cake, he had a cake picked out this year that he had seen me pin on Pinterest earlier this year. It really was a perfect fit for him. 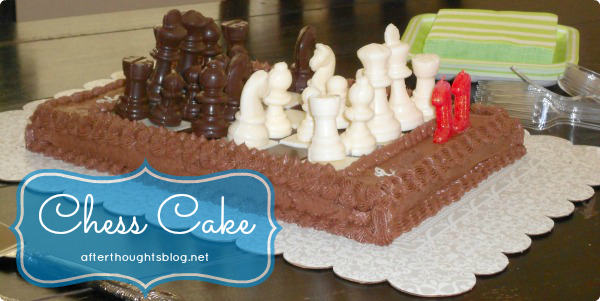 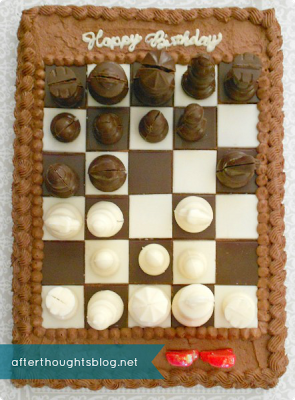 I got the idea from Rebekah. Now, hers was much nicer than mine, for two reasons. First, her candy chess pieces turned out better. I figured out how best to do it about halfway through the process, but didn’t have time to melt down the first pieces and redo them. {This bird’s eye photo shows the cracks.} But also, hers was a nice square. I could have done that, but we were having such a small party that I would have had an entire cake’s worth of leftovers. As it is, we have three pieces left {and I even took a couple next door!}.

The “Happy Birthday” didn’t turn out as nicely as I’d liked, but this was a first time, too. I printed out a font I liked and put it under wax paper. I piped hot candy onto it and let it cool in the fridge, then peeled it off and placed it on the cake. If nothing else, it was fun. Next to the candles was my son’s name, but of course you know I don’t share that here on the blog. I promise it did not say “E-Age-Eleven.”

At Rebekah’s suggestion, I bought the candy molds for both the chess pieces as well as the board. This really gave it a professional look, while being easy as far as cake decorating goes. Using molds is always easier than freehand, or at least it is for me.

Considering that E-Age-Eleven likes chess very much and plays it regularly with friends and his granddad, this cake was wholly appropriate!

All Education is Self-Education