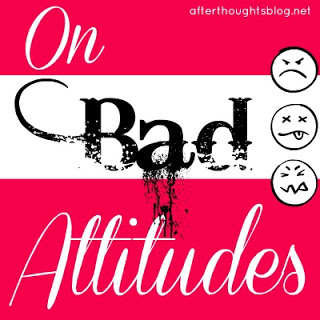 We’ve covered the other aspects of bad attitudes. Remember: we’re mainly discussing the child who is obnoxious about his lessons. If you have a generally well-behaved child who groans about math or declares he hates lessons, you’re in good company in this post.

We’ve talked about the possibility of starting too young or choosing bad books. We discussed the advantages of varying the lessons, as well as getting to the source of the child’s frustration. Last time, we talked about Mommy’s {bad?} example, and also considered other variables, like hunger or sleepiness.

This time, we’ll talk about habit formation and discipline. These two are opposite sides of the same coin. On the one hand, we have discipline. This is reactionary in nature. The child does something wrong, and so Mother is obligated to respond appropriately. Children need consequences, plain and simple. Habit formation, on the other hand, is proactive. It trains the child up, and the result tends to be that he doesn’t require as much discipline, if that makes sense.

Nip it in the Bud

Oh, if we only all understood this when we first became parents! We really might save ourselves a lot of trouble if we trained our children from the time they were very young. I remember when we first learned the idea of training from some friends of ours. We had already gone through the toddler-running-away stage with one child, and we weren’t looking forward to our second child learning to walk! These friends taught us that there is a better way. Instead of disciplining the child for running into the street, why not teach the child, right from the start, to come when called?

It really is best for the child’s safety, after all.

And so we did this with our second {and eventually third and fourth} child. We practiced in our living room. Once she was really able to walk, I would direct her to “go to Daddy.” Or he would call her. And vice versa. In a few nights, she had a habit of coming when called. Our last toddler was more difficult to train, but still responded nicely to the practice. {He was known to require refresher courses, however.}

Nipping these things in the bud–building good habits before the children even have time to build bad ones–requires a lot of forethought, but pays huge dividends. For years, much of my mothering approach was purely reactionary.

Charlotte Mason, along with a couple dear friends, have really challenged me in that area, though, and recently I got to try out the nip-it-in-the-bud approach. Many of you know that I began giving piano lessons to my oldest. I know that practicing piano can seem like a pain to a little one. I remember complaining about it when I was young. So I came prepared. First, I didn’t begin teaching him until he really, really wanted to learn. Next, I told him that I’d only teach him if he was ready to give it the practice required–thirty minutes per day, six days per week. {Our friend Charlotte calls this “enlisting the will.”} Finally, I was armed and ready with a plan.

Sure enough, about a week later, I heard grumbling. “I don’t know why I have to practice this. This is such a pain.”

I ran to the piano and stole his book.

“Oh, no. No, no, no. The agreement was that I would teach you if you would practice. You agreed, so you cannot grumble. Let me ask you again: do you really want to learn to play?”

He said yes, and so I let him know that there would be no grumbling. Period.

And then I gave the book back, and I haven’t heard a peep of grumbling since.

{I will say that I think it also helps that we have a satisfying curriculum.}

I know this sounds so simple, but let’s think about it. Charlotte tells us that unlearning a bad habit is like “doing violence” to the person. It is so, so hard. By comparison, heading off a bad habit at the pass is easy. We just have to be vigilant, on guard for the new bad habits that invariably tempt our children to adopt them.

By the way, the first mistake we parents make is to not take something seriously because it is the first time the child has done it. I used to think this way myself. Well, she’s not done this before, so I won’t make a big deal out it. Now I ask myself what I’d think if this was a habit, and respond accordingly. Charlotte tells us to watch closely at the “letting out of the waters,” and this is what she means.

The official Charlotte Mason steps to habit formation {which are used to break bad habits and replace them with good} are fairly simple:

I don’t have time to go into all of this today, and I have written about this extensively in the past. At the bottom of this post will be links to old entries that summarize Charlotte Mason’s work on this subject. If you really want to study habit formation, I’d suggest Charlotte’s fifth volume, Formation of Character.

It used to be that when I read Mason’s work, I’d ask myself where she found all of these perfect children. Did the British people have an amazing gene pool, or what?

I know this can’t be true. Children are born with a sinful nature, and they will look Mommy in the eye while doing exactly the opposite of what Mommy said. And this sort of defiance requires consequences.

Sometimes, the child’s will just cannot {or will not} be enlisted. The child does not want to comply. Period.

What can be done?

I don’t feel comfortable discussing discipline in detail here. I feel this is better discussed in something book-length, which covers all the required caveats.

With that said, there have been a number of times where I have told the children that they will form such-and-such habit. And then I tell them that their father than I have decided that this is best for them. We are the ones who will be held accountable for their upbringing–not them. This is hard for children to understand. They think they are accountable for themselves, but they are not–not yet, anyhow.

I have also been known to turn this into a trust issue. Do they trust our love? Do they know that we want what we believe is best for them? I try and teach them to rest in that, even when they don’t understand. I have since had at least one child come to me and say that he was thankful for a decision his father and I had made, that even though it felt unfair at the time, he now sees the situation differently, and he is grateful that we did what we thought was best for him. It is my hope that when my any of my children are resisting habit formation, and discipline steps in to fill the gaps, that they will reap that sort of fruit at some point in the future.

One thing I think ought to be said on this subject, and often isn’t, is not to be afraid to discipline for attitudes. God disciplined the Israelites for their grumbling all of the time. Our own grumbling is always a sign of some other sin–lack of trust in God’s sovereignty, lack of contentment, etc.

Children’s lessons are sort of like potty training. We have this expectation that it can be accomplished without discipline, but any teacher you talk to will tell you this is not so. Don’t be afraid to discipline your students. My oldest would probably still be in diapers if someone hadn’t given me “permission” to discipline him for defiance during potty training!

Before I leave off, here are books which discuss child discipline that we have found helpful. I can’t say that we live any single book, but we have been influenced and like any journey, ours has a decent bibliography, so here I have tried to be selective.

I promised there would be some links to old posts on habit formation. Here they are:

Read More in this Series:

Should I Make My Child Apologize? (Part One)