Reflections on Faerie Stories: All I Ever Needed to Know I Learned from Prince Darling

If Prince Darling has one weakness, it is that it tries to be good at everything. There are so many lessons that it is hard to know where to begin {though, arguably, the beginning would work ahem}. My favorite faerie stories tend to be singular, to have only one lesson in mind. But if those stories be nutritious snacks, then Prince Darling is a holiday feast.

We have room in the calendar for both, do we not?

So, let’s take a bit of a romp through Prince Darling and the lessons it can teach us.

:: Who I am is first revealed in how I treat the least of these. 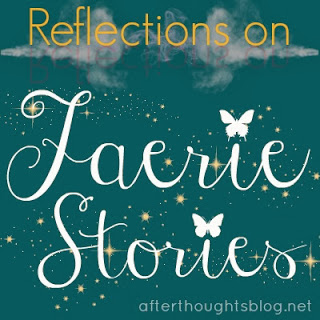 When Prince Darling first begins to reign {after the death of his father}, he is so good that the corrective ring given him by Fairy Truth never needs to prick him. This all changes when he loses his temper while hunting. The first thing he does is to kick his little dog.
Fairy tales often clue us in on a man’s character by showing us how he treats children, the elderly, the poor, and animals. Surely there is a lesson in here, even if, in this case, Prince Darling is more of a mixed bag.

:: The reason really will justify any initial idea accepted by the will.

Charlotte Mason said this in her eighteenth principle, and we see this clearly:

“I believe the Fairy is laughing at me,” he thought. “Surely I can have done no great wrong in just kicking a tiresome animal! What is the good of my being ruler of a great kingdom if I am not even allowed to beat my own dog?”

Here we see a classic case of self-justification. The prince rationalizes that what he has done is acceptable because of his position as ruler. In other words, he doesn’t believe in the rule of law.

From this point on, any and all transgression will be justified because the prince has accepted a powerful initial idea. Namely, he now believes that his authority is ultimate rather than derived.

:: The habits that form our faults are often established in early childhood.

Unlike many fairy tales, this one gives us a glimpse into the prince’s psychology:

The fact was that he had been brought up by a foolish nurse, who had spoilt him when he was little. If he wanted anything he only had to cry and fret and stamp his feet and she would give him whatever he asked for, which had made him self-willed; also she had told him from morning to night that he would one day be a king, and that kings were very happy, because everyone was bound to obey and respect them, and no one could prevent them from doing just as they liked.

Echoes of Charlotte Mason again here. But of course, this is because she was saying something that was {and is} true.

[B]y that time his faults had become habits; and a bad habit is very hard to get rid of.

When the fair maid Celia refuses to marry him {because of the grief his deeds would daily bring to her should they wed}, he decides to woo her put her in prison.

In case you were wondering, this does not work.

The prince has a foster-brother who was wicked, who encouraged wickedness in the prince, and who played upon the prince’s idea that he should be supremely obeyed by everyone in the kingdom. This foster-brother actively seeks out a good adviser and frames him for something he did not do, in order to have him banished from the kingdom. This was done for fear that the good adviser, if allowed to remain in the province, may again one day gain the prince’s ear.
When we look at a man with authority, we do well to seek out those to whom he listens, and examine their character. Often, they may be worse {or better} than the man himself, but undoubtedly these counselors will tell us the sort of path the man is on.

:: Trials are given us for our good.

The Fairy Truth turns Prince Darling into an ugly beast as punishment for his wickedness. Like Nebuchadnezzar before him, the goal is his repentance and reformation, not simply debasement and humiliation. The prince is soon imprisoned {a la a carnival freak} in a royal zoo. The zookeeper treats him badly, but nonetheless discipline begins to do its magic and the prince starts to take some steps toward good character. In the zoo, he learns to return evil for good — to do what is right, even to his enemies.
At this point, he is transformed into something a little more pleasant: a little dog. He isn’t fed much, but in this form, he learns to share what little he has with someone in need.
As a reward, he is transformed into a dove, which enables him to fly away and seek out Celia.

:: Pleasure promises much, but delivers a great deal less than that.

There is an interesting interlude included in the story, and it doesn’t do much to progress the plot. I have always wondered why it is there, though it be beautiful and striking. It explains why the girl with whom the prince-as-dog shares his food is starving, it would have been much more expedient to say that she was poor {and perhaps heavily taxed — ha!}.
Instead, in our story, we are informed that she is starving because of the House of Pleasure:

[H]e was surprised to find that the brook was gone, and where it had been stood a great house that seemed to be built of gold and precious stones. Numbers of people splendidly dressed were going into it, and sounds of music and dancing and feasting could be heard from the windows.

But what seemed very strange was that those people who came out of the house were pale and thin, and their clothes were torn, and hanging in rags about them. Some fell down dead as they came out, before they had time to get away — others crawled farther with great difficulty, while others again lay on the ground, fainting with hunger, and begged a morsel of bread from those who were going into the house…

When some food is thrown from a window of the mansion, the hungry little dog makes as if to eat it. The starving girls stops him in time.

“Don’t touch it, my poor little dog — that house is the palace of pleasure, and everything that comes out of it is poisoned!”

the dead are there; and that her guests are in the depths of hell.

There is, eventually, a happily every after, where the reformed prince is able to woo and marry Celia {who, like all real princesses, is as good as she is beautiful}, and that with the blessing of Fairy Truth herself!

This is a story worth reading at any age. It can be read in small bites — a short scene at a time — and discussed. We’ve barely begun to plumb its depths. Some tales are simple, but this one is more complex and has much wisdom to share with us.

This is, incidentally, what I mean when I say that in the midst of the debates over whether Christians should or should not read fairy tales — presumably because they include magic — the tale itself is usually lost. Because I don’t accept the idea that magic in a story is always a bad thing, I prefer to judge the tale by its own merits. Does it teach what is good? Does it have wisdom to share with us? Can a soul be improved by its reading? By this criteria, not all fairy tales are good ones, nor are they all worth our reading.
But Prince Darling is one I number among the best.

Wednesdays with Words: Archimedes and the Door of Science by Jeanne Bendick

Sing a Song of Christmas