[dropcap]I[/dropcap] cannot, for the life of me, remember who first suggested Ruth Sawyer to me. It was sometime this year that I heard of her. I found a couple picture books on Amazon that were hardbound and beautiful, and I couldn’t resist. I only paid a few dollars, but I guess the word has gotten out because the prices have gone up significantly since then.

Or, on the other hand, perhaps that happens every year at Christmas? 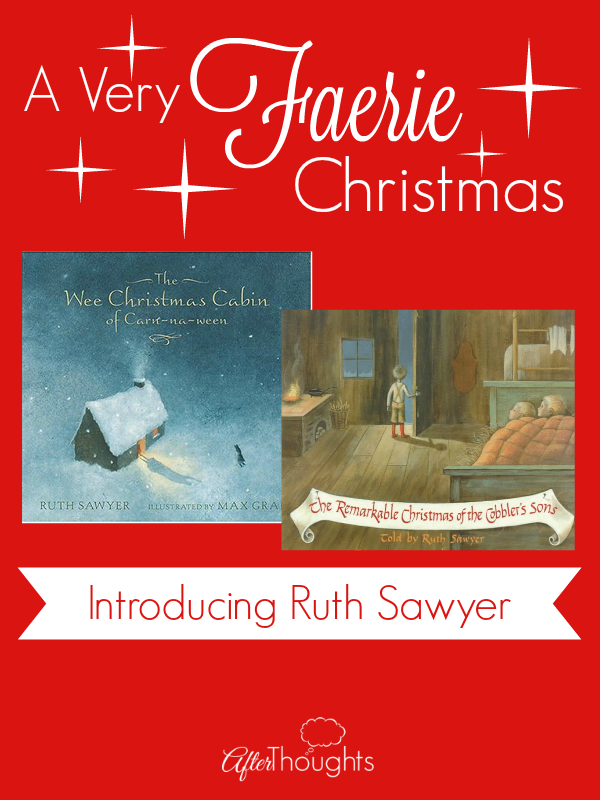 I try to add a book or two to our collection of Christmas books and picture books each year. First, I purchased The Wee Christmas Cabin of Carn-na-ween. This is a haunting fairy tale that takes place during the time of the Irish Potato Famine. It’s a sad story, but a good one. We loved the illustrations by Max Grafe. I don’t do a very good Irish accent, but it was easy to try my best because of the way Sawyer has written her books; it doesn’t feel right read in anything other than a lilting voice.

From cabin to cabin, whenever trouble or need abided, there went Oona. In a cabin where the mother was young, ailing, with her first-born, there you would find Oona caring for the child as if it had been her own. In a cabin where the childher had grown and gone dandering off to Belfast, Dublin, or America and left the old ones behind, there she tended them as she would have tended her own had she ever known them. In a cabin where a man had lost his wife and was ill-fitted to mind the house and weans alone — aye, here she was the happiest. She would be after taking over the brood as a mother would, gentling the hurt that death had left behind and for herself building afresh the dream.

But her birth betrayed her at every turn of the road.

The second book I bought was sure to be fabulous because it is illustrated by Barbara Cooney, who only works with the best, don’t you think? The Remarkable Christmas of the Cobbler’s Sons is a tale of magic-as-mercy-to-the-poor. Oh, how we laughed when we read it! Sawyer’s writing is a delight.

Now a year came, with every month following his brother on leaden feet. The little boys and the cobbler heard the month of March tramp out and April tramp in. They heard June tramp out and July tramp in. And every month marched heavier than his brother. And that was because war was among them again. War, with workers taking up their guns and leaving mothers and children to care for themselves as best they could; and there was scant to pay even a poor cobbler for mending shoes. The whole village shuffled to church with the soles flapping and the heels lopsided, and the eyelets and buttons and straps quite gone.

As I’ve said before, cold weather makes me long for magic. We’ve been wandering in Narnia lately, for example. Ruth Sawyer has been an unexpectedly delightful addition to our Faerie Christmas collection. If you’re looking for some faerie this Christmas, I highly recommend her! These books have quickly rocketed to the top of our list of favorites.

The Don’t Look Theory of Parenting