Under the Sea Cupcakes

[dropcap]O[/dropcap]nce upon a time, Friend R. and I were pregnant at the same time. My baby was due on Christmas day, and hers was due about a month later. Because my baby came late, and hers a bit early, our seven-year-old girls are only two weeks apart, which has been so nice. I love that they are growing up together.

This past weekend, we celebrated a seventh birthday, and I was able to help R. with the cupcakes.

I may make nice cakes, but R. has the ability to throw a nice, put-together party, something I don’t do. I make a cake and tell the children they can all play in the backyard. That is my version of a party. But R. always has pretty decorations and activities planned — her life is much more Pinterest-worthy than mine, if you know what I mean.

Anyhow, since I’m sick today {and wallowing in my own misery}, I thought some details concerning the cupcakes were in order. 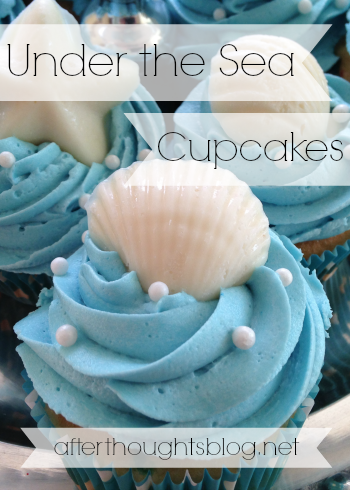 This was great fun for me because I didn’t have to clean a house to prepare for a party. I didn’t even have to make the candy seashells, as R. did that during the week leading up to the party. All I had to do was show up with my frosting tips and bags and have a good time. This I could get used to!
These turned out so nice, and yet they were super simple. I used Wilton’s 2D tip with the large coupler. I tried to let the frosting flow sort of ruffly to get a water look. I’d never used this tip before, having bought it especially for this project, but I look forward to getting to know it better!
To make the candy, R. simply used white candy melts poured into some simple seashell molds. The “pearls” are Wilton sugar pearls, which looked even better in real life than they do in this photo.

If you want to completely duplicate this project, I noticed you can even get the blue dot baking cups on Amazon! I think this is my first cake project where literally everything was available online, which is nice because I know that not all of you have access to cake and craft shops.

Because the candy and pearls were ready to go, and R. had basically made the frosting before I arrived, it only took us about an hour to tint the frosting, prep, and decorate them. I love projects like this, that are simple, yet pretty.

Updated to add: If you are trying to muster the gumption to frost cupcakes this way for the first time, I highly suggest this simple photo tutorial from Wilton. Using the 2D tip simply gives it a softer look.

The Power of a Story

It was actually a DM conversation with @shareablec