I don’t usually do this, but I’m asking you to give money to someone, if you feel inclined. Two someones, actually. Two girls in our city lost their mother to complications due to the flu. As if that were not enough, their father was suddenly diagnosed with Stage Four cancer, and died ten days after their mother. The girls are 13 and 19, and a site has been set up to collect donations to help provide for their education and other financial needs in this time.

We purchased an antenna earlier this year, just so our children could see the Olympics. It is about time they know what winter sports are.

Or what winter is, for that matter.

I recently realized that Jen and I not only went to the same school, but were there at the same time! She tells me I realized this before, one other time, but leave it to my brain to enjoy making the same discovery twice.

It’s a sieve sometimes, I tell you.

She also thinks she knew my husband while she was there. How cool is that?

On Monday, O-Age-Five was in rare form. This happens when he’s fighting a virus. He becomes a very difficult person. Also: very loud. It’s like he cannot stop talking for long, no matter what. There was a bit of comic relief in the midst of a day spent dealing with his antics.

First, Q-Age-Seven had saved a piece of pizza to have for snack, but he walked up a took a big bite when she was out of the room. We don’t usually do this, mind you, but in that moment, Si and I advised him to run. Run! we said. Quick! Before she comes back and finds out what you did! This is very bad parenting, so don’t try this at home.

Anyhow, she came back in, and so I again urged him to exit, and quickly. A short time later we heard a little voice in the back room, “Run! Run! As fast as you can! You can’t catch me, I’m the gingerbread man!”

Later, Siah was doing some tests on him for his virus. It comes in handy, sometimes, being married to an alternative practitioner. Anyhow, Son O. was singing highly annoying rhyming songs, to the point where we could not hear ourselves think. Si finally asked him to please quiet down. Surprisingly, Son O. promptly quieted down.

Approximately thirty seconds later he said, “I’m saying it in my head.”

Yesterday, we went to our local planetarium. I’m not very good about field trips, so this was a nice change for the children, I’m sure. It was amazing. We took a tour of our winter night sky, and also our solar system. If you have a planetarium in your city, you should definitely check it out.

It’s February, which means everyone is talking about burnout. Why not me? I’m looking for a sixth take, after all.

So, here are my only three tips:

The construction project is coming along nicely. We started off Monday morning with a compaction test. This is to make sure that the ground won’t settle too much under the weight of the building, and do something crazy, such as fracture the foundation, in the process. We passed that, and so we move on to framing in preparation for the concrete foundation. 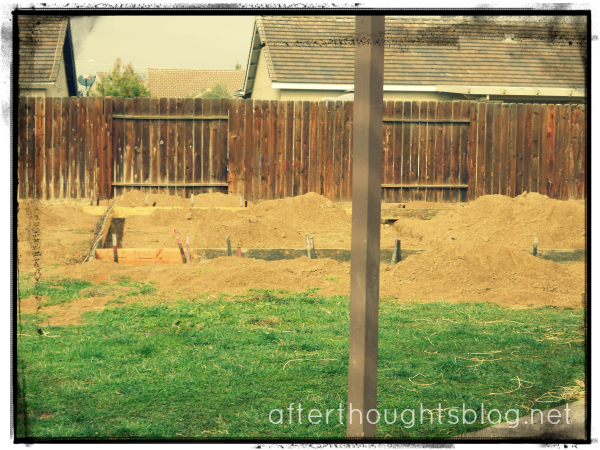 We’ve been told that, once the concrete is poured, it’ll only take about 45 days. I can’t help but wonder if that is true, but here’s hoping!

And that is all for this Friday. I hope you all have a wonderful weekend!