Love as the End of Learning

[dropcap]C[/dropcap]hapter Two of Desiring the Kingdom is called Love Takes Practice and it really can be divided into two parts. The first is Smith’s detailed discussion of Moulin Rouge. The second is his discussion of thick and thin practices.

I talked about thick and thin practices back in October in my post The Discipline of Habit, so I thought I’d mix it up and discuss something different today. 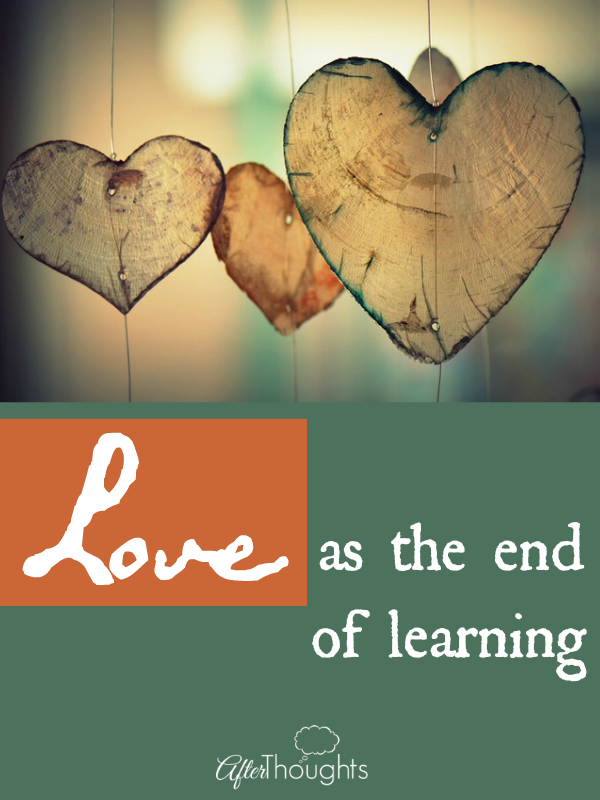 Specifically, I’ve been thinking about this quote:

The end of learning is love; the path of discipleship is romantic.

I’ve been going back and forth on this.

On the one hand, I agree. If we’re going to say that education is the ordering of the affections, then we are saying that its end is love, yes, I think we are. And when I’ve spoken to homeschoolers before, I’ve even used the term “wooing” in regard to my approach to dealing with children who think they do not like something we’re studying in lessons.

Smith even deals with what would be the usual objection to this assertion. He writes:

Of course, one problem with this is that some people think that eros is sin, which might explain why the word is never used in the New Testament. This is sort of an argument from silence, though, as there may be a number of reasons why the word is not used. Another issue is that words which name sin are generally used in the New Testament — for example porneia, from which we derive the English word pornography.

Really, what is ignored here is, instead, the fact that the New Testament uses agape over and over to describe love. Except, of course, when it uses phileo.

All of this is to say I’m not sure. I’m not sure about Smith’s assertion about “rightly ordered eros” and whether that is even possible.

But his point remains, and maybe I shouldn’t quibble so much with his word choices.

So, the end of learning is love.

Anytime I encounter someone who has fallen off the horse, I feel compelled to pull them back on, regardless of which side they fell from. So Smith, in my opinion, is still falling off the horse when he says “the end of learning is love.” At least, sometimes I think that.

Other times I disagree with myself.

But when I agree with myself, I think that I think {ha!} that I like better what CiRCE says, that education’s end is wisdom and virtue — and, ultimately, knowing, glorifying, and enjoying God. There’s a lot of love in there, without it ever being mentioned, but I think it includes all the other necessary aspects. There is a fullness here with which I can agree without reserve.

Smith spends a bit of time quoting Charles Williams and who doesn’t love an Inkling? Touchstone Magazine says that Williams fell short of Greatness for essentially one reason:

The mystery ingredient that stops Williams just short of the Greatness category may be revealed in a comment Lewis made about him. Williams was self-educated. His mind had never had that experience of sustained, given discourse that comes in the lecture room and the seminar. He had had to drop out of school and go to work, since his father never was able quite to bring in enough money to keep the family going.

Now this is interesting, considering our conversation here. Williams had the love for sure. The guy had more love in his pinky finger than most people do in their whole souls. He definitely had an F {for feeling} on his Myers-Briggs. I have a T, which means I totally don’t get him.

My point is that he had love in excess, and yet he fell short of greatness because something was lacking in his education. At least, according to CS Lewis this was so.

We just can’t get away from the idea that education rightly understood deals with the whole person. Body, mind, and soul. I know some people are uncomfortable with a three-part division, but I think that, practically, it can be helpful, if we think of the mind as containing the intellect and the will, the soul being the seat of the emotions, and the body being the physical. Because we are one and not three, all these aspects of our being matter.

Which is why I don’t think John Senior is denying the importance of love when he writes:

The long tradition of Western civilization says that education is the acquisition of not only a skill but a discipline, which in turn means not the exercise of the heart, soul, strength, and mind in the service of our appetites, but the subjection of our appetites to the rule of intelligence. {p. 17}