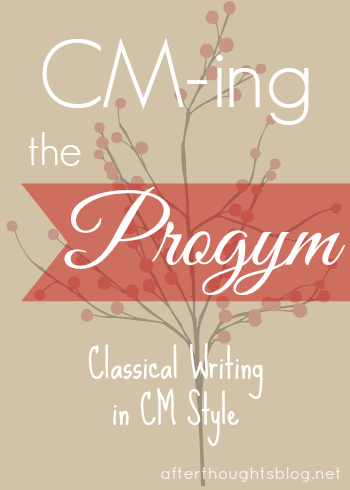 So. Your student hasn’t mastered the variations, by any means, but he gets what they’re about. Since we’re not trying to get through a curriculum, but rather introduce the child to the idea of variations {basically, how variations are supposed to work}, we can drop the special progym lessons and move on to using what we’ve learned in the course of our normal daily lessons.

I’ve written about this before, so you’ll want to hop on over and read that post.

I do have a couple things to add to it, though.

The first is that these students may need to be taught to only use a part of their reading for a variation. Up until now, they have been using very short selections, and therefore the whole thing. But if they try to do that with a ten page chapter, they are going to spend far too much time on writing, and no one is going to be very happy.

If you recall, Charlotte Mason’s fourteenth principle makes allowances for this:

As knowledge is not assimilated until it is reproduced, children should ‘tell back’ after a single reading or hearing: or should write on some part of what they have read.

It’s okay to focus on a part. CM-approved, even.

And you’ve kept the Charlotte Mason police at bay for yet another day.

So as I was saying, you might need to teach them to select a part of their reading on which they will write.

The other thing I want to add is actually my current variation list. My student chooses from this list daily, and I have asked him to not use the same variation within a week, and to try to make sure he is hitting them all every once in a while.

Now, you’re probably looking at this list and thinking that some of these variations weren’t on other lists in this series. That’s true! I’ve added variations as we’ve gone along. I think I got the newspaper article idea from Mama Squirrel. They’re just things I’ve picked up along the way.
I got the questions idea from Miss Mason herself!

Let the pupil write for himself half a dozen questions which cover the passage studied; he need not write the answers if he be taught that the mind can know nothing but what it can produce in the form of an answer to a question put by the mind to itself. {Vol. 3, p. 181}

Can you think of other variation options? I’d love to hear about them in the comments!

Next time, we’ll finish up with some examples of student writing. I’m excited to show them to you mainly because I’m going to use some more recent writing, and you’ll see how fun these variations can become over time.