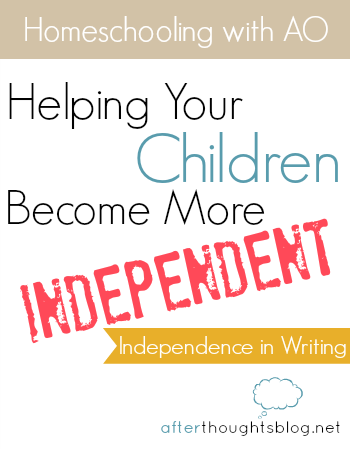 [dropcap]W[/dropcap]hen a child first begins written narrations, I think it is good to choose which book they will write about. We want to choose a book with which we think they will be successful.

Some books lend themselves more easily to written narration, I think. I like to begin with literature, or else really compelling history narratives. Children don’t always know which book will be easier for them to write about at this stage because they’ve hardly written.

As time goes on, however, there will no longer be need for that kind of control. They have learned to do written narrations, so why not let them choose which book?

It goes a step further when we begin the Progym. Just like with early written narrations, when they are first beginning, I choose the selections for them. We actually go back to the Year One Aesop selections and work with those; they really do lend themselves to the exercises. But, as the child begins to master the exercises, and has a number of variations under his belt from which to choose, again I suggest: Why not let him choose?

These days, my Year Six student has a list of narration options. There are normal narrations, letters to the editor, newspaper articles, changes in perspective, changing dialog to narrative {or vice versa}, and so on. I have asked him to make sure he doesn’t focus on one variation, to the exclusion of the others, but beyond that, he brings me what he has decided by himself to write. Through this, he has figured out that certain subjects or genres lend themselves better to the different variations. We have one variation called “ask five questions” and he almost always uses this for science, because it naturally flows from his reading — he wants to ask questions after most of those readings.

Sometimes we don’t let them choose because we think they will make a bad decision. Maybe they will choose to write on something that ends up taking too long.

Let me just say in advance that they will.

But they also won’t make that mistake very many times! Let them make mistakes, and then talk about what they can do better, and I say this even if it means that the writing is a big fail for the day.

One day of failure may be the seed that eventually bears much fruit.

So many times, our children are not independent because we are trying to make this day right now easier. While there is a time and place for that, a habit of it is going to result in Mom carrying far too much of the weight. And one day she’ll break, if she’s not careful!

So, independence in daily writing, just like independence in most areas, will have its bad days. But the end result — a student who feels {and is!} responsible for his own education — is worth it.