Right on schedule, I did something dumb. It had been at least 24 hours since my previous faux pas. This time, I committed a scheduling disaster. My friend owns a big consignment sale that happens twice per year. Here is what happened on Facebook last week. First, this:

Now, normally, I’d say something like “oh I’m sorry about all that” or whatever, but instead, I had to panic:

And here I thought I was so smart and had planned ahead.

By the way, if you are wondering why I never mentioned before that I am on Facebook, it is because we can’t be friends. Unless, of course, we are already friends there — in which case, you can skip to Take 3. My Facebook account is for people I’ve met in real life, plus some people I work with for AO.

I bought two brand new timers. I was thrilled when I found some on Amazon really cheap {less than $2 at the time} because I hate how often my children break my timers and they have gotten to where they cost almost $10 apiece! Too much!

But notice that I used the past tense “was.” I was thrilled, until the rest of my order arrived without them. So I checked my order online and discovered that it would be taking three weeks to get here because they were coming…from China.

I am now haunted by the idea that I bought timers made by slaves.

Sometimes, I think my husband is being a very understanding listener. It is always disappointing to discover he’s really trying to think of a joke.

So the other night, when I was telling him how excited I was that E-Age-Eleven had said that, if he were going to write a book, he’d hope to write like the author of Ben-Hur {which I thought was a sign of aesthetic good sense} he paused and looked at me and I was thinking, I love this man and then he said it.

Early this week, I had to face the fact that there was no way that everything was going to get done. So, I did the only reasonable thing I could, which was to go back through my school plans and split this week’s work into two weeks instead. I’m calling next week “Week 24b.”

This turned out to be a great idea, especially when things like funerals and trips to the doctor for infected ear piercings began to happen. This week has been an interesting ride. I’m glad it is mostly over.

It’s supposed to be hot this weekend. I don’t think it is ever okay for the weather to swing forty or fifty degrees in one week, but nobody asked me. With that said, I think I’ve made my last soup for a long while. We ended with a highlight: zuppa toscana, with homegrown kale {thanks, Dad!}. All of this is to say that it’s time to break out my Simplified Dinners and remind myself how to prepare foods that aren’t soup.

This week, I thought I was going to post a photo of the inside because nothing was really happening. All that changed yesterday, when they started installing…something. I really don’t know what it is. I don’t think this is insulation, but something that goes under that. But I’m not sure, and I haven’t run into the contractor lately to ask him. 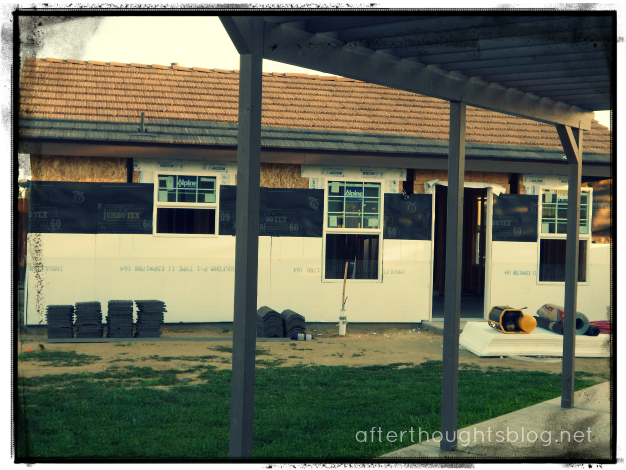 And that is all for this Friday. I hope you all have a wonderful weekend!

Helping Your Children Become More Independent: On Motives and Accountability

Learning how to Live