It’s the first REAL week of summer for us because E-Age-Twelve finished AO Year 6 on Friday. I had finished up with the girls the week before that, but it’s not real summer until we’re all having summer, dontcha think?

This week is the first of two weeks of swimming lessons. This is an annual tradition, and I love kicking off summer this way. It is almost therapeutic for me. I end up spending almost two hours per day sitting in the sun {or partial sun}. I read. I tan. I watch my children swim. It feels gloriously indulgent after so much activity. We come home, I make lunch, and then we frivolously waste the rest of the day. I’ve taken naps. I’ve fallen asleep multiple times during Andrew Kern’s first Teaching from a State of Rest video {still haven’t made it through the whole thing}. It’s been great. It’s a perfect two-week session of rest before we hit Conference Season and all the pressure hits.

The first book I read was a book I ran across at our local used bookshop. I bought it on a whim because, as a child, I loved Madeline L’Engle’s Wrinkle in Time trilogy. I never realized what a prolific writer L’Engle was! Anyhow, I never read anything by her except the Most Famous Three, and so I wasn’t sure if everything she wrote was acceptable or not.

I read The Young Unicorns in two days. I haven’t read a book that quickly in a long time. But I had tiiiiime, plus it’s not like it was difficult reading. This is definitely a child’s book, and yet I remembered why I was so drawn to L’Engle as a child. If only I had known she had written more! I would definitely have liked this one.

I added The Young Unicorns to E-Age-Twelve’s Pile of Available Books. He loves it when I add things while he’s sleeping at night. He wakes up and there is something new. I think it feels a little like Christmas.

I didn’t realize until I was done that this book was part of a series, and not the first installment. It stands okay on its own, but I do plan to keep an eye out for the others now that I know.

After that, I moved on to something more grown up. I’ve had Longitude sitting on my To Read pile for at least a year.

Now, this is a fun book to read because I’ve already read Carry On, Mr. Bowditch. It’s filling in a lot of the blanks. I didn’t realize that finding longitude had been such a difficult thing before. I knew that Nat Bowditch made it easier, but so far I’ve realized that for centuries sailors were wrecking all over the place because finding longitude was all but impossible, making navigation was a Best Guess situation.

I’m pondering letting E-Age-Twelve read it once I’m done, if there’s no objectionable content {which there isn’t thus far}. All the science biographies we’ve been reading really capture his imagination.

I keep mentioning that I’ve been working on a few Top Secret Projects. Well, it’s true, and there is one that I can finally tell you about. It’s Karen’s Glass new book, Consider This! It’ll be coming out at the end of summer, we hope! I had the opportunity to help her a bit with the project along the way, and I can’t tell you how excited I am. Which is why I was thrilled to know that Cindy loves it, too.

For years, I’ve had to defend the idea that Charlotte Mason is a classicist — that a CM education is a classical education. So many people define classical education as ages and stages a la Dorothy Sayers’ fundraising speech that when I say this, I have to explain why I think that Mason is classical {they often don’t realize that Mason died before Sayers gave her speech and that focusing on the Trivium primarily as stages rather than arts is a very New idea}.

I’ve always wished that there was one book I could recommend. Poetic Knowledge is a very difficult read and Norms and Nobility, while also hard, is just plain expensive. Those aren’t the sorts of books you hand to a new homeschool mom, you know? But Karen’s book? This is the one we hand out. It is, in my opinion, the definitive CM book for our time. It’s just like Laurie Bestvater’s book on CM notebooking — the book you recommend to everyone, and keep going back to yourself. 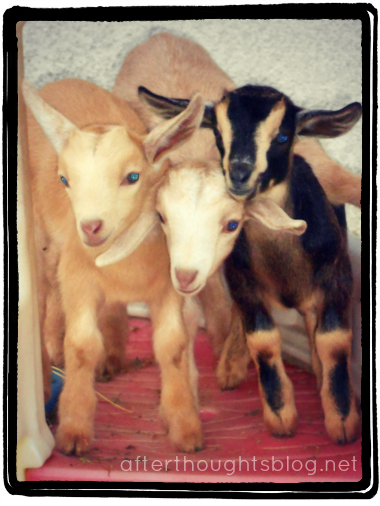 We sold the last of our baby goats for the season! I am always so excited when they are born…and I am always so ready for them to go when it’s time to sell. I get tired of the work load, not the babies themselves, and with two sets of triplets this year, it was like having six toddlers in my backyard — lots of fun, but where in the world were their parents and why didn’t they ever go home?

So now they are home.

We kept little Pepper {the black one} in hopes that she’ll be a good milker herself. We’ll see if she gets to stay. I’m working on my management because she’s fussy sometimes. She’s done better with more attention from me — specifically attention to her dietary rations. But I know Siah will ask me to sell her if she keeps carrying on. I found that while I can keep up well with my does and keep them healthy year round, six additional babies really put me over the edge. I really couldn’t keep up very well at all.

In other news, this translates into Tons of Milk. Yippee!

Other than this, I’m working on my conference talk. I’ve been studying up for it for almost a year now, and I’m almost ready to write it. And I suppose that is a good thing, since the conference is only four weeks away!

Secrets from Charlotte Mason on Scheduling for Peace

1. Ourselves 2. The Social Skills Guidebook 3. Nutrition and Physical Degeneration 4. What Jane Austen Ate and Charles Dickens Knew 5. Waverly 6. The Complete Father Brown Stories 7. The Lion and the Saint 8. Summer of Monkeys 9. The Ruins of Gorlan 10. The Boy Who Harnessed the Wind 11. The Burning Bridge 12. Northanger Abbey 13. The Icebound Land 14. The Lost Baron 15. The Baronet's Song 16. The Sea-Hawk 17. The Shepherd's Castle 18. Harry Potter and the Half-Blood Prince 19. The Boat Who Wouldn't Float 20. The Giver 21. Gathering Blue 22. Natural Born Heroes 23. Messenger

Um NO. 🤢 My daughter told me she needed new je

New episode out today and OH MY wasn't this one to

Prepping to speak at the @scholesisters online loc

"The art of the hero wasn't about being brave; it