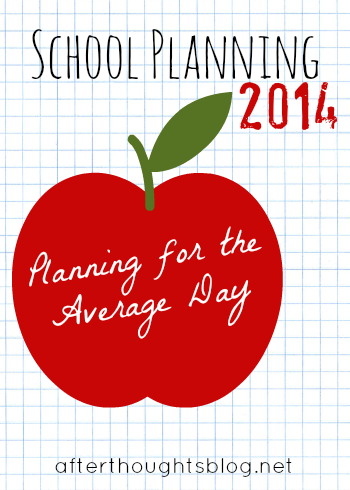 [dropcap]I[/dropcap] recently realized that our school start date is creeping up on me, so I’ve tried to resign myself to another painfully short summer’s end and commence with planning. I don’t want to procrastinate and then freak out due to lack of preparation. Today was a big triumph because I think I finalized my Average Day Chart. I say “think” because I always have this feeling that I’ve forgotten something.

Because I finally have all four children doing regular lessons — have I mentioned the weepy “Goodbye, Preschool” post that I meant to write, but didn’t?? — but I don’t want to school them for five million hours each day, I spent a lot of time staring at Nicole’s matrix.

Lest you think I am exaggerating, by “a lot,” I must clarify that I mean hours. I even typed up my own version so that I could move columns around to get a better view. Each time I add a student, I have to do a lot of thinking.

So I had various goals that are expressed in this chart. If I’m going to share my chart, I need to explain it, of course.

First, we have busy Tuesday afternoons most of the time. So there are certain things that do not happen on Tuesdays. They only needed to happen a few days a week anyhow, but instead of spreading them out to make all days even, I made Tuesday shorter in order to make room for an earlier lunch.

I’m also bringing everyone together for Swedish Drill in the middle of the morning. I think that’ll freshen everyone up for more studying. Some things that sometimes get lost in the shuffle, such as drawing lessons, now have a place on the schedule and I have high hopes that we will be more consistent.

One of the big things I’m unsure about is attempting an AO Time with both my girls at once. I don’t know that it will work, but I’m going to try it because it worked for us last year. The alternative — spending completely individual time — would extend the school day more than I am comfortable with.

The reason I don’t have our afternoons in the chart is because I plan those more from day to day and week to week — there is no average day, though there is certainly an average month. We have days where we do grocery shopping and days when we have 4-H meetings. There are days that we stay home and the older two are required to do a half hour of free reading and a half hour of piano practice. There are days when my dad comes and picks some or all of them up and they play at his house for the afternoon.

What else can I tell you? I suppose if you are new around here, you need to know that it says “milk” because I have goats to milk in the morning. I often do it earlier than it says on the chart, but this is the latest it can happen and still have all the rest on time.

My kindergartner will only have half an hour of individual lessons. This is when we’ll do our phonics and also MEP’s reception year. He’ll also be present for most of Circle Time, for drill and drawing lessons, for handicrafts. It should give him a full day, without going overboard. Later in the year, I plan to add in some Aesop to do formal narration training, but for now just having him try to “remember one thing” will work during Circle Time.

For drawing lessons, I’m starting off with the beginning lessons from Donna Young. I used to make these myself back when E-Age-Twelve was a little guy; it is waaaay easier to just print them out. This will cover at least a few weeks, and then I’ll probably give lessons from Draw Write Now, because we already own a couple books from the series, and we’ve had success with it already. Truly, I think the regular drawing will help more than any particular exercise. The lesson plans just make sure it actually happens.

Writing my post Extras are Riches really convicted me that I need to make sure I am spreading the full feast. In my upcoming Circle Time post, you’ll see the influence there as well. There are only four days on the chart because I’m planning a sort of Enrichment Friday. It’s something I suggested in my post, and it’s what we’re trying this year. We’re not in a co-op for the first time in ages, but I decided that I still prefer that rhythm. On Friday, I’m toying with some of the things missing here: Plutarch, Shakespeare, Picture Study, Composer Study, Dictation, and Nature Study. I don’t have an official schedule for it yet, but they are all contenders. I always have trouble with Fridays, so mixing it up will be good for all of us.

I haven’t chosen a handicraft yet. It is my big weakness and I always avoid this until the last minute. Sometimes it never happens. However, I’m trying to focus on riches: riches! When E-Age-Twelve was around this year, we did knot tying. I’m thinking about doing it again, and also teaching the girls to braid.

Now that my average day chart is done, and I have a template {based on Nicole’s matrix} for each day of the week, I can start plugging in reading assignments and see what it looks like. I did a sample first week, and it all came out okay. At least, I think it did. I’m still experimenting. What is always shocking to me is how much science reading Miss Mason had them doing in the upper years; you don’t really get that sense from reading her works, but from the time tables and programmes, you definitely do. It’s an interesting thing, really.

I’ll touch more on planning next week … I’ll be steeped in it, that’s for sure! Anyone else plan at the end of summer like I do? 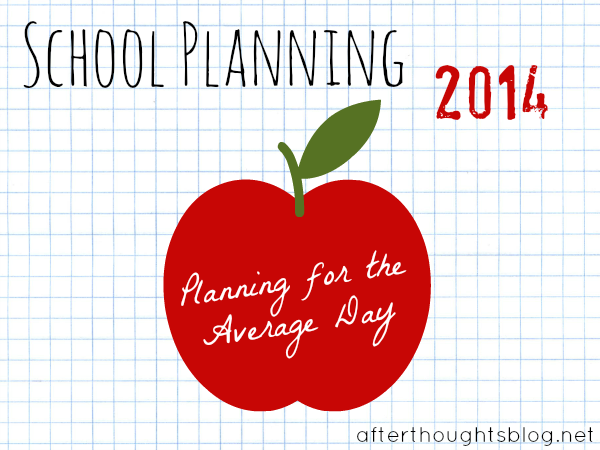