Let’s start off with humor, shall we? This is from the Afterthoughts Facebook page: 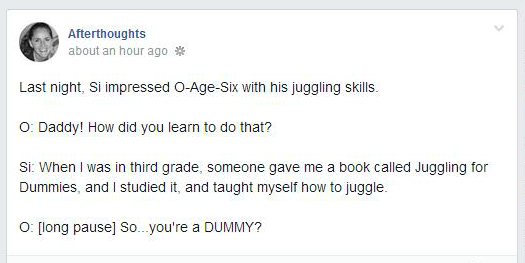 So now you see what you’re missing out on if you haven’t like my page yet.

Speaking of Facebook, something else you might be missing out on is the almost-nightly conversation about dinner. Here’s a good example. I don’t know about you, but talking about what I’m cooking {or not cooking} is something I always feel like doing at about 5pm each evening. This may or may not be a form of procrastination. I’m undecided on that aspect of it, but either way the conversation makes me hungry every. single. time.

I’m creating a Gift Guide for all you classical, Charlotte Mason mamas out there. I’m having a blast putting it all together. Think of it as a helpful hint link that can be sent to husbands and other clueless relatives. Plus, it’s fun to read through in its own right. In fact, I hope to have it out next week!

Last week, I did a watercolor tutorial with the children. This is one of those things I’ve been putting off all term, and for no good reason. I’m just resistant on the inside, you know. But it ended up being really enjoyable, and I’m pretty convinced that painting gets more fun as you figure out what you’re doing, and the only way to do that is to do it more often.

As I find tutorials I think might work — for the children, or even just for myself — I pin them to my Fine Art Pinterest board here:

Fine Art {Lessons, Tutorials, Etc.}
See that second one? The one with what looks like the start of a nice blue sky? That’s the one we did last Friday.

In other news, I’ve spent a lot of time lately pondering the idea that Story is True, even when it isn’t factual. My children plague me by constantly asking, “Is this story true?” I’m always so torn. What they are really asking is whether it is fiction or non-fiction, but I get frustrated. I want to tell them that it is truer than many things that are factual, but I don’t know how to explain it. I’m hoping this book {at right} will help me. So far, I’m enjoying it, but it feels more like a memoir than I expected.

I recently introduced the idea of facts to Q-Age-Seven, thinking it would help. She asked if a story was true, and so I said, “Do you mean is it factual? Facts are things that happened in history. Some stories are true in the sense that they teach you something true, but they aren’t factual — the things in the story didn’t actually happen.

I thought that maybe this would help, but now she constantly asks, “Mommy? Is that facts?” and it really isn’t much better.

I’m a fan of fairy tales, and I think you all are aware of this fact. But I’m also aware that fairy tales were originally for adults, not children. Have you heard about the new translation of Grimm’s? Um. What to say?

It’s true to the original. And by original, I mean the first editions of the Grimm stories, before they wrote them in a way that appealed more to the middle class family. That, according to this article in the Guardian.

And while it is something I might enjoy reading myself, out of curiosity if nothing else, I don’t think I’d read it to children.

Rapunzel having a “merry time” with her prince which is shortly followed by her clothes growing tight? Not exactly fare for my little daughters, I don’t think.

I’ve put my favorite goat, Charlotte, up for sale. This has been a long time coming. I’m sad to have to do it, but it’s necessary. She’s just cranky and noisy and if we lived out in the country, that wouldn’t be a big deal. But we live in a neighborhood. And Charlotte is not a good neighbor, especially since we added a buck, whose mere presence seems to distress her to no end. I feel incredibly guilty selling her because I know she’s attached to me. I bought her when she was only a few months old, and I’ve had her for years.

In preparation for this, we kept what we thought was the most appropriate baby from last year’s kidding. Her name is Pepper, and she’s a cute little thing. I think she’ll be a fine replacement, and she has a quiet voice, and she’s very sweet. We’ve bred her, and she’ll kid in the spring, so we won’t even be down a doe for milking.

But Charlotte? I’m going to miss her.

And that’s it for this week. Have a great weekend, everyone!

Disciplines of a Reader