Teaching our Children the Way of the Reason

Sometimes a child should be taken into the psychology of crime,
and he will see that reason brings infallible proofs
of the rightness of the criminal act.
–Charlotte Mason, A Philosophy of Education, p. 142

[dropcap]T[/dropcap]eaching children The Way of the Reason is one of the more difficult aspects of a Charlotte Mason education, I think, because it’s a lot less obvious than, say, finding the perimeter of a triangle. And yet, Miss Mason included this in her 20 Principles, the 20 indispensable aspects of her philosophy.

In doing research for my 20 Principles ebook study guide, Start Here, I realized that this was something I hadn’t covered in quite a while. 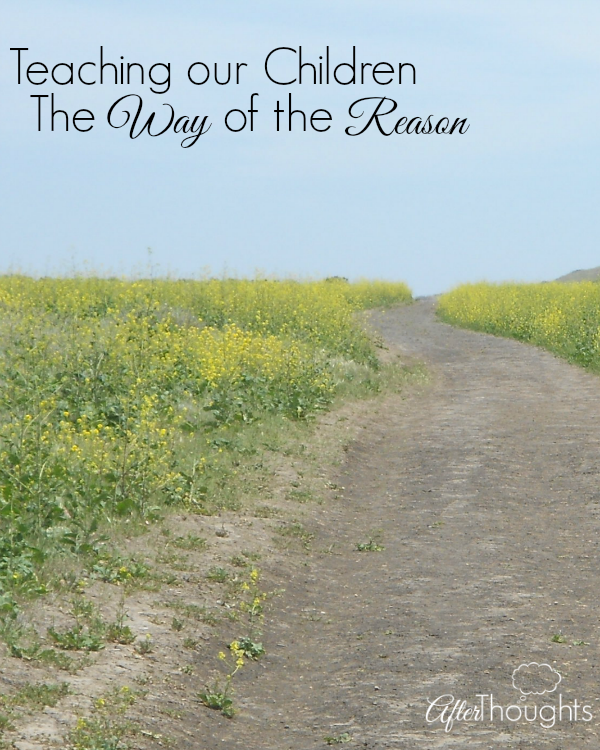 When the girls were younger, they used to freak themselves out at night. One of them would feed the other a scary idea, and before I was even ready to tuck them in, they were already both terrified. They were probably about four and six at the time, and that was plenty old enough to start taking responsibility for their own thoughts.

Miss Mason tells us that the key to self-control of mind is to learn to divert the train of our own thoughts. This is the mental equivalent of fleeing from evil, I suppose. How many of us are slaves to our thoughts? This is a great gift to give our children — even giving them the idea that the mind and thoughts can be controlled is a powerful thing.

Because they were so young, we assigned them other things to think about. For my princess-loving four-year-old, I usually told her to write me a story in her mind about a princess, and tell it to me in the morning. My nature-loving six-year-old had to compose a story, too, but hers needed to be about frogs and grasshoppers {two of her favorite things}.

As the months went on and we were still working on breaking this habit, I tried to empower them to change their own thoughts. Instead of an assignment, I would tell them, “Change your thoughts! Think about something else.” In moments of complete weakness, my older daughter would beg, right when I walked in the room, “Mommy, Mommy, please give me something to think about.”

And I would, of course.

So the girls learned to control their morbid nighttime imaginings, and all was well.

Years have now gone by, and more lessons like these haven’t arisen.

That is, until recently. We were reading through Lloyd Alexander’s book The Remarkable Journey of Prince Jen. To make a long story shorter, Prince Jen’s servant and defender, Li Kwang, is alone, repairing a saddle that is meant as a gift for a monarch, and he’s terribly tempted to use it himself. Like Eve in the Garden, he sees that it is a delight to the eye, and he imagines how wonderful it’d be to use.

His train of thought — the mental train of temptation — is out of the station immediately. He begins to think, and each thought ponders the use of the saddle. He thinks about how the saddle is old and has been ridden by many, so surely not all riders have been kings — what would one more rider matter? But this thought was not compelling enough. And so his mind produces another thought: likely the old king has many wonderful saddles, none of which he’ll ever use, and the thing will simply be locked away in a treasure house. But even this thought was not compelling enough. Finally, he finds a thought that will justify himself:

One thing troubles me,” Li Kwan said. “Suppose Yuan-ming does not store it away but makes use of it. How can I be sure it is well mended? How do I know the repairs will hold?

“Suppose, for example,” Li Kwang went on, “Yuan-ming rides to the hunt. What if the saddle gives way and he falls? If he falls, he might break a limb, or even be killed. That would be my fault.”

Right before this thought, though, something interesting is said:

He turned away, hoping that Prince Jen would soon come back so they could set off again and Li Kwang could rid his mind of tempting thoughts.

Li Kwang gives in to temptation, and at the end of the chapter, we find that this magical saddle has whisked him, along with Prince Jen’s entire protecting army, off into the heart of a mountain, and Li Kwang himself has been turned to stone.

Li Kwang, you see, has been imprisoned by his own sin.

This is, I realized, the perfect chapter for teaching the concepts Charlotte Mason outlines.

After our reading of this chapter, the children and I discussed it. I asked them what Li Kwang’s mind did when he was tempted. Together, they were eventually able to discern that his mind sought to justify the sin he wanted to commit. I read once again of Li Kwang’s desire to be rid of tempting thoughts. We discussed how he was looking for an outside source to do that for him.

Can you change your own thoughts?

Opinions at the table were mixed, but when we brainstormed ways to change our own thoughts when we are tempted, examples abounded. “What could Li Kwang have done to change his own thoughts?” I asked. A-Age-Nine suggested that a horse ride might have helped.

We talked about all sorts of things, among them Joseph, fleeing from temptation in Potiphar’s house. And then we touched on probably the most important truth of the day: we cannot think about two things at once. This is why diversion is so powerful. If we think about something else, by definition we stop thinking about the thing we’re tempted by.

I know they’ll need to hear this lesson again and again. As they get older, they’ll be tempted by more than scary thoughts in the dark. They say the best defense is a good offense, and that’s where these sorts of conversations come into play. 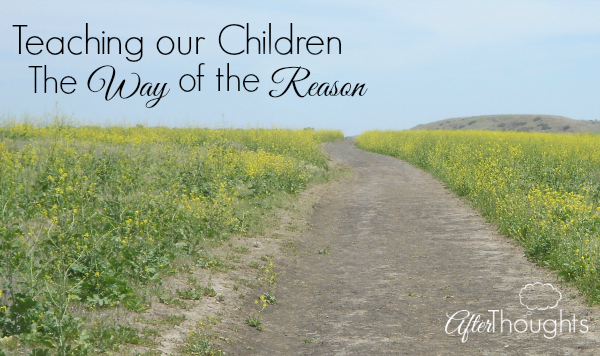