Notebooking: How to Actually Get It Done

[dropcap]I[/dropcap]’m going to divide this into three categories. First, we’ve got Mom. I’m keeping the Big Three, and I know that many of you want to keep the Big Three (or already are keeping them). So I’ll explain what I do, and give a few tips. Next, we’ll talk about younger students. If you recall, notebooking in a Charlotte Mason education starts off with only the nature notebook. The other notebooks are added as time goes on. Which brings us to Big Kids. Once you have a child old enough to do the Big Three (and possibly more than that!), how do you make sure it happens? We’ll cover that, too. 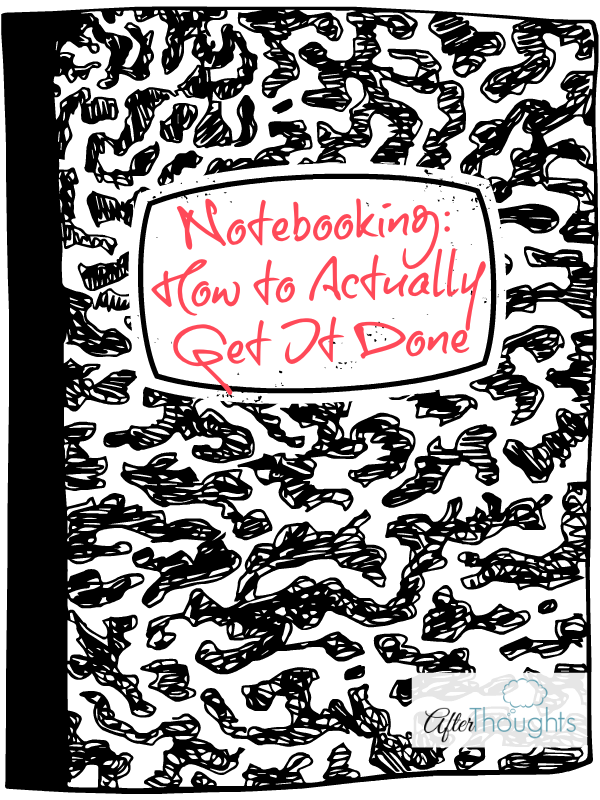 A good reason to start with Mom is because modeling the notebooks really helps. One of the things I love about a classical, Charlotte Mason education is that we’re never asking our students to do things that aren’t inherently worthwhile for people in general. This is, for example, why Charlotte Mason insisted on handicrafts instead of regular crafts. It isn’t, I don’t think, that the CM Police were going to swoop down upon any child who dared to make something crafty yet useless, but rather that lesson time always had real value. It’s that belief in the personhood of children shining through.

You are persons, we say to our children, and therefore I’m not asking you to do something that I wouldn’t do myself.

Miss Mason believed these sorts of notebooks were a lifelong endeavor. They weren’t just for children, which is why she had her students at the teaching college start them, and expected them to continue them after graduation.

I don’t (personally) know anyone with notebook-resistant children who is modeling the notebooks. I’m not saying that modeling is your magic ticket out of resistance, but it does seem to help, and not just a little bit — a whole big bunch. I think it’s especially effective when Mom is doing it before the children are old enough. Then, as they grow up, they are invited to join in this adult activity, which makes it more special than if the notebooks are viewed as a schooly something-or-other only for children.

When it comes to actually doing it, then, the Just Do It advice applies. Each of us has to figure out how that works into our own lives. For me, I have regular times of study set aside for the purpose of pre-reading the Year Seven materials. Each week, I read what my son will need to read the next week. I’m always only one week ahead of him. While I’m studying, I have my notebooks and pens by me. I stop to copy a quote or make a note in my Book of Centuries. I had to be deliberate at first, but now it’s a habit.

I have a friend who mentioned using Post-It flags to mark quotes she wanted to copy, and then setting aside a commonplace book time later on, even on another day. This works, too, which is why I said that, in the end, we each have to figure out our own system.

One of our favorite places to go is our local almost-zoo. It’s sort of a combination of animal rescue and zoo. It’s not very wild, but we’ve really gotten to know our native species through our regular visits. And we don’t just see them in the cages. There are a lot of them volunteering to live wild upon the grounds! A second place we go is a local park where we can walk along (and even in) a dry riverbed (drought in California, remember). We basically alternate between these two places, only adding other places in on occasion.

The children all know that one of our goals is to make an entry, and now that this is a habit, they are on the lookout for something interesting that they want to mark down. We’ve done a lot of the mammals at the zoo, of course, but we’ve also spent time studying the lowly jimson weed. Everything is fair game. So we walk around with our eyes open, looking for something. The children take turns choosing, except on the rare occasions when I’ve pre-planned a study.

So really, the important thing is to make sure that there is time set aside during the scheduled nature study for making entries. If, for some reason, you feel that you can’t do that, you can do what Celeste often does and bring samples home and make entries in the afternoon (and if you haven’t subscribed to Celeste’s blog, I highly recommend it).

In fourth grade, or around age ten, when the Book of Centuries is started, I suggest doing it with your student at first. Some students will take to a BoC like a duck to water, but some need help. My second child needs help, and we’re starting one soon as she’s turning ten in a couple months. My plan with her is to help her do entries following some of her history readings. Together we’ll identify dates of events, figure out what square to put them in, and what to write (because the small space can overwhelm a writing-resistant child). I’ll have my BoC there, too, and make the same entry, so that the modeling is readily available. She’ll do more and more of it on her own as she gets comfortable.

My personal opinion is that having the Book of Centuries entry incorporated into the history reading and narrating process is the best way to make sure it gets done.

My oldest child is in Year Seven and does all of his notebooking on his own. A question that has come up is how I make sure that it happens. There are two aspects to this: assigning the entries and holding the student accountable. This is the underlying principle. So, I’ll tell you how I work these principles out in my home, as long as we all agree that this is not the only way to do it. The principles are important; the practices may vary.

I assign the entries on my student’s weekly spreadsheet. This sheet contains all of his assignments, and then has boxes to be checked, one for each entry in each notebook that I expect. Right now, I ask for one commonplace entry per day, one nature journal entry per week, three Book of Century entries per week, and also two entries in his science and math journals (which I’m not getting into in this series, because I’m trying to stay focused on the Big Three, which are the most important). It looks like this:

So this is how the assignment is made. I suppose it could be said that he keeps himself accountable using this list, because this is how he keeps track of what he has or hasn’t done. This is not, however, how I hold him accountable. That is a much more organic process.

Some people schedule meetings where they go over their child’s work all at once, but I have never been able to make that happen. If I scheduled a weekly meeting, that would be the first thing to go every single time I was crunched for time, felt busy, or had something more interesting to do. This is a sad commentary on me, but also true.

What works for me is to incorporate this into our regular way of doing lessons. So, for example, let’s say my son reads a literature selection. During his reading, he finds something he wants to copy into his commonplace. Great! He does this. After he’s completed his reading (and his entry), he comes to me to narrate. After he finishes his narration, he shows me his commonplace entry. It’s just part of the process.

The same goes for the Book of Centuries. When he does an entry, he brings the BoC with him when he comes to narrate, and shows me his entry after his narration.

What’s especially fun about studying alongside him is that I show him my entries, too, and we sometimes laugh that we chose the same quote or date to mark down.

The nature journal is still something we do as a group because it is part of our nature study outings, so that takes care of itself.

In our house, then, assigning is done using the spreadsheet, while accountability is done as a follow-up to narration. I’m sure there are many ways to do it, but this is how I actually get it done.

Whatever you decide to do, it might feel big at first. All I can say is that Miss Mason was right that once something becomes a habit, it is really second nature, which means it isn’t that big of a deal. I put off nature journals for years because I had so many mental struggles about it, and yet now it is totally automatic. Or should I say automagic?? Considering how far we’ve come in that area, it certainly feels like magic.

So, like all habits, it is best to form these one at a time. If your child begins a Charlotte Mason education, that happens naturally, with a few years to focus on one notebook before adding a new one. If you came to this type of education later, I still think that it would be good to add one and wait a few months before adding another.

What is your biggest struggle in getting the notebooks done?