Today is the last day to take my survey, if you haven’t already. Please do! Not only are you entered to win an out-of-print AO title, but you are helping me out.

Speaking of the survey, some of you are begging me to bring back the old format of full posts on the main page. I explained this on Facebook, and thought I’d paste that explanation here, for those of you who missed it:

I’m starting a bullet journal to manage this blog. During this crazy move to WordPress, I was doing what I always do in a major project: writing lists all over the place and promptly losing them.

I don’t think I would want to use a bullet journal for my whole life. I have a simple daily planner that I love, and this year I made sure I bought one big enough to keep all my daily task lists right inside the spot for the day I need do them on. This means I’m losing fewer lists while still enjoying the pre-printed nature of the calendar.

But my blog’s organization has been unwieldy before, and this is how I’m reigning it back in. I’m hemorrhaging time through my disorganization and we’re supposed to be back at lessons next week, meaning I won’t have the time if I lose it all in mismanagement.

Anyhow, my real purpose was to brag about the pretty Moleskin journal {see Exhibit A} I bought for this purpose. I’m in love.

I’ve got a new project in the works and I plan to be ready to tell you all about it next week on Tuesday.

How was your Christmas? My husband’s twin brought his whole family {wife + 4 daughters ages 7 all the way down to 9 months} as planned, and it was glorious. Truly. I was convinced beforehand that it would be fun, and it totally met my expectations. We even threw in an unplanned trip to Pismo Beach to see the wintering monarch butterflies and eat the best fish and chips in the world.

Five of our girls {all but the baby} enjoyed sharing a room for a week. A-Age-Nine {a born introvert, if there ever was one} informed me that this was not as bad as she thought it would be. O-Age-Six showed that it really is damaging to be the family baby. Apparently, he’s never really had to share with someone younger than him. But other than that, the children got along swimmingly.

We were sad to see them go.

Q-Age-Seven became Q-Age-Eight on New Year’s Eve. I’m trying not to write one of my weepy, sentimental birthday posts, but seriously, how is my littlest girl eight? It’s a bit hard to fathom. All these children growing up all over the place. It’s enough to overwhelm, if I think about it too much.

Anyhow, Daughter Q. and I did our traditional Pinterest hunt for cake ideas. As usual, I had to explain that I don’t know how to work with fondant. It’s a Thing right now, I’ve noticed. Anyhow, she fell in loved with a christening cake. I tried to explain what the cake was really for, but she didn’t care. She wanted a beautiful Cross on her cake, yes she did.

And so she had one: 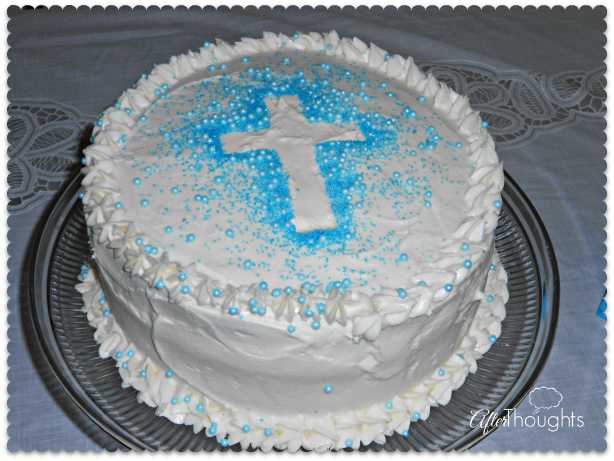 To make the white space, I simply made a cross in Microsoft Word that was the size I wanted, printed it on cardstock, and cut it out. I put it gently on the frosting and did all the sprinkles around it and then tried my best to take it off without messing anything up. I’ve never done a negative-space style before, so the fact that only a few sprinkles got into the space is something I consider a victory.

In my gift guide, I mentioned that sometimes, it is good to give a classical, CM mom an experience. I called it Mother Play. My husband took me at my word. He had talked about getting me a gift that was more expensive than usual, and even explained that if he bought it, it’d be my only gift.

Except for the obligatory socks-in-my-stocking, of course.

I encouraged him out of curiosity. Now, all I can say is WOW. I’m going to see Shen Yun!!

5000 years of Chinese history and culture in one night? Yes, please.