[dropcap]O[/dropcap]ne thing that impresses me about the Charlotte Mason approach to homeschooling is the emphasis on observation.  The AmblesideOnline article entitled What Is CM? states that:

Based on Miss Mason’s writings, a CM education would include… Nature study with an emphasis on close, focused observation of creation as a means to knowledge of God, and Outdoor life is necessary to teach nature first-hand, which means plenty of time spent out of doors each day in all weather and in different environments for students of all ages. “School” for children younger than six consisted almost entirely of time spent outdoors. 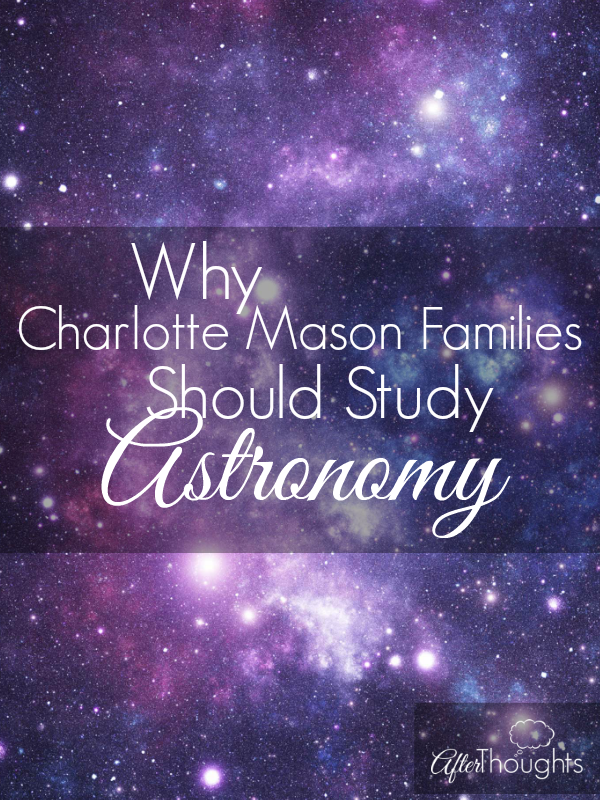 In my opinion, observation is the true heart of all education. Indeed, education is most effective when it arises from a natural curiosity, an innate desire on the part of the student to know and understand. This is especially true of science education, which is, after all, nothing more than the close, methodical observation of God’s natural world.

It can be truly said that the great scientists of history were curious individuals, and their desire to know and understand impelled them into careers in science. Albert Einstein is quoted as saying,

I have no special talent. I am only passionately curious.

There is no better way to instill curiosity in a child than to teach them to observe their world, as Charlotte Mason instructed. It is important for children to discover their world, to study rocks and watch animal behavior, and identify indigenous plants. But it is also important to observe the celestial bodies, and the amazing visually-apprehended cycles of Classical Astronomy. Indeed, our modern educational system does not teach astronomy as an outdoor activity.

Instead of learning the wonderful things there are to observe in the sky, modern astronomy education is an indoor activity, confined to books and videos, dwelling on mere factoids gleaned from science, such as the sizes and distances of planets, the temperature of the Sun, and the exotic properties of oddball objects such as black holes — but with no observational methodology. Meanwhile, a wonderful outdoor education can be found in the sky, if we lift our gaze above eye level.

There are many things we can learn from a methodical study of the heavens. In fact, Classical Astronomy was the first empirical science in the modern sense of the word. Since antiquity, geometrical techniques have been used to measure the cycles of the Sun, Moon and stars.

It is no accident that the physics of Isaac Newton grew out of Classical Astronomy, and from there, the entire realm of modern science. As a matter of fact, the ancients were keen observers of nature. Without the benefit of modern technology, they had only their eyes and their wits to rely upon for understanding their world.

For example, Pliny the Elder, in his Natural History, records numerous observations of nature, including the heavens. The Greek geometer Euclid wrote an entire treatise on applying geometry to the sky. Using such geometrical techniques, the Greeks were able to prove that the Earth was round, that the seasons would be reversed in the southern hemisphere, and that daylight would last for six months at the poles … millennia before these facts were actually observed by modern explorers.

Homeschool families can follow in this ancient tradition of observing the sky. There are lots of things that can be observed in the sky, without a telescope or other special equipment. These observations can be notebooked over the days and months, and can help fire your kids’ youthful curiousity to learn and understand.

Here’s a short list of things that can be observed in the sky:

Additionally, we can also begin to learn about the constellations at night.  This can be challenging, especially for those living under the bright glare of the city lights, which dims the stars, making them less visible. But with regular, consistent, dedicated observations, over a period of weeks and months, we can learn to spot the brighter stars, and identify the more conspicuous constellations.

Everyone knows the Big Dipper! Parents can start by teaching that to their kids, how the Big Dipper points to the North Star. Notice how, over the span of hours, the Big Dipper moves across the sky, circling the North Star, in response to the rotation of the Earth. Look across the North Star to learn Cassiopeia, which appears in the sky as a big “W.” Starting with these two star patterns, a family can easily learn 20 or 30 constellations. And after learning constellations, learn how to identify the planets. Venus and Jupiter are the brightest “stars” in the sky, and can be easily picked out by an experienced observer of the sky. Mars and Saturn are also easy to see, and can be learned upon gaining experience with the sky. Notice each month as the Moon passes these planets, a beautiful sight in the evening sky.

Parents wishing to begin learning astronomy with their little kids can read our Signs & Seasons curriculum. Many adults have enjoyed this as an introductory text, and have used with their little kids. Studying the sky can be a rewarding blessing, as homeschool families discover the wonders that the LORD has hidden in plain sight, and how “the heavens declare the glory of God.” (Psalm 19:1).