[dropcap]C[/dropcap]hances are you saw Albert Einstein on a poster or T-shirt or came across his equation E = mc2 in a comic strip before ever meeting him in the classroom. Albert Einstein’s influence on modern-culture is pervasive yet even larger is the legacy he left in science, which lead Time magazine to name him their “Person of the Century.” Despite our familiarity with Einstein, how many of us today have even a basic understanding of his revolutionary ideas? 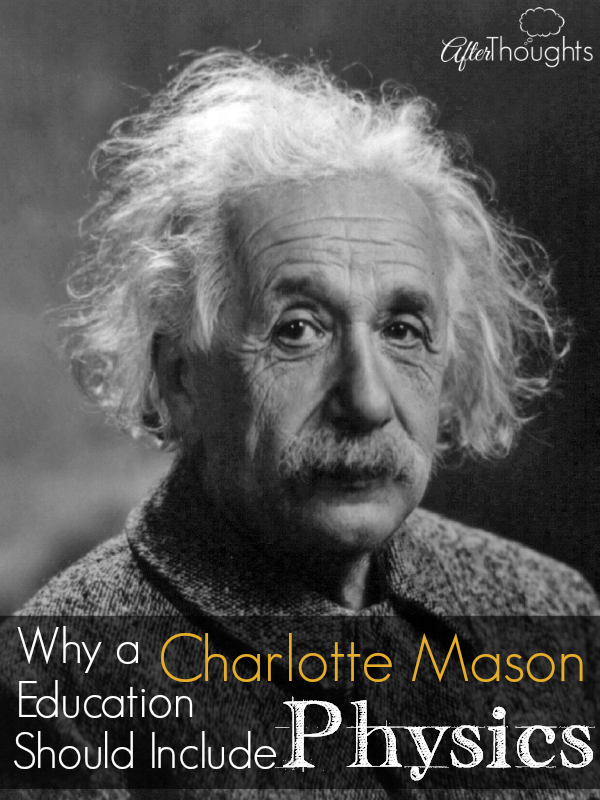 As a steadfast believer in Charlotte Mason’s philosophy of education I do my best to devise our syllabus following her principles and methods within the freedoms and constraints of our home. Realizing there might be questions regarding the legitimacy of undertaking a study of physics with children that young, I thought I would share some of the endeavors of Charlotte’s own students in the study of physics up to the time of her death in 1923. At this point, I’ll confine my discussion to Form II which is where my children fall — that’s approximately Years 4 through 6, ages 9-12 — though the principles and practices, unsurprisingly, followed through Charlotte’s Form V, our high school years.

Did Charlotte Mason’s students really study physics at such a young age?

Yes. In both Form IIA & IIB, Charlotte’s students studied physics. Following two terms of astronomy, one term was given to the study of solids, liquids and gases; another to sound, electricity and magnetism and during a third term students explored crystals before advancing to chemistry. This took place alongside the lower and upper classes’ respective studies of invertebrates in Form II. Students also maintained their nature notebooks and had special studies of the seasons during this time.

The distinguishing mark of Nature’s laws is their extreme simplicity. It may doubtless require intellect of a high order to make the discovery of these laws; yet, once evolved, they are within the capacity of a child, — in short, the principles of natural philosophy are the principles of common sense, and if taught in a simple and common-sense way, they will be speedily understood and eagerly attended to by children; and it will be found that with pupils of even from ten to twelve years of age much may be done towards forming habits of observation and inquiry. (Vol. 1, pp. 270-271)

Physics was not taught from a textbook but, along with the other branches of science, the basic principles were laid out in narrative form. The science books in Charlotte’s classrooms were thoughtfully chosen, of literary value, and not only aided in a child’s understanding of the world about them but also kindled their imagination. The books used in science were up-to-date and, just as in mathematics, the applications of science were often related to daily life.

Were experiments a part of the study of physics at this age?

Experiments aided in the exploration of physics and were also valued for nurturing habits such as observation and attention. If the book in use did not provide experiments, a book of experiments was suggested. Nothing seems to have changed regarding Charlotte’s thoughts in this area from the publication time of her first collected volume to her sixth. She tells us in Home Education regarding science:

One thing is to be borne in mind: nothing should be done without its due experiment. (Vol. 1, p. 271)

She then states in A Philosophy of Education:

The teacher affords direction, sympathy in studies, a vivifying word here and there, help in the making of experiments, etc., as well as the usual teaching in languages, experimental science and mathematics. (Vol. 6, p. 19)

What about the mathematics involved in physics? Didn’t Charlotte wait until her students had calculus or at least linear algebra before undertaking the study?

Having no formal training in algebra, geometry or calculus did not preclude a student from studying physics in her schools. Charlotte’s purpose was not to prepare children for a job but for a full life and she strove to ensure science did not become a utilitarian subject (Vol. 6, p. 223).

During the years of Form II when students began studies in astronomy, physics and chemistry the scope of their work in arithmetic included the four rules with harder compound addition, subtraction and multiplication using money; long division; and measures of area and volume. The upper years of Form II worked with decimals, factors and fractions, including percentages and simple interest. Students in Form IIA also had a weekly lesson in practical geometry where they learned to handle mathematical tools like the compass and protractor. Through practical exercises in drawing and measurement, students were guided to discover some of the foundational ideas regarding points, lines, circles and angles.

Students did meet with distances and measurements in their science books but problems were never outside their scope of understanding. The idea that mathematical calculations were important was alluded to in these books and they certainly threw the doors wide open to a desire for deeper knowledge and a further gaining of wisdom.

We’ve discussed classical physics but what about Albert Einstein’s theories and quantum physics?

Charlotte lived during what some consider the second scientific revolution. She was not shy about encouraging parents to be mindful of the latest scientific advancements or exploring them with her students:

If parents take no heed of the great thoughts which move their age, they cannot expect to retain influence over the minds of their children. If they fear and distrust the revelations of science, they introduce an element of distrust and discord into their children’s lives…if they realize that the new idea, however comprehensive, is not final nor all-inclusive, nor to be set in opposition with that personal knowledge of God which is the greatest knowledge, why, then, their children will grow up in that attitude of reverence for science, reverence for God and openness of mind which befits us for whom life is a probation and continual education. (Vol. 3, p. 160)

Charlotte felt that “the study of science should be pursued in an ordered sequence” (Vol. 3, p. 237), so I’m not suggesting that we just plop in a term of quantum physics. One of the wonderful things about Albert Einstein was that, through the habit of imagination, he reinterpreted already known scientific results to change the way we think about things like space and time, energy and matter. If your child has already explored motion and its laws, gravity, simple machines, heat, energy and light, then Einstein’s theories and some of their effects are a natural and exhilarating next step.

When first encountering relativity, what really struck me about it more than anything else was actually how incredibly simple the underlying ideas were. The big point wasn’t hidden in some minutiae of some deep mathematics, or these stunning, very striking assumptions — that the speed of light is constant and that physics looks the same in all frames of reference — and from these two seemingly innocuous assumptions come this incredibly different worldview than the standard Newtonian picture of the world. (Nima Arkani-Hamed, Theoretical Physicist)

From Jane Austen to Geometry, Richele is passionate about sharing how simple methods rest on profound, fundamental principles throughout Charlotte Mason’s philosophy of education. She is the author of Brush Drawing: A Basic Course, Mathematics: An Instrument for Living Teaching, and The Charlotte Mason Elementary Arithmetic Series. Richele manages the Math Resources page for Charlotte Mason Poetry. Richele's passion is sharing how simple, practical methods dovetail with a profound philosophy in a Charlotte Mason education. Out of her life as a student of Charlotte’s philosophy of education and a homeschool mom wanting children to experience the beauty and truth of math, the CM-handbook Mathematics, an Instrument for Living Teaching was born. A bibliophile, barn-lover and believer, she and her family harvest laughter and love on three acres in western Massachusetts.