Recently, I realized that my fourth grader is weak on geography. It’s not a big deal, at her age, but she’s weaker than I’d like her to be, and she’s also really resistant. I was trying to think of a simple way to get her more familiar with geography without causing a battle, so what I started doing was opening our history readings by using a globe. We’re using George Washington’s World for our history spine, and it jumps from place to place, and so naturally my concern was that she wasn’t visualizing how all of it went together. This has been like magic. She’s taken to the globe so much better than she has maps, and after a few days, she started helping me find some of the cities and countries, something that was like pulling teeth before.

Using a globe is a really simple — and possibly simplistic — way to integrate geography into our day, and it’s really working for us right now.

I’m not doing any Circle Time plans for Term 3. I’ve decided to continue with review, plus the pile of odds and ends I found in my “on deck” section of my binder {which I had forgotten about}. O-Age-Six has been really frustrated that he doesn’t know many of the songs the others know, so we’re focusing on him for a term. The older children are enjoying singing a bigger variety and revisiting old favorites.

With that said, I wanted to add something new. It helps liven up the last term, which is especially hard for us when Easter is so early in the year. I decided to add some commentary reading to our morning Bible time. We’re going to use Leviticus by Nancy Ganz because it was highly recommended by Jeanne, one of my favorite people. There is probably something wrong that I am starting with the third book in a series, but I’ve been wanting to read Leviticus with my children, and my hope is that this will keep us from drowning in the minutia. 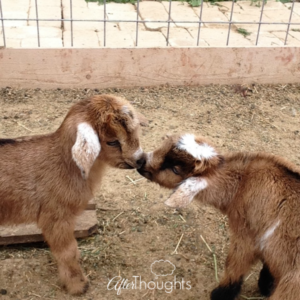 We welcomed twin goats to the microhomestead on Wednesday! One doe, one buck, and both waaaaaay cute.

The buck we named Socks due to his four black feet. He’s got beautiful blue eyes, and we’re hoping they stay that way. The doe we named Roxy.

I had been convinced their mama was going to have three or even four kids; she was so huge. It was a very difficult delivery. At birth, they were bigger than our one-week-old doeling, Snowdrop, and she’s grown quite a bit in a week! We are so thankful that mother and babies all survived.

Congratulations to Misty Newsome, winner of the Simplified Dinners for New Cooks giveaway! For the rest of you, keep in mind that our $5 discount code AFTERTHOUGHTS is good through Monday, March 23, 2015.

Some of you have been asking me about THM. Yes, I’m still doing it, and yes I’m still happy with it. I find it to be very doable in daily life, and then I just schedule in cheats so that when I go out, I don’t need to worry about it. Here I thought I’d share some of my favorite products:

And that’s about it. I’ve tried some of the other things out there, of course, but these are the only things I’m purchasing again and again. I tried noodles made from gluccomannan and they were just okay, and then later I had an aching tummy. Really, I prefer spaghetti squash or spiral sliced zucchini, and I think that is a lot more nutritious anyhow.

Get A Job: Raising Hard Workers in a Lazy World