Why Latin? More Thoughts on an Old Tongue.

[dropcap]A[/dropcap] little over two years ago, I wrote out my thoughts on why we study Latin. I’m not taking it all back, but my thoughts have been refined lately. In her book Consider This, Karen Glass gives some modern, utilitarian, pragmatic reasons for studying Latin. These reasons are not classical reasons for offering a component of classical education, and Karen tells us that a true classical education hinges not just upon offering the classical content, but actually having the right motives — on having the proper reasons why. 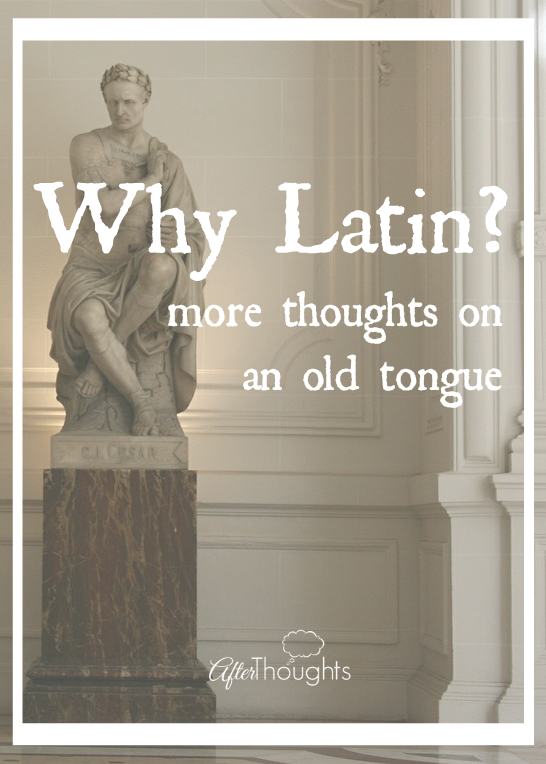 Some of the pragmatic reasons — the wrong reasons — she listed are found in my original post.

It is oh so easy to confuse side benefits with the actual reasons for doing things. Now, granted, sometimes the reason “Latin will improve test scores and vocabulary” is handy because the person we’re talking to is plagued by the modern obsession with utility. But in my case, if I remember correctly, these utilitarian reasons were just as valid as the ultimate reason of having access to great thoughts in the original tongue rather than via translation.

It’s sort of like saying that I homeschool so that my children can spend more time with their great grandparents and grandparents, or so we can go to the beach on a weekday. These things are possibilities — side benefits, if you will — but they aren’t good reasons for homeschooling.

Likewise, better grammar and thinking are real side benefits of Latin, but not the best reason for doing it. It’s a lot of work, to be honest, and these things really might be gotten in other, possibly easier, ways.

Charlotte Mason did not want Latin {or Greek} to be eliminated from the traditional curriculum, but being Charlotte, and much more concerned with the primary elements of the classical ideal, she was more interested in the content of what was read for the purpose of enlightening ideas than in developing vocabulary or thinking skills.

I haven’t yet read The Liberal Arts Tradition, but Mystie assures us that the authors come to the same conclusion as Glass: the purpose of studying Latin is to be able to read classical texts.

In a private discussion with the Scholé Sisters concerning why we study Latin, Mystie was quick to point out that if our goal is to read great thoughts, then our highest goal would be to read the Bible, while hoping all the other awesome Latin texts would be added unto us in time. {I used to say I was studying in order to read Athanasius — I was not aiming high enough.}

I was reminded of this when I read Dwane Thomas’ {author of Visual Latin} post Are we all penguins? I highly suggest you read the whole thing, but here’s a snippet:

Who decided that my 14 year old girls, in order to learn Latin, must read the writings of a man who could not stay married, committed adultery on multiple occasions, slaughtered an entire tribe as an example, and sold 50,000 people into slavery in one day?

This may come as a shock, but, “I reject Caesar!”

Caesar is what is done in the Latin classroom, right? But is it truly great? And the best use of our time?

{Yes, my children are required to refer to him as Mr. Thomas. Ahem.}

Soon, I’m going to be heading into planning season, and I’ll be posting specifics on what we’re doing this coming year for a lot of things, including Latin. For now, I’ll just say that this is what I have loved about Visual Latin since the very beginning. It was three or four years ago and I didn’t know what I was doing and Cindy Rollins said it was funny, so I bought it. I had the tiniest budget you could imagine, and so I was grateful they were selling one DVD at a time. I think I spent twelve dollars plus shipping.

There we were, doing our very first translation exercise, reading a part of Genesis. I still remember the very first Latin word I learned by heart: caelum. It means both heaven as well as sky, and I knew it because God created the heavens {caelum} and the earth.

All of this begs a question, I think. What do we do with the child that we think will never be able to translate? Or to read the original texts?

In Consider This, Glass implies that a child’s education can be fine without it, and yet I hesitate. The truth is, while I’m not that great at it {yet!}, I love Latin. While I think a child’s education can, theoretically, be wonderfully rich when done only in English, that isn’t really what I want for my children.

But I hesitate to commit a child to Latin when she might not get to the goal. And if she doesn’t get to the goal, will I look back and regret that I was wasting her time?

In Charlotte Mason’s 12th principle, we are told:

“Education is the Science of Relations”; that is, that a child has natural relations with a vast number of things and thoughts: so we train him upon physical exercises, nature lore, handicrafts, science and art, and upon many living books, for we know that our business is not to teach him all about anything, but to help him to make valid as many as may be of —

“Those first-born affinities
“That fit our new existence to existing things.”

It was in this conversation amongst friends that I realized this principle, one I hold so dear, held the answer to my dilemma. Did I really know when we started out that my oldest would take to Latin like a fish to water? That he would be so driven to understand it that he spent some of his free time on it?

I don’t really know what my children will grow an affection for. Affections are often surprising and unpredictable. But what I do know is that my job is to make valid as many of those first-born affinities as possible. My job, in other words, is to introduce and cultivate and woo and offer a taste of all that the world has to offer.

It’s a gift I can give to my children. Some of them might treat it like an ugly Christmas sweater, it’s true. They’ll only bring it out for a photo or a party. But some of them might see its worth, and who am I to decide in advance for them?

The Use and Misuse of Charlotte Mason’s First Principle

Seven Quick Takes on My Favorite Dinosaur, Field Trips on Mondays, and an Audio Download

The most amazing midlife crisis in the history of

The latest from @scholesisters! Go have a listen i