[dropcap]A[/dropcap]s discussed in my previous guest post, Charlotte Mason taught that education should include time spent outdoors, closely observing nature.  For most families, this typically includes studying plants and animals, but likely does not include methodical observations of the sky.  In our contemporary culture, astronomy is mostly ignored, treated as an optional topic of specialty interest, an “indoor” activity consisting of reading books about the solar system and outer space, with nothing to observe.  One does not often hear of any sort of astronomy study that includes methodical outdoor observation of the Sun, Moon, stars and planets, and their cycles. 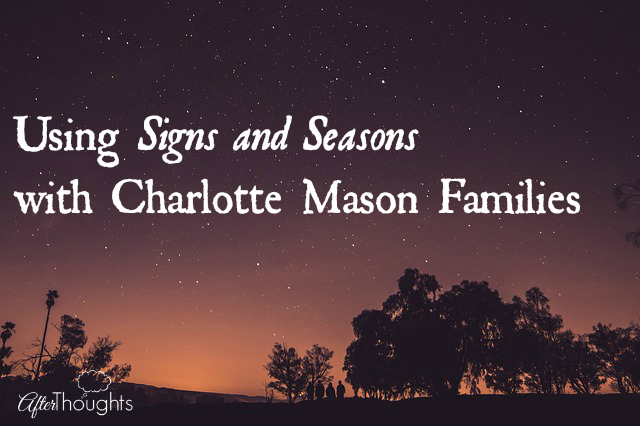 Growing up, I always fancied myself as an astronomy enthusiast.  I had read many astronomy books and watched all the PBS astronomy science programs on TV.  However, like everyone else today, I had no knowledge or experience with observing the sky.  I only knew a handful of constellations, such as the Big Dipper and Orion, which I learned as a kid.  Like everyone, I was mystified at the alleged constellations, how anyone could find such patterns in the stars.

I’d see the Moon and notice that sometimes it was a crescent and other times it was full, but had no idea that there was any order to these phases.  I also heard that there was such a thing as a “lunar calendar,” but had no idea what that entailed.  Like everyone, I noticed that the seasons changed, that the days would grow longer and shorter, but had no idea what that was all around, or that this might have been related to astronomy.  I also had never seen a planet, and believed that they could only be seen with fancy telescopes.

When I was nearly 30 years old, I discovered amateur astronomy, the hobby of owning and using a telescope.  I found out that I, like everyone, had labored under common misconceptions.  I found out that the planets were not only visible to the eye without a telescope, but were among the brightest “stars” in the sky, especially Jupiter and Venus.  I found out that there was a logical progression to the Moon’s phases, and that the lunar calendar was as simple as following that progression from night to night over the span of a month.  I discovered that the constellations were not really all that hard to find, as long as one applies some consistent effort in observing the sky.

Learning to observe the sky blessed my life tremendously.  There are many wonderful things going on above our heads every night of our lives.  I learned firsthand that the heavens declare the glory of God.  However, it saddened me that these glories went unnoticed by the majority of people in our modern culture.  My own path to learning the sky had difficulties, partly because there were no educational materials available to teach a novice where to begin and what to look for.  In 1990, I set out to research the subject, to create curriculum materials to help others learn the sky.

The fruit of that research is our homeschool curriculum, Signs & Seasons: Understanding the Elements of Classical Astronomy {S&S}.  It would be my hope that CM families would consider S&S to be a “living book” as Miss Mason described.  I was honored that AmblesideOnline has added S&S for Year 7.  In this way, I hope that CM families will use S&S to conduct their own methodical observations of the sky, and themselves learn firsthand how “the heavens declare the glory of God.”

The Prologue of S&S explains that the Sun, Moon and stars have been given by God for timekeeping, for maintaining a calendar.  The calendar tradition has flowed down through history, including the American astronomical almanacks, which were used by our ancestors for finding the times of planting and harvest.

Chapter 1 begins with the sunrise.  This chapter explains the daily motion of the Sun across the sky, and relates it to the rotation of the Earth.  The compass points are introduced, along with their relation to the Sun’s daily motion.

Chapter 2 discusses the nighttime and the constellations.  Some important foundational concepts are introduced, such as the spherical appearance of the sky, and useful circles that span the sky.

In Chapter 3, the cycle of the phases of the Moon are explained, including detailed instructions for spotting the Moon at various times of the day and night, and how to understand these sightings in terms of the Moon’s orbit around the Earth.

A particular band of constellations is introduced in Chapter 4, through which the Sun, Moon and planets appear to move.  These constellations are collectively known as the zodiac.  A detailed explanation is offered of the differences between astrology and astronomy, and how to draw a proper distinction.

Chapter 5 begins to tie together the concepts learned in previous chapters, and shows how the annual cycle of the Sun’s apparent motion through the zodiac is the cause for the changing seasons.

Chapter 7 gives detailed information about seeing the classical planets, explaining the various aspects of their cycles, and how to spot them in the sky.

The Epilogue of S&S discusses in detail the calendar, explaining its history and tying together all the concepts presented in the other chapters, to provide a complete understanding our how our system of telling the time of day, the day of the month, and the month of the year is based on the cycles of the Sun and Moon.

The entire purpose of S&S is to help the student become an observer of the sky.  The text is heavily illustrated, with over 400 images to help prepare the students for what they might expect to see while observing the sky.  In fact, the illustrations are part of the lesson, not just decorations, as in other curricula.  The companion field journal mainly includes pre-made tables for recording sky observations, to facilitate notebooking.  Though the S&S course can be done for high school credit, it is intended for students 13+.

The entirety of S&S is written from a Biblical perspective, and includes a description of the Hebrew lunar calendar, and also the astronomy for Passover and Easter.  The text includes Scripture verses throughout, and also quotations by historical writers from down through history.  In this way, it is hoped that the student will see how astronomy was once a well-known subject in centuries past.

We also offer a FREE email newsletter, to alert the readers to upcoming sky events.  You can sign up at our website, Classical Astronomy.  Be aware that there will be an amazing alignment of the bright planets Venus and Jupiter during the month of July, 2015.  These planets will be drawing closer throughout May and June, with their closest approach on July 1.  We will also be covering this and other happenings in the sky on our Facebook page.

I’m always happy to answer email and provide any help to homeschool families, so please drop me a line anytime.  Also, you can save money on the curriculum by ordering from Christianbook.com.  Whatever course you use, I hope that you will consider studying astronomy with your homeschool family.