AmblesideOnline Year 7 Living Science: Why We Loved It {A Curriculum Review}

[dropcap]I[/dropcap] feel weird doing this review because you all know we use AmblesideOnline and love it. But I’ve gotten a number of emails asking about the new science component in the upper years. Is it really okay to do science without a modern science textbook? That’s really the gist of it. So let’s talk. 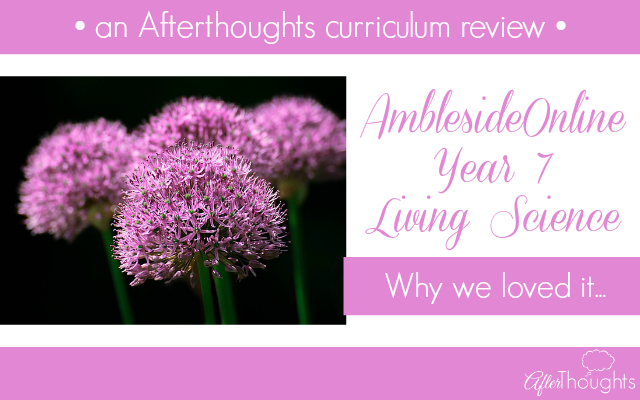 What Books We Used

You can see the complete list of AO’s Year 7 science curriculum here. We skipped Signs and Seasons because we had already done it {and loved it — you can read my thoughts on Signs and Seasons here}. I actually plan to revisit S&S this coming year, but I digress. Also, we didn’t get our hands on Adventures with a Microscope until late in the year, so that is something we’re implementing for Year 8. {Remember that Jeanne has written a guide to help us safely do what we need to do with Adventures with a Microscope, so make sure you download it from her sidebar.}

Other than that, we did the whole thing as written.

How it Fits with Our Philosophy

This is really important to me. Until now, there hasn’t been a Charlotte Mason style science curriculum for the upper years. In fact, that is the only reason why I’m doing this review — because this is New.

So, first, an important thing to remember is one of the main goals of a child’s education {for a 12-year-old is still very much a child}: to make affinities valid. Charlotte Mason wrote:

We take the child as we find him, a person with many healthy affinities and embryonic attachments, and we try to give him a chance to make the largest possible number of these attachments valid. {Vol. 3, p. 218}

My goal is not for my children to know a bunch of stuff. Knowing about a subject and being able to recall it naturally is a direct result of having an affinity for the subject. A child who knows a bunch of information about a subject but loves himself and showing off his knowledge rather than the subject has already developed that dreaded disease, hubris.

So. The number one question I’d ask about a science curriculum is, Did it develop the child’s love for something outside of himself? Since the idea that the goal of a Christian education is to order the child’s affections dates back at least to Augustine, this is not an unimportant question.

It’s also important to remember that any science learned by books is supposed to be in addition to the continuance of nature study, even in the upper grades. This is very hard for someone like me, who would much rather stay home and stick to the books. But Miss Mason was clear:

In this way they lay up that store of ‘common information’ which Huxley considered should precede science teaching; and, what is much more important, they learn to know and delight in natural objects as in the familiar faces of friends. {Vol. 3, p. 237}

This is why she later added that

all school children of whatever grade should have one half-day in the week, throughout the year, in the fields.

She is clear, though, that as the children get older, science is definitely learned through books, and she does not mean dull, dry textbooks. She means real books of a high literary quality.

Books dealing with science as with history, say, should be of a literary character, and we should probably be more scientific as a people if we scrapped all the text-books which swell publishers’ lists and nearly all the chalk expended so freely on our blackboards. The French mind has appreciated the fact that the approach to science as to other subjects should be more or less literary, that the principles which underlie science are at the same time so simple, so profound and so far-reaching that the due setting forth of these provokes what is almost an emotional response… {Vol. 6, p. 218}

If you have ever read anything by Jean Henri Fabre, you understand why she gives such credit to the French treatment of science.

Miss Mason’s goal was to give children

a wide syllabus introducing them … to those branches of science of which every normal person should have some knowledge… {Vol. 6, p. 222}

One thing to note here, then, is that, like Miss Mason, AO’s goal will never be to prepare a child to be a science major. There are special things that might need to be done for that purpose, and that is outside of the goals of a CM education, which is to afford the sort of working scientific knowledge “every normal person” should have.

Now, Miss Mason had a high view of what normal people should know and understand, but still I think it’s important to note this fact.

But to return to the heart of a Charlotte Mason education:

Where science does not teach a child to wonder and admire it has perhaps no educative value. {Vol. 6, p. 224}

Wonder indicates the sort of humility necessary for a Christian education, and it’s the number one reason why I doubt the average textbook. The attitude that here I am, a created being, sitting at the feet of the Creator and learning from His handiwork — this is imperative, the most important thing.

We needed to add in experiments — that is where we lacked. In fact, I’m arranging with a friend to do some of the experiments from Adventures with a Microscope this coming year because it’ll be more likely to happen if we’re committed to doing it with someone else.

But overall, it went great. I saw the growth in wonder in every area we studied, be it entomology, botany, meteorology, astronomy, or chemistry. My student’s obsession with his weather study caused him to ask for a barometer for Christmas {he got this one}, and now he tells me he needs his own copy of Eric Sloane’s Weather Book — he now predicts the local weather better than the app on my iPod.

We did some special studies based upon our reading in First Studies in Plant Life and recorded our observation in our nature journals.

One last thing that I really appreciate about AO’s approach to science in general is the inclusion of the history of science. Whenever I hear someone mention that the science about something is “settled,” I chuckle to myself and think about Galileo, someone I didn’t learn much about until I started reading the AO books. In reading the history of science, it is hard to escape the fact that while, yes, progress really is made, usually the idea that a science is settled is the number one deterrent to … more progress in science. If there is one thing I’ve learned, it’s that the idea that the science is settled closes the mind of every person who accepts that assumption.

Learning the history is also helpful because it helps us see the necessity of each discovery and development. Historical context is just as much a part of the process of science as is the mind of the scientist.

Do I Recommend It?

Absolutely. Without reservations. This is the sort of science I was waiting for.