[dropcap]I[/dropcap]f on Monday I shared something that worked really well for us, I suppose it is only fair to spend Wednesday sharing something that totally didn’t work for us. Now, as a disclaimer, it is only fair to say that the problem with this curriculum was likely me. I think this curriculum can do exactly what it’s intended to do. It’s just that ultimately I was trying to bend it to fit my philosophy, and I failed. 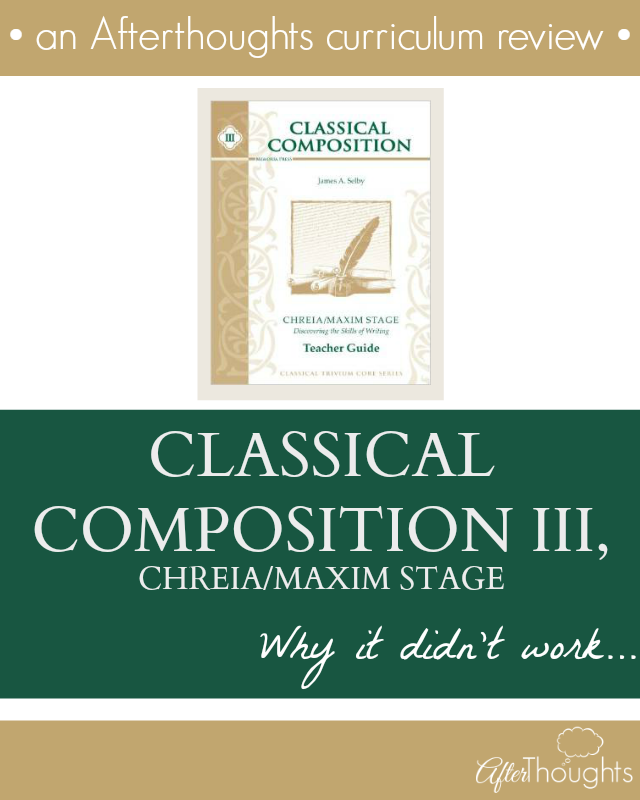 Most of you know that I did the first two levels of this curriculum with my oldest child a couple years ago — a modified, CM application of it, anyhow — with great success. Naturally, I thought the third level would work just as well. A couple of you {Jami comes to mind} tried to warn me, but I really thought I’d be able to modify it to fit a CM approach because that is what I’d done with the other two.

Let me back up a little, though. My first mistake was actually in scheduling two composition programs in one year. I didn’t see it that way at the time. I saw Grammar of Poetry as a poetry program. But actually, Grammar of Poetry had my student writing poetry quite often, and other times we would work what he learned into a written narration. For example, when we learned alliteration, he tried to cram as much of it into a narration as possible. Another time, metaphors. And so on.

So, really, even if I had thought this curriculum was fantastic and had chosen to continue it throughout the year, I would have been putting too much composition into our weekly schedule.

Why It Didn’t Work

Ultimately, this curriculum’s goal is to teach a basic, five-paragraph essay. The problem is that five-paragraph essays make me cringe, and I think that teaching it early in a student’s writing career is a sure way to create stilted, formulaic writing. So while in the fable and narrative stages, I was able to incorporate what we learned into our normal, written narrations {like we did with Grammar of Poetry as well}, it was impossible to get around the five-paragraph issues.

I ended up teaching my child what a maxim is, and a few other basics, and then we put it aside and focused entirely on Grammar of Poetry.

I think that if I had been a little more devoted to doing research on the progymnasmata, I might have been able to come up with some exercises of my own that utilized the selection of maxim {maxims??} in the workbook, and that might have made me feel like I had gotten my money’s worth.

A quick internet search tells me that in the chreia stage, students are to elaborate on a maxim {which is basically a short saying}. While I’m sure that the five-paragraph essay is a way of elaborating on a maxim, I have my doubts about said essays in the first place, and so I skipped it.

What We did Instead

You already know about Grammar of Poetry and my undying affection for it. In addition to this, at the end of the year, I also discovered a new YouTube channel called Field Notes for Writers. It’s by author Jonathan Rogers. The best narration I received this year was written shortly after E-Age-Thirteen watched Episode 1: Nouns and Verbs, Adjectives and Adverbs. It was a written narration of a chapter of The Once and Future King, and it felt like I was reading a chapter out of the Redwall series. It was seriously well done.

I also discovered that this was the sort of writing coaching my son was really craving. He wanted practical tips — one or two at a time — that he could try to incorporate into his narrations. So, I emailed him the videos every once in a while, and he enjoyed trying to implement what he learned. It was all very casual, while making a huge difference in his writing.

What the Future Holds

I’m not saying that we won’t revisit the progym. It’s lasted a couple thousand years for a reason. But this coming year we’re going to explore some of the Common Topics using The Lost Tools of Writing, and we’re really looking forward to it.

What curriculum totally bombed at your house this year?

Why I Love Grammar of Poetry {A Curriculum Review}

1. The Wright Brothers 2. Talk to Me 3. Alice in Wonderland 4. The Fiddler's Gun 5. Fiddler's Green 6. Utopia 7. Ourselves 8. Outlaws of Time: The Legend of Sam Miracle 9. Nutrition and Physical Degeneration 10. The Stars 11. The Social Skills Guidebook 12. Outlaws of Time: The Song of Glory and Ghost 13. Hard Times 14. The Last of the Lost Boys 15. The Lonesome Gods 16. Pride and Prejudice

In April, we lost one of our breeding bucks. It wa

Today, we learned that the California Department o

I bought myself a birthday gift. It just arrived (

Farmer O. is at it again. #11yearoldsareamazing #

Guess what’s in @commonplacequarterly this time?

Sunday scholé. 💗 Almost done with all of these