I’ve been thinking about habits this week. Newbie Tuesday had an issue devoted to habits, I’ve written a few posts about habits {such as here and here}, and I’ve found habits to be really powerful in my own life.

The advice I’ve given in the past might not work for everyone. Now, I knew that was the case, but I didn’t know any other place to point to as a resource. That has totally changed, people!

It all started when Gretchen Rubin did an amazing interview on one of my favorite podcasts, Underground Wellness. You can listen free to that episode, called How to Make New Habits Stick.

Shortly after this, I checked out Rubin’s new podcast, Happier. Turns out, it’s fantastic. If you’re at all interested in thinking more about habits, I highly recommend it. I love that each episode is short {less than half an hour} and starts off with a segment focused on one key good habit. Rubin co-hosts the podcast with her sister, and it’s amusing because they don’t let each other get away with anything.

Finally, there is Rubin’s book, Better Than Before. In this book, she goes beyond the mere power of good habits {which we already know about since we read Charlotte Mason, right?}, to discuss four basic personal tendencies that people have, and how understanding which tendency you have will help you form better strategies for building habits.

Here’s my basic thought on this: if you really want to form good habits, but you find that the typical advice just doesn’t work for you, this book might be just what to need to think outside the box of usual habit advice and work with the personality God gave you to form good habits.

Speaking of good habits, I have realized lately that accountability is even more motivating to me than I thought it was. A couple weeks ago, sweet Allison Burr from Truth + Beauty + Goodness sent me a surprise in the mail. It was a FitBit Flex for my very own! Now, I already had discovered that I really do walk more steps with my pedometer than without. But this thing has taken it to a whole new level.

I’m not very competitive, so I was shocked to find myself walking laps in my backyard after the kids were in bed because I knew I had to face Mystie’s superior step count when I checked our leaderboard. I’m reaching my step goals more often than I was before, all because I know other people can see whether I was lazy … or not. 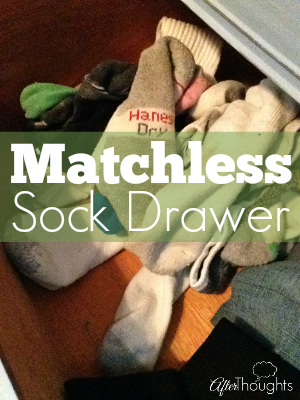 Three words: Matchless Sock Drawer. Truly, this has given me more sanity in the laundry area. After spending more than a decade getting frustrated by socks that have no match — at least not in the laundry load I just ran — I have a solution that is really working, and has been working for over a year now. Since it has worked so long, I think it’s a safe tip to share. I had half of a drawer that was empty in my room, so we designated it as the Matchless Sock Drawer. Everyone in the house now knows that if they have a clean sock, and they don’t know where the mate is, they are to put it in my special drawer.

Almost every time I fold laundry, I have a little pile of unmatched socks. I take them to my room. Sometimes I sort through, find pairs, and give them to whomever they belong to. Other times, I just add the new to the pile and figure I’ll deal with it later. O-Age-Six loves it when I hand him the new ones, and he runs to the drawer to see how many matches he can find.

Anyhow, it works. All the unmatched socks in one place means that many mates are found and returned to their rightful owners. If I notice a sock staying in the drawer too long … I toss it in the trash!

In honor of the upcoming tenth blogoversary of Afterthoughts {yes, I’m a dinosaur in the blogging world}, I’ve been highlighting an old post each week. This one isn’t anything special except that I consider it a sort of monument to the hardest period of my life {so far}. Last week was the sixth anniversary of when my husband almost died of complications from E.coli 0157:H7. I always take the anniversary week to be thankful for God’s mercy — for the fact that I am not a widow, and that my six- and eight-year-olds know their daddy. It doesn’t always work out that way.

The post is called Guidelines for Visiting Josiah. I wrote it on June 10th, 2009, and my husband was in the ICU on life support. I don’t know if this was before or after his medically induced coma {to stop his grand mal seizures}, but I know he was unable to breathe on his own. At the time, the blog and my twitter account were a way that I communicated with everyone at once. I didn’t have the emotional energy to keep answering the phone and having the same conversation over and over, despite the fact that I knew everyone meant well.

Early in our homeschooling days, I ordered a book that never arrived. Whether the seller was dishonest, or whether it was lost in the mail, I never knew. I didn’t realize the book hadn’t arrived until it was far too late. You see, I order all our assigned school books in the summer, and this book was for the third term.

This was terribly upsetting to me because my homeschool budget was minuscule and while the book was less than $20, that was a lot to me. And now I’d spent it, and had nothing to show for it, plus I still needed a book and didn’t have the money for it. I don’t even remember how we worked it out. I just remember how upset I was that I had let this happen.

It was then that I started tracking all of my summer school purchases in a simple spreadsheet. Every time I order something for school, it goes into the spreadsheet, along with the name of the website where I ordered it. There is a third column, too: a place to check off that I received it.

During the year, I don’t usually need to do this. I remember what I’ve ordered, and I know when it’s late. But in the summer, the first thing I do is order a boatload of books, and it is very easy to lose track. This habit saved me money last year when I had two books lost in transit.

I don’t care how you do it — you can write it in your bullet journal, keep it in Evernote, or use a spreadsheet like I do. Just do it: keep track of what you are ordering and note down when it arrives. You will thank yourself!